We use cookies to provide you with a better experience. By continuing to browse the site you are agreeing to our use of cookies in accordance with our Privacy Policy.
×
Home » 1250 W CW RF Transistor in Plastic 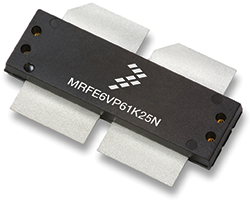 Long after most semiconductor devices had transitioned to plastic packages, RF power transistors remained in ceramic packages, due to a combination of performance and established manufacturing practices. In the past decade, the shift towards plastic packages accelerated in the high volume wireless infrastructure segment, with devices for cellular base stations now preferred in plastic. In February, Freescale Semiconductor introduced two new LDMOS devices for industrial applications. With power levels of 600 and 1250 W, these are the industry’s highest CW power transistors in plastic packages.

The biggest advantage of using plastic packaged power transistors is their improved thermal performance. Plastic packages use a copper heat spreader, on which the die is mounted, while ceramic packages use a copper-based laminate heat spreader. The benefit is 15 to 30 percent better thermal resistance, depending on the transistor. The new Freescale 1.25 kW power transistor (MRFE6VP61K25N) in plastic features an Rjc of 0.06°C/W (soldered), compared to 0.15°C/W for the ceramic version (MRFE6VP61K25H) (bolted down with thermal grease). It is indeed important to solder high power RF transistors rather than bolting or clamping them down. Solder mounting provides good, consistent thermal and electrical contacts between the package source and heat sinks. This improves the thermal and electrical performance of the device. The thermal resistance of Freescale’s high power plastic packaging is lower than traditional industry plastic packages; Freescale’s process provides a superior die attach to the flange.

This thermal advantage either relaxes the design requirements for cooling, reducing system cost, or provides better design margin and MTTF. For example, at 100 MHz where the device operates with 80 percent efficiency, the junction temperature of the ceramic package will be 112°C with the transistor flange at 65°C. The plastic version reduces the Tj to 84°C. Plastic packaged devices have tighter dimensional tolerances than ceramic. The key dimensional specifications on a plastic part (e.g., seating plane height) have tolerances on the order of ±3 mils (±76 micron) or better. Ceramic packages have tolerances typically in the range of ±5 mils (±127 micron) or higher. This makes plastic devices more suitable to automated manufacturing processes such as pick-and-place and surface-mount reflow. Additionally, making the leads and flange of the plastic package with tin-plated copper reduces the thermal expansion mismatch between the leads and the printed circuit board. This improves the reliability of the solder joint and, ultimately, the power amplifier.

Over the years, Freescale’s reliability tests and qualification efforts for various devices in over-molded plastic packages have accumulated 3.5 million device hours at various temperatures and test conditions. Similar measurements were done with Freescale’s ceramic devices. Based on the accumulated test hours, failure in time (FIT) rate and mean time to failure (MTTF) have been calculated for both package platforms at various maximum junction temperatures under field use conditions. Figure 1 compares the MTTF for products in over molded plastic and ceramic packages.

Over the 87.5 to 108 MHz FM band, the performance of the plastic packaged transistor is similar to its ceramic predecessor (see Table 1). It is an extremely rugged device, surviving a 65:1 VSWR – the same high-mismatch environments as a ceramic transistor. These include such applications as CO2 laser or plasma generation, particle accelerators, MRIs, industrial heating/welding systems and FM and VHF broadcast transmitters.

The 1250 W (MRFE6VP61K25N)and 600 W (MRFE6VP6600N) devices complement Freescale’s family of extremely rugged transistors. The portfolio now comprises five power transistors in ceramic and five in plastic, addressing all output power needs from 25 to 1250 W. Freescale’s new plastic-packaged transistors deliver the RF performance that is traditionally associated with devices in ceramic, with even better thermal and mechanical characteristics for higher reliability.