We use cookies to provide you with a better experience. By continuing to browse the site you are agreeing to our use of cookies in accordance with our Privacy Policy.
Home » Low Cost Vector Signal Generator Features 100 MHz Bandwidth 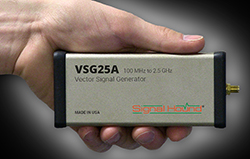 Signal Hound takes a different approach. While others strive for unprecedented performance at any cost, the $495 Signal Hound VSG25A vector signal generator delivers good performance at unprecedented value. Featuring a frequency range of 100 MHz to 2.5 GHz, output amplitude from -40 to +10 dBm and 100 MHz of modulation bandwidth, the VSG25A covers most telecom frequencies as well as two major ISM bands (902 to 928 MHz and 2.4 to 2.5 GHz). The low end goes down to 80 MHz with reduced amplitude accuracy, covering the FM broadcast bands. The VSG25A is USB powered, weighs 130 grams and easily fits in a shirt pocket. 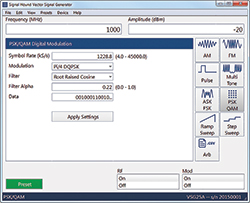 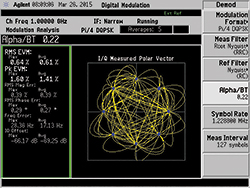 The digitally generated AM and FM waveforms are quite accurate. Total harmonic distortion for sine wave modulated FM is typically below 0.02 percent. Pulse modulation features typical rise and fall times of 3.5 and 2.5 ns, respectively (measured at 2450 MHz). Pulse widths can range from 6 ns to 25 ms. Pulse width resolution is typically better than 0.1 percent, even at 6 ns — the VSG25A can produce a 6.01 ns pulse as easily as 6.00 ns. The on/off ratio is typically greater than 50 dB, which is adequate for many applications. Duty cycle may be as low as 0.00025 percent (pulse period ≤ 1.0 s) or as high as 99.9 percent (off time > 6 ns). This is generally sufficient for a broad range of tests. 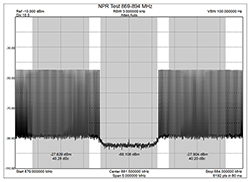 The Signal Hound VSG25A’s multi-tone generator presents interesting opportunities for intermodulation testing, including noise power ratio (NPR). NPR testing gained a lot of attention in recent years for its ability to better emulate multi-carrier systems than two-tone IP3 (third order intercept point). Traditional NPR testing with additive white Gaussian noise (AWGN) is a fairly old method for testing intermodulation distortion. It uses a noise source with a band reject filter to notch out the middle of the signal. Modern NPR testing uses a synthetic noise technique by generating sets of over 1000 tones, having random phase relationships to each other, combined with the absence of tones in the center of the test pattern. This requires a modern high-bandwidth vector signal generator. A PC driving the Signal Hound VSG25A can accomplish this easily.

Generating 1001 tones with equal spacing and a selectable notch is as simple as entering the total tones, tone spacing and number of notched out tones (see Figure 3). The local oscillator feedthrough can even be tuned out manually. The phase relationship between tones can be random, for NPR testing, or parabolic, for generating minimum peak-to-average power ratio signals. The user interface has an efficient workflow and can load random phase tone sets as often as every second, to average measurements and reduce uncertainty. When combined with a Signal Hound BB60C spectrum analyzer, 40 dB of effective NPR dynamic range is achieved. To increase the dynamic range to 55 dB, a spectrum analyzer similar to the Keysight PSA series can be used. Synthetic NPR testing is a powerful and flexible approach to multi-carrier intermodulation tests that formerly cost tens of thousands of dollars to set up. Now thorough and efficient NPR testing can be accomplished with the VSG25A and a spectrum analyzer.

The VSG25A can create a modulation signal with a custom or arbitrary waveform. I/Q waveforms can be built using third-party software packages, such as Matlab by MathWorks®, and pasted into a CSV file. The CSV input file, which can be modified with any spreadsheet software, controls the center frequency, amplitude, baseband clock rate, number of samples and signal period, followed by the actual samples. A chirp radar signal file is provided as an example.

Using the VSG25A as a sweeper is somewhat limited. It can sweep in the faster ramp sweep mode or more slowly using the step sweep mode. Ramp sweep time is limited to ≤ 10 ms for a 1 MHz span and ≤ 1 ms for a 10 MHz span. This is not the best product if the primary use is to be a synthesized sweeper.

To achieve this price point, design tradeoffs were required: reduced filtering, a mechanically-adjusted time base and limited pattern memory. The baseband uses a 12-bit digital-to-analog converter (DAC) with excellent linearity and a flexible clock rate of < 60 kHz to 180 MHz; however, it has no reconstruction filter to reduce DAC aliasing, which results in distinct out-of-band spurious in most modulation modes (see Figure 4). A single 2.5 GHz lowpass filter provides harmonic rejection, so a 1.9 to 2.5 GHz output will have low harmonics; however, an 800 MHz output will have a strong third harmonic, requiring an external filter for some applications. The voltage-controlled crystal oscillator (VCXO) can be mechanically adjusted to ±1 ppm after initial warm-up, but it will drift about -0.2 ppm/°C as the internal temperature changes. Finally, the pattern memory is limited to 4096 instantaneous frequencies, or 2048 I/Q pairs, and the pattern period (except for short pulses) is limited to 64K samples. This also imposes some limitations. For example, repeating pseudo-random binary sequences (PRBS) for digital modulation are limited to 9 bits (PN9).

As a low cost vector signal generator, the VSG25A offers a lot of bandwidth for a very low price. With its limited filtering and small pattern buffer, the VSG25A is not for everyone. Yet, at $495, this little gem is likely to become disruptive to the VSG market, putting 100 MHz of arbitrary waveform generation into almost any engineer’s or technician’s hands without any delays from forecasting capital expenditures. The VSG25A comes with a two-year warranty and a 30-day money back guarantee. Deliveries are off-the-shelf, so orders normally ship within one business day.