We use cookies to provide you with a better experience. By continuing to browse the site you are agreeing to our use of cookies in accordance with our Privacy Policy.
×
Home » X-COM Systems introduces real time RF signal recording and playback system
Aerospace and Defense Channel Industry News

X-COM Systems LLC, a subsidiary of Bird Technologies, introduced the IQC91000A, the only RF and microwave signal recording and playback system that can capture, digitize, and store up to 1000 MHz of the electromagnetic spectrum in real time without gaps and missed signal events within any frequency range from 500 MHz to 18 GHz with 50 dB of spurious-free dynamic range, the highest in the industry. The entire 1000-MHz signal capture file or selected portions of it can be regenerated and played back at virtually any desired center frequency and offloaded at high speed to a workstation for analysis. The IQC91000A is uniquely suited for signals intelligence (SIGINT) and electronic intelligence (ELINT) applications, interference detection, and testing and validation of radar, electronic warfare, and commercial and military wireless communications systems. 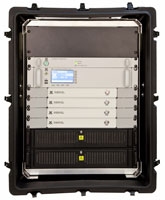 Unlike a swept receiver that scans the spectrum within a specific frequency range at high speed and can detect signals within it, the IQC91000A has an instantaneous (fixed) capture bandwidth of 1000 MHz that allows it to collect detailed information about the signals within it as In-phase (I) and Quadrature (Q) data. This allows detailed analysis of the signal’s characteristics to be performed using MATLAB as well as vector signal analysis tools such as Keysight Technologies’ 89600 and Tektronix SignalVu-PC. The system supports MATLAB class definitions, so users can operate on specific data samples of interest identified by date, time, scale factor, and other parameters, and eliminates the need to manually construct the information required to access the data.

All subsystems in the IQC91000A, from signal capture to digital storage, are optimized to eliminate throughput bottlenecks that can drop samples and create potential recording gaps. The result is that recording, triggering, and data markers all perform together in real time. The IQC91000A’s receiver captures signals anywhere between 500 MHz and 18 GHz and downconverts them to an intermediate frequency whose output is digitized with 12-bit fidelity at up to 3.2 GSamples/s. This signal capture file is sent to the system’s internal SSDs that collectively have 30 Tbytes of capacity. This signal-capture file can then be offloaded at 600 Mbytes/s or faster via eight lanes of PCIe 2.0 to a workstation for analysis.

For owners of Keysight instruments, the IQC91000A can be specified without its internal downconverter and can instead be used with Keysight Technologies PXA and UXA Series signal analyzers that have an IF bandwidth up to 700 MHz. For playback, the IQC91000A can be used with Keysight’s PSG Series signal generators for upconversion (and playback) of recorded signals up to 44 GHz as well as the R&S SMW200A for upconversion to 20 GHz.

The IQC91000A has two ports for external triggers that allow a recording to begin based on frequency mask and other triggers from external hardware, on a signal’s rising or falling edge, and using Boolean AND/OR logic, time of day, or gate triggering. The latter lets users define a time window when an event will be recorded, so only the desired part of a signal is recorded and non-relevant signals are excluded.

It can, for example, trigger when a radar changes modes or when a new “emitter of interest” appears so the user can simply go directly to the start of the event in the recording rather than sorting through the entire file to find it. This dramatically reduces storage requirements as only the information is recorded. The IQC91000A has IRIG B and GPS inputs so it can place a marker on a sample that includes the time it was recorded to within 1 µs as well as the latitude, longitude, and elevation when it was taken.

The IQC91000A ships with a declassification procedure that can satisfy even the most security-conscious organizations, allowing the instrument to be moved in and out of classified environments. The system can be “scrubbed” of all information on every component that can store user data, replacing it with factory default values.

The IQC91000A is available in a rugged portable or standard rack enclosures and be specified in several versions with varying capabilities as well as X-COM’s rack-mounted SigAnalyst workstation. This high-performance system employs dual Intel Xeon processors, 64 Gbytes of RAM, 80 Tbytes of hard drive storage in RAID 6, and a 16-port serial-attached SCSI switch. It also includes X-COM’s Spectro-X signal analysis software and RF Editor software. Other options are available as well.