We use cookies to provide you with a better experience. By continuing to browse the site you are agreeing to our use of cookies in accordance with our Privacy Policy.
×
Home » Small cell backhaul market to exceed $5 billion by 2019
Industry News

Millimeter wave technology—thanks to its large bandwidth and NLOS capability—is the fastest growing technology in our forecast, outpacing the overall market with over 100 percent CAGR between 2014 and 2019. Sub 6 GHz technology will capture the largest share of small cell backhaul “last mile” links, also outperforming the total market by 2019. Traditional microwave equipment remains a top technology for small cell backhaul applications with a leading share of revenue and one-fourth share of links in 2019. 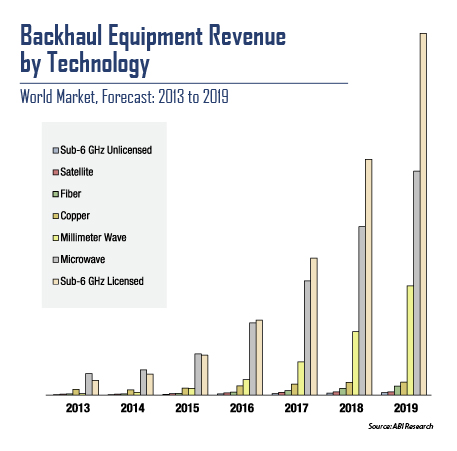 “We believe that 4G/LTE small cell solutions will again drive most of the microwave, millimeter wave, and sub 6 GHz backhaul growth in metropolitan, urban, and suburban areas and also backhaul for 4G/LTE small cells will grow at 2X the rate for 3G and surpass both 2G and 3G in 2016,” says Nick Marshall, research director at ABI Research.

"While the North American and Asia-Pacific regions today are equivalent in market share we forecast that it is the Asia-Pacific region which will outperform the market with 2X to 3X the size of any other region, though North America and Europe will also outperform the market,” continues Marshall.  Leading vendors such as Alcatel-Lucent, NEC, Ericsson, DragonWave, Ceragon, Aviat, CCS and Siklu are among the vendors which stand to benefit from this growth.