We use cookies to provide you with a better experience. By continuing to browse the site you are agreeing to our use of cookies in accordance with our Privacy Policy.
Home » 2012 Market in Review: Microwave Radios
Cellular 4G/LTE Channel WaveGuide

Over the past six years the microwave market has had its peaks and valleys, with 2012 ending on the lower end of that range. Microwave radio’s main application is mobile backhaul, especially for traditional macro cells.  If mobile operator spending weakens, so does the market.  In 2012, the issue wasn’t so much the amount that mobile operators were spending but more where operators chose to spend those dollars.  Macro-cell spending flattened out as operators focused on increasing data capacity with small cells.  In addition to the focus on small cells, the sluggishness of the market can be attributed to a couple of factors.  One, volumes for Hybrid and TDM microwave radios continue to decrease as operators transition networks to packet for data and LTE 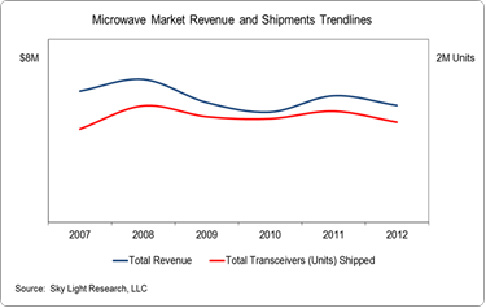 networks.  Two, regional nuances, in areas like India and Europe, continue to negatively impact sales.  Although India is seeing signs of recovery, the rollout hiatus has not subsided. Further, economic concerns in Europe have slowed mobile network deployments by major mobile operators, especially in Western Europe.

Despite the negative factors inhibiting the market, positive factors remain - such as a growing packet based market; continuing roll outs of LTE networks across the globe; positive interest in Millimeterwave radios for small cell and macro cell in-fill; and strong vertical markets especially in the energy sector.

SIZE DOES MATTER
The market has traditionally been dominated by large end-to-end telecom equipment providers who have a strong global presence, and 2012 was no different.  The leaders in 2012 include Ericsson, Huawei, NEC, and Alcatel-Lucent.  Ericsson leads the market thanks to its strong embedded base of operators throughout the world as well as a broad microwave portfolio and an end-to-end mobile network portfolio.  The bulk of Ericsson’s microwave sales are Hybrid short-haul radios. Although hybrid radios have been outpaced by packet radios, hybrid radios continue to be used by mobile operators as they transition their networks to data, but want organic transport for their legacy TDM.  In addition, many of Ericsson’s product enhancements over the last 12-18 months are now hitting the market and enabling it to keep the top spot with roughly a quarter of the market.

Despite Ericsson’s long standing number one position in the market, Huawei is closing in on them.  Huawei has won several key LTE deals in the past 18 months and should see growth from these deals over the next few years.  Huawei’s increase is due to strong global sales especially in developing markets.  Recently, Huawei won large tenders in India with operators Bharti and Vodafone.  Huawei sees operators with a global presence as key to their strategy and is aggressive in winning these bids.  Extremely aggressive prices, coupled with their end-to-end product line make them a formidable competitor in large mobile operator accounts. 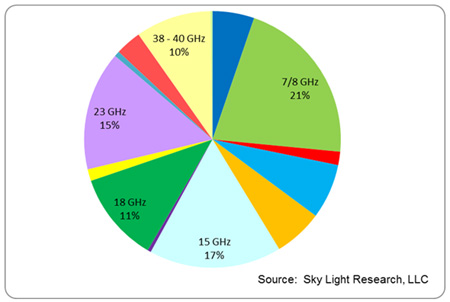 The market in 2012 centered on a handful of frequencies for a couple of reasons.  Besides being available in almost every region of the world, these frequencies also have excellent propagation characteristics.  The only exception to this rule would be the 38-40 GHz spectrum, which is more sensitive to poor weather conditions.  Europe, Middle East, Africa, Southeast Asia, and Latin America all are heavy users of the 7/8 GHz spectrum, while 15, 18, and 23 GHz are used globally, due to its all-encompassing characteristics – high enough frequency for capacity requirements, but low enough to dodge the impact of inclement weather.

MOBILE BACKHAUL IS WHERE IT’S AT
Mobile backhaul continues to drive the demand for microwave radios and is the predominant global application in every region including the USA.  Although mobile backhaul is a key piece of the microwave market in the USA, the market is slightly different from the rest of the world in that much of the market is also heavily driven by special projects from other verticals like energy, utility, and municipality markets.   These non-mobile segments are often sold through distributors and are made up of many small deals, as opposed to the mobile market which is characterized by few very large deals.  Each of the main global microwave vendors generates the majority of their shipments from mobile operators.

The mobile market has remained relatively steady over much of 2012, however on an annualized basis it decreased compared to 2011.  As mentioned earlier, the mobile market is challenging as the dollar is stretched among various needs in the network.  Small cell and data increasing technologies are getting most of the attention, with the macro network being secondary at the moment. 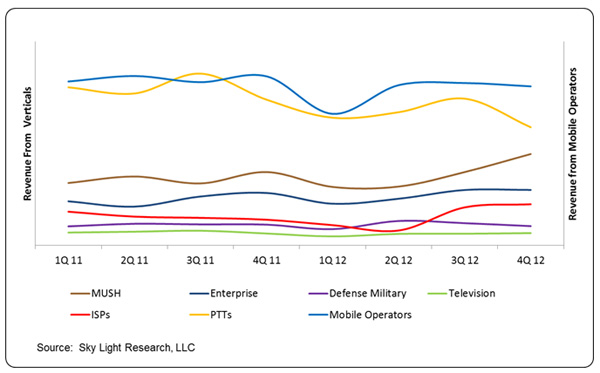 Although PTTs or fixed telephone companies are the second largest market for microwave radios, the segment decreased substantially in the quarter mostly due to the timing of project cycles.

Defense/military decreased for a second consecutive quarter, while MUSH (municipalities, utilities, schools, and hospitals) increased in the last quarter of 2012.  Often, publicly funded enterprises, like city governments and schools have fiscal budgets that they either use or lose, which creates a cyclical spike in 4Q.  In addition, oil and gas (utilities), has seen a lot of growth in the use of microwave as they connect drilling sites, which also is driving the MUSH vertical.

About Emmy Johnson and Sky Light Research:  Emmy is the Founder and Principal Analyst of Sky Light Research, a third-party analyst firm specializing in wireless point to point mobile backhaul technologies such as microwave, sub 6 GHz, and millimeterwave radios.  The firm’s popular services include quarterly market share reports and forecasts.  Sky Light Research was founded in 2001 and is located in Scottsdale AZ, USA. For more information, please email info@SkyLightResearch.com or call +1.480.563.2251.