We use cookies to provide you with a better experience. By continuing to browse the site you are agreeing to our use of cookies in accordance with our Privacy Policy.
Home » Low Power, Low Noise and Power Amplifiers: Design and Optimization

Dr. Ali Abuelmaatti graduated with a first class Honours degree from the School of Acoustics and Electrical Engineering at the University of Salford, Greater Manchester, UK, in July 2002. From October 2002 until June 2005, he was with Micrel Semiconductors working as a Research Engineer as part of a research program with the Institute for System Level Integration in Livingston, Scotland, UK. With Micrel, his research was focused on incorporating ZigBee (IEEE 802.15.4) as the platform for the Tyre Pressure Monitoring System (TPMS) application. He then joined the University of Glasgow, Scotland, UK, as a PhD student, receiving his degree in July 2008. His PhD research was focused on RF CMOS circuit design and device modelling methodologies. He is currently working with RF Micro Devices (RFMD) UK in Newton Aycliffe, Durham, as a Device Modelling Engineer, developing high frequency nonlinear behavioural models for active GaAs devices, mainly pHEMT transistors.

To comment or ask Dr. Abuelmaatti a question, use the comment link at the bottom of the entry. The first 5 people to comment will receive a copy of the Electrical Engineering Handbook (please include your e-mail and mailing address).

In this age of fast time to market requirements, RF front-end designers are increasingly dependent on Computer Aided Design (CAD) tools for fast and first-time-correct designs. Furthermore, with the existence of different transistor technologies from different foundries, the need for CAD tools becomes even more significant as theoretical design methods may need to differ from one technology to another, or from a technology made by one foundry to another. But effective use of CAD tools can only be possible if combined with a global (circuit-specific) valid design methodology in order to deliver those robust results, and deliver them fast. RF circuit design is similar to any other analog circuit design in that achieving acceptable performance parameters (including requirements and constraints) not only relies on the ability of the designer to strike valuable and convenient trade-offs using design parameters but also on the ability of the designer to extract the full potential of the available components in achieving the needed performance.

A review of the design approaches behind some of the recently realised and reported CMOS low noise amplifiers meeting challenging performance requirements reveals that these design approaches lack accurate, flexible and informative simultaneous analysis of performance requirements. The optimal design methodology is one that would simultaneously consider all performance requirements against all design parameters. But as the number of circuit components and/or the number of required performance parameters increase, this becomes increasingly difficult to attain. The latter is the case with the target design of this work which requires an amplifier based on the popular Common Source Common Gate Cascode architecture to achieve acceptable performance when operating as both a Low Noise Amplifier (LNA) and a Power Amplifier (PA) for the relatively low power ZigBee (IEEE 802.15.4) front-end.

Optimisation of the Core Circuit Components

The core amplifier circuit (i.e. excluding the matching) to be optimised in this work is shown in Figure 1. It includes the two cascode transistors, the degeneration inductance, and the load inductance.

The optimisation procedures are developed bearing in mind that the inductors in the cascode architecture will only insignificantly affect the DC characteristics of the amplifier due to their relatively small internal resistances. Therefore, the DC analysis can safely be done on the two cascode transistors only without including the inductors, and the results will still be valid when inductors are added. Also, although the effect of these inductors on RF performance is well understood, tests show that in the cascode architecture, a compromised configuration (bias point and device width) for the cascode transistors produced from analysis of the circuit conducted without the inductors cannot be different than if the analysis was undertaken with the existence of the inductors, and hence the transistors cannot have a better configuration. In other words, although including the inductors will change the resulting circuit performance, if the optimisation (without the inductors) to select a suitable configuration for the two cascode transistors was performed with the inductors in place, then the chosen configuration for the transistors (based on the same judgement procedures) would have been the same. However, it is important to emphasise that this assertion is only valid for the Cascode LNA architecture due to the limited range of values of inductors that are commonly considered for use as either a degeneration inductance in the source of the CS stage or as a load inductance in the drain of the CG stage. Analogy can be made between this and operating on a small section of a nonlinear curve where the small section can be considered linear.

With appreciation of the above assertion, the first step in optimising circuit components is to tune the sizes and biases of the two cascode transistors; this is done on the circuit in Figure 1. This is the simple cascode architecture without the inductive degeneration. 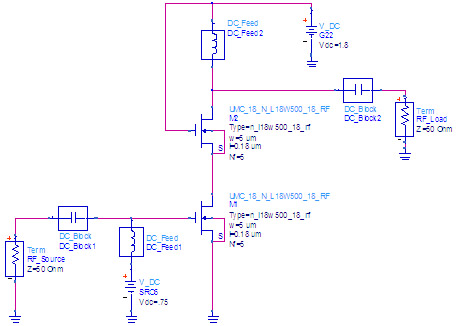 The general approach is to examine all the low and high-power performance parameters concerned against a sweep of sizes of the CS and CG transistors, after appropriately setting the bias voltages at the gates of each stage.

In Figure 1, the gate of the common-gate transistor is connected to the amplifier’s . It has been shown in [1] that the third-order input intercept point (IIP3) of the second stage can be enhanced by increasing VGS2. But VGS of transistor M2 is also determined by the voltage between the two stages, hereafter called the “mid-voltage”, which is affected by VDD (the bias voltage on the drain of  M2 and the sizes of both transistors, and it can affect current consumption even though this is predominantly controlled by the common-source stage. Hence, to increase flexibility and reduce the scope of possibilities, the gate of  M2 is assigned a maximum voltage by connecting it to VDD. This does not constitute a constraint on VGS2 since full control over it will still be available through controlling the sizes of both transistors, as will be demonstrated in the DC analysis. The bias voltage of the CS transistor is adjusted with respect to its noise performance. The RF choke placed on the drain of the CG transistor isolates the supply voltage from the amplifier RF output, and keeps the amplifier independent, for now, of any specific load impedance for the purpose of optimisation. The comprehensive DC analysis undertaken investigates the nature of variations of the DC current and the mid-voltage subject to varying transistor sizes.

The noise performance of the cascode architecture is investigated with emphasis on the bias and size of the CS transistor as the dominant contributor to noise in the amplifier. The most suitable CS gate voltage produced from this analysis will be used as a fixed value for the rest of the optimisation process. This does not imply any limit or constraint on any other performance parameters since the current of the CS transistor, which controls the current of the circuit, is equally dependant on its gate voltage and size in the simulated range.

Power, gain and nonlinear analysis are performed by investigating the effect of varying the sizes of the CS and CG transistors on several performance parameters at low and high input powers.

The final step in setting the core circuit parameters is performed by tuning the load inductor. This step is carried out after the transistor sizes and the degenerating inductor have been chosen. The load inductor has a considerable effect on two performance parameters; power gain and stability. The stability of the final amplifier circuit will depend on the impedances presented to the amplifier at the input and the output. In the best case, the core amplifier circuit (before matching) should present unconditional stability. This gives the designer more flexibility in matching the circuit for other performance parameters such as noise, gain and harmonic termination. However, trying to peruse this goal at the beginning of the design flow will significantly complicate the design process, add to design time and may result in unnecessary constraints on other desired performance parameters. Instead, this step is left as the last step in the design of the core amplifier, and the value of the inductor can be decided as a simple trade-off of how it affects stability and gain only.

In the light of this, a better approach for optimising the auxiliary transistors is to choose the width of the core transistors based on the various amplifier performance parameters (such as noise, gain, PAE, etc.) and then linearize that by multi-gate transistor (MGTR). Since it does not significantly affect the DC current in the cascode, adding the auxiliary transistors will not affect any other performance parameters set by optimising the main transistor, but will only improve its linearity.

The linearisation by MGTR method will still be valid at the relatively high power for PA operation because although the instantaneous gm will change with higher powers, the average gm (around the DC bias) will remain the same.

The harmonic termination is incorporated within the source- and load-pull analysis which is extensively extended (by increasing the number of simulated-for impedances) to take into account all possible terminations. The effect of any impedance representing considerable termination to any frequency component which contributes to the third-order intermodulation distortion (IMD3) will be reflected in the input or output contours and can then be picked by the designer for matching.

In the proposed design methodology, matching the amplifier comes as the last step after setting the core circuit parameters and applying linearisation; this is because these two processes contribute to the impedances seen at the input and the output of the amplifier core circuit. In high power operation, small signal matching techniques are no longer valid; because they are primarily based on S-parameters which is essentially a small signal-only analysis. For example, the load of the amplifier cannot be matched for maximum power transfer with the conjugate matching requirements obtained from S-parameter measurements when the amplifier is operating at its 1dB compression point which is a large-signal operating condition. Instead, source and load pull simulations must to be performed. Source and load pull simulations consider a number of different matching impedances spread across the Smith chart (pre-specified by the designer) and investigates the response of the circuit in terms of obtainable performance parameters when these impedances are presented to the input and the output of the core amplifier circuit, respectively.

The matching of the amplifier could be investigated by simultaneously considering low and high power matching techniques, giving the designer the flexibility of selecting the desired trade-off.