Crane Aerospace & Electronics announced a series of enhancements to its popular MTR Series of 30 watt, high reliability dc-dc converters. According to Ed Fuhr, vice president of power solutions, “the MTR Series was enhanced to provide broader compliance to industry standards and in support of more application requirements of its global users.”

Crane Aerospace & Electronics announced the introduction of a new, down-leaded version of its Interpoint MFP Series Point of Load (POL) converters. This new version, available in both flanged and non-flanged packages, is a single output 16 watt dc-dc converter providing output voltages from 0.64 to 3.5 V from a source voltage of 3 to 6 V with up to 90 percent efficiency.

Crane Aerospace & Electronics, Power Solutions expands its list of products for immediate delivery. The FMCE Series™ are the next-generation.

Crane Aerospace & Electronics congratulates National Aeronautics and Space Administration (NASA) on the successful landing of Curiosity on the Gale Crater, Mars, with InterpointTM dc-dc converter and EMI filter modules on board. Curiosity’s goal is not to find Martian life, but rather to seek out carbon-based organic compounds that are the building blocks of life, and then to determine whether the Gale Crater landing site was ever suitable for creatures. The Mars Science Laboratory (MSL) was launched from Cape Canaveral Air Force Station on November 26, 2011 via an Atlas V rocket. 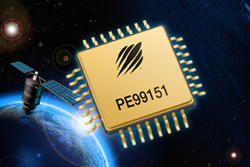