We use cookies to provide you with a better experience. By continuing to browse the site you are agreeing to our use of cookies in accordance with our Privacy Policy.
Home » Blogs » Pat Hindle, MWJ Editor » Metamaterials Realize Many Practical Applications at Fractal Antenna

We found the source of the Romulan’s cloaking device

Metamaterial-based technologies have a come a long way in the past few years and have realized many practical applications. One company leading the charge for the last 20 years is Fractal Antenna Systems of Waltham, MA.  I had the pleasure of visiting Fractal Antenna right before the holidays and was able to learn about the technology and video a couple of demonstrations. They use fractals to manufacture antennas and related devices such as filters, metamaterials, cloaks, diffusers, and absorbers that are typically smaller, wideband/multiband solutions that are lower cost than traditional components. The products are typically PCB trace patterns so are simple to manufacture and avoid other L and C components or expensive, exotic dielectrics that are in many other metamaterial-based solutions. The bandwidth of these materials is impressive as you can see in the demos below.

The company was founded in 1995 by Nathan Cohen, a physicist and radio astronomer, with the mission to design and provide unique antenna and electronic solutions using their proprietary fractal-based technology.  Their patented technology has created more than 1000 publications in the last 10 years signaling a wide shift in how antennas and related hardware can be made. I think that coming from a different industry and background, Nathan created a paradigm shift as he was able to bring a different perspective to the way fractals are designed and used in products. I was surprised that they had been around for so long and producing so many different kinds of products using fractals as this is their 20th year in business.

From their web site I found this good description of fractals: A fractal element antenna is shaped using fractal geometry. A fractal is “self similar”—a complex pattern built from the repetition of a simple shape. The inherent qualities of fractals enable the production of high performance antennas that are typically 50 to 75 percent smaller than traditional ones. Typical advantages play out in increased bandwidth/multibandedness and gain in addition to smaller size. Additionally, fractal antennas are more reliable and lower cost than traditional antennas because antenna performance is attained through the geometry of the conductor, rather than with the accumulation of separate components or separate elements that inevitably increase complexity and potential points of failure and cost.

The company started out doing mostly military work but has diversified and does much more commercial work now.  They make elements, metamaterial devices, arrays, MIMO antennas, etc. and their products are inside of many devices that serve industries such as wireless, M2M, cellular, broadcast, medical, DAS, telematics, radar, aerospace, sensors, asset management and so on.

Nathan and his team setup a couple of EM cloaking demos for me which was a great experience. He showed me the fractal shapes that are used for these types of applications and explained how they work which was very interesting because I never know the specifics of the technology.  He showed how the reflected waves are cancelled out by the backscattered waves from the surface. The incident waves also create surface waves that travel around the object and recombine on the other side so appear as if there was no object present when detected there. The fractal shaped patterns are unique in that they are very wideband (up to 10:1 bandwidth can be achieved). In the video demos below, the 2 layer structure around the pipe achieves about a 2.5:1 bandwidth in the first demo and the second demo with 1 layer around a person achieves about 25% bandwidth.  View the video demos below to see how it works.  This is cool science! 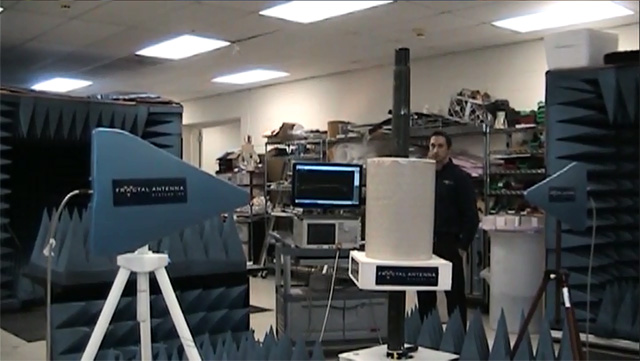 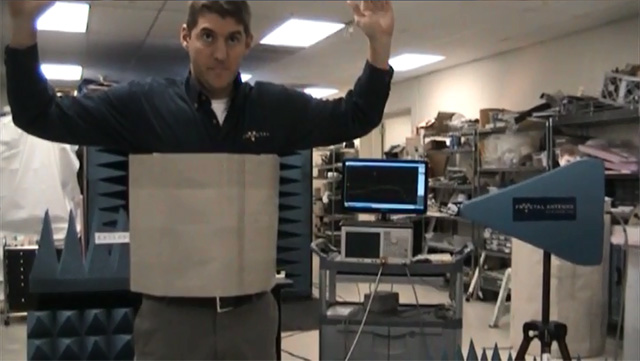