We use cookies to provide you with a better experience. By continuing to browse the site you are agreeing to our use of cookies in accordance with our Privacy Policy.
Home » Blogs » Pat Hindle, MWJ Editor » Pat's Predictions - 2012 Microwave Forecast

Patrick Hindle - Editor, Microwave Journal
One Comment
It is that time again, I have made my Microwave Industry predictions for 2012: 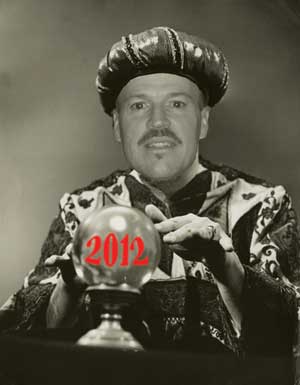 2. LTE continues to grow rapidly taking over the infrastructure market and people start talking about 5G.

8. Test and measurement convergence continues at a rapid pace as suppliers combine multiple tests systems into a single box.

11. Radar sensors become an affordable option in some standard car models (instead of only premium brands such as Mercedes and Audi).

12. UAVs are the only bright spot for Defense spending as cuts are made in most other areas.


2011 Industry predictions and outcomes (let's see how I did last year):

1. Tunable devices and circuits like RF MEMS and switched capacitor banks will be adopted in cell phones and alleviate some of the antenna reception issues that plagued phones like the iPhone 4.
This started to happen to some extent but was limited so maybe this was half correct.

2. Smart Grid applications will take off this year with ISM and Zigbee wireless applications being widely implemented around the world.
While this was talked about a lot, I not sure it really took off so maybe in 2012.

3. LTE will dominate the 4G networks as it is implemented around the world and zooms past WiMAX in deployments.
This definitely happened in a big way as CTIA and MWC were dominated by LTE along with deployments worldwide.

4. Femtocells, WiFi and other shorter range wireless technologies will be implemented to get around cellular dead spots instead of just deploying more basestations to fill in coverage.
This occurred to some extent again, but not in a big way so only half credit.

5. Metamaterials will start to be used in real world devices for filters and other passive devices (maybe even radar cloaking for the military).
While there continues to be research in this area, it did not happen in any meaningful manner.

6. Adaptive/Cognitive radar and communication systems will go into real development programs.
There was some activity in this area but it was limited.

7. Millimeterwave frequency solutions will dominate the new backhaul and satellite communications deployments.
Same as above.

8. SOI and SOS based switches will start taking market share from the traditional dominant GaAs markets.
This started to occur as the Peregrine SOS switches have made in-roads and companies such as Skyworks and RFMD are now producing quality SOI switches which I expect to see more of this year.

9. The confusion of the definition of 4G technologies will continue while someone will define and start using the term 5G.
The confusion definitely continued but I never heard anyone mention 5G.

10. Microwave applications will see significant use in medical technologies to enhance cures for diseases such as cancer.
I keep hoping for this one to occur more than any other prediction, so I once again added a similar prediction this year but only limited progress has been made in microwave medical technology.

Let me know what you think will happen in 2012.

We appriciate the article and we are very...

This article is very good and we are...

Electro-optical oscillator based synthesizer that generates frequencies up...