We use cookies to provide you with a better experience. By continuing to browse the site you are agreeing to our use of cookies in accordance with our Privacy Policy.
Home » Blogs » 5G and Beyond - National Instruments » The Global Spectrum Challenge for 5G

5G and Beyond - National Instruments

The Global Spectrum Challenge for 5G

Now that there’s an initial draft of the 5G spec (aka 3GPP Release 15), the world’s wireless leaders have achieved a big milestone. However, widespread 5G deployment still faces many challenges. One such challenge is that of global spectrum coverage or more specifically harmonized global spectrum coverage. Harmonized global spectrum is important because with a commonality of spectrum the 5G ecosystem can optimize resources to achieve the economies of scale to spur rapid proliferation and adoption. Quite simply, harmonized global spectrum enables devices to reuse the same or similar components to connect to networks in different geographies. It’s less about international roaming and more about the time to when economies of scale can be realized – in other words, devices become cheaper and businesses and consumers can easily adopt them.

The ITU sponsors the World Radiocommunications Conference (WRC) to harmonize various communications regulations globally, including spectrum coverage. The last WRC held in 2015 or referred to as WRC-15, earmarked several mmWave bands for 5G deployments. Interestingly, the WRC-15 did not include spectrum around 28 GHz where the United States, Japan and South Korea have announced initial 5G trials. Any individual country can allocate spectrum according to its laws and regulations but the early break from harmonization does raise some concern. One can only surmise that the businesses and governments in these countries recognize a huge opportunity and have chosen to move forward without harmonization at least in the early stages. The tradeoff is between risk and reward.

Being “first” or delivering first of a kind network services has tremendous benefits. The world will recognize these early deployments and note technology leadership, and the economies in these countries may realize a boost in GDP. Limited economies of scale can also be realized as the three countries boast significant mobile phone subscribership and wireless broadband usage. On the other hand, there are still many unanswered questions lingering around mmWave mobile access, and the risks are tangible.

The story for 5G NR deployments below 6 GHz is more optimistic. In Figure 1, global unified spectrum coverage seems to be more of a reality where bands n77 and n78 have the most commonality among the largest regions of the world. Surely, initial deployments of 5G will be below 6 GHz because the jump from traditional 4G LTE spectrum to 5G NR below 6 GHz is viewed as incremental. The 5G ecosystem encompassing semiconductors and infrastructure should be able to develop these 5G technologies in a shorter timeframe and global harmonization. 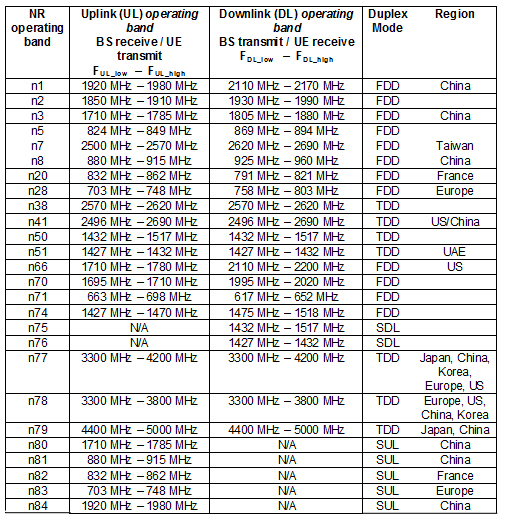 mmWave poses new challenges to wireless communications. From Figure 2, the hope of global harmonization may likely be in the 37 to 40 GHz region. Given the public information regarding 5G mmWave trials in the United States, South Korea and Japan, momentum is building for 28 GHz initial deployments. You can be sure that when these occur the rest of the world will be watching.