We use cookies to provide you with a better experience. By continuing to browse the site you are agreeing to our use of cookies in accordance with our Privacy Policy.
Home » Blogs » Gary Lerude, MWJ Technical Editor » Qorvo is born

RFMD and TriQuint complete the merger announced 10 months ago

Some 10 months after announcing the deal, RF Micro Devices and TriQuint Semiconductor finally consummated their merger and start the new year doing business as Qorvo (listed as QRVO on the NASDAQ exchange).

The combination makes Qorvo the second largest “largely wireless” semiconductor supplier, with projected 2014 revenue of $2.3 billion. That's within 10% of market leader Skyworks, whose 2014 revenue is forecast to be just under $2.6 billion. [1] 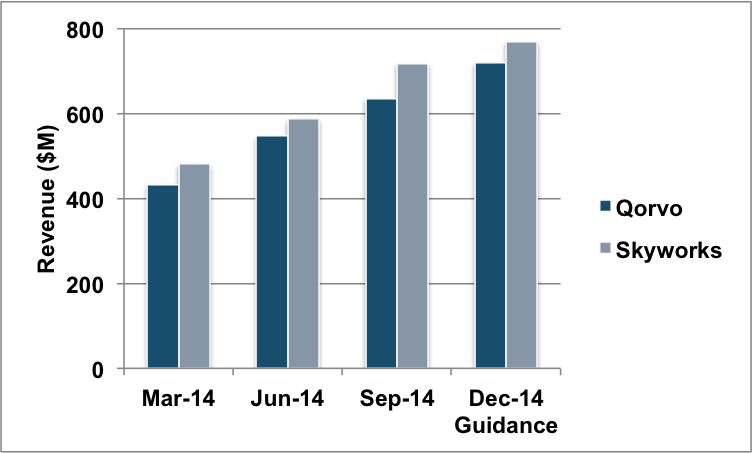 In mobile, Qorvo will compete with Skyworks, primarily, and Avago (mainly high-performance filters) to gain the leading share of wireless components and front-end modules for handsets and tablets. Qorvo will have to defend against threatened silicon disruption, led by Qualcomm and Peregrine (now part of Murata).

In the infrastructure and defense markets, Qorvo arguably holds the strongest position, participating in Wi-Fi, optical, base station, point-to-point radio, CATV, and phased-array radar. They also benefit from government-funded R&D, which has nurtured TriQuint's 15-year development of GaN technology.

They are not immune from competition, however. The acquisition of Hittite Microwave by Analog Devices (ADI) yielded a stronger competitor with about the same scale as Qorvo's Infrastructure and Defense Products (IDP) segment. Although early in its development, ADI's strategy is to offer bits to antenna solutions, which they hope will do an end run around an RF-only strategy.

MACOM also plays in many of the same markets as Qorvo and is an aggressive competitor. MACOM is pursuing a dual GaN on SiC and GaN on silicon strategy, to address both high performance and low cost applications. They have invested heavily in optical networking, through several acquisitions, and have renewed focus on the defense market, seeking to be recognized as the #2 U.S. player.

What should we expect to see from Qorvo this year?

I expect a fierce fight with Skyworks and Avago for every socket available from Apple, Samsung, and the growing opportunities from the Chinese mobile players.

Similarly, Qorvo, MACOM, and Cree will race to see who can lead the commercial adoption of GaN, striking the right balance between “good enough” performance and affordability.

Optical networks will be another competition between Qorvo and MACOM, as both companies seek revenue from the growth of 100G+ fiber-optic networks, spanning data centers to undersea cables.

At the Qorvo investor conference held in November, the company indicated it will make acquisitions to accelerate the growth of IDP. Steve Buhaly, Chief Financial Officer (CFO), said IDP acquisitions will be the second priority for using Qorvo's cash, after investing in additional capacity for premium filters and low-cost assembly and test.

Qorvo has promised the investor community $150 million in synergies, split evenly over the first two years of operation. With three GaAs fabs, multiple design centers, redundancy in corporate functions, and the senior management team spread across three states, one would expect to see consolidation during the year.

While the independent companies RFMD and TriQuint now pass into the historic legacy of GaAs, combining the long-standing capabilities of the two creates a stronger firm and industry. We wish them success and hope that those who are displaced by the combination will also fare well.