We use cookies to provide you with a better experience. By continuing to browse the site you are agreeing to our use of cookies in accordance with our Privacy Policy.
Home » Robust Antenna Solutions For Maritime Surveillance Radar
Aerospace and Defense Channel

The tactical and technical capabilities of a radar system are determined mainly by the technical features of the associated antenna subsystem. Aselsan has developed a family of naval surveillance radars with individually developed, cutting-edge antennas tailored to provide excellent system performance, which has been verified in various field trials. The maritime surveillance radar family consists of ALPER, the Naval Low Probability of Intercept (LPI) radar for vessels; DALYAN, the subsurface counterpart of ALPER for submarines; and SERDAR, the coastal surveillance radar for critical coastal areas, shown in Figure 1.

The first to be launched was ALPER and systems have since been delivered to the Turkish Navy. The radar has excellent Electronic Counter-Countermeasures (ECCM) and LPI characteristics with an extensive detection range and a low level of emittance. SERDAR, which started factory acceptance testing in late 2011, exhibits similar characteristics but with a larger antenna, and it also eliminates blind zones in the coastal region being covered, regardless of terrain. Table 1 shows the main features/specifications of the ALPER and SERDAR radars. DALYAN, which will go into production in 2012, is essentially ALPER’s submarine counterpart with similar radar system features. 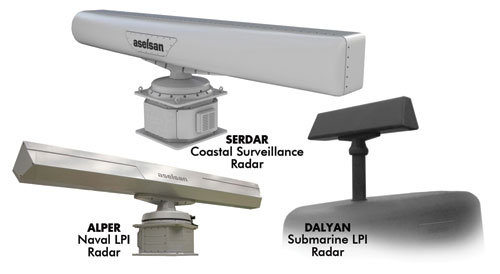 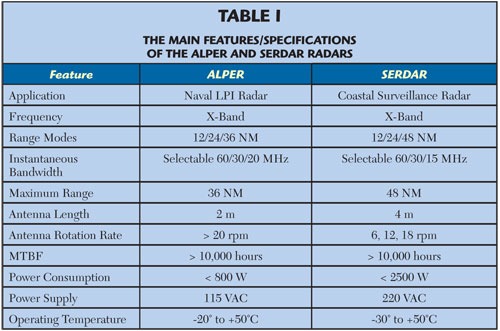 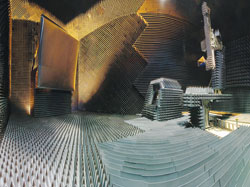 The ALPER Naval LPI radar is designed and developed for navigation, surveillance, detection and tracking of surface and low altitude air targets in the littoral sea environment. It can be utilized with navigation radar, sharing its navigation control console, and can be linked to a combat management system (CMS). The main technical features of ALPER are a digital receiver, clutter suppression and detection algorithms, digital signal processing, a solid-state transmitter with adjustable output power and an SWGA array with high angular resolution and low sidelobe levels.

DALYAN’s Line Replaceable Units are basically the same as those of ALPER, except for the antenna. DALYAN’s antenna is capable of withstanding 60 Bars of hydrostatic pressure, an essential feature for submarine radar, and it also has low RCS characteristics. A frequency selective surface radome with low insertion loss can also be employed to further reduce the RCS, without altering the antenna characteristics.

The antenna is 1 m long, employing a horizontally polarized cosec2 shaped beam tilted to the horizon with respect to the broadside of the array aperture in the elevation plane, directing maximum energy to the horizon. In order to improve the direction finding capability in the azimuth plane, a monopulse beamforming structure is employed.

SERDAR, the coastal surveillance radar that shares similar technical features with ALPER, is optimized for detection in the littoral environment. It can be directly linked to command and control (C2) systems. SERDAR’s capabilities mean that the antenna detection zone can start directly at the coast, free of any blind zones, regardless of the site geography. Whether the coast is mountainous or flat, the beam coverage can be optimized due to its adjustable beamformer.

SERDAR’s antenna is a 4 m long SWGA operating at X-Band. The antenna employs a horizontally polarized inverse cosec2 fan beam to meet angular resolution requirements and low sidelobe and cross polarization levels in 3D space across the whole operating frequency band. With the aid of an elevation beamformer, adjustable shaped beam synthesis can be achieved and antenna polarization can be factory set to circular polarization as well.