We use cookies to provide you with a better experience. By continuing to browse the site you are agreeing to our use of cookies in accordance with our Privacy Policy.
Home » A 40 to 900 MHz CMOS Broadband Differential LNA for a DTV RF Tuner
Industry News

It is known that the differential circuit can mitigate the effects of common mode noise. As shown, this LNA, which did not use a high impedance at the source terminal, is a pseudo-differential circuit structure. The reason not to use a true differential amplifier circuit is that, for low voltage RFIC design (1.8 V, for example) a high impedance at the source terminal will compress the voltage headroom and output voltage swing, which will reduce the amplifier gain. Also, this pseudo-differential LNA circuit can still reject the common mode noise from VDD.

The M1 and M2 of the dual-feedback stage dissipates 2 and 4 mA of DC current, respectively. The aspect ratios (W/L) of M1 and M2 are chosen to be the same. To ensure M1 is operating in the saturation region, the size of the diode-connected transistor, Mf1, is chosen to be twice that of M1. In addition, Cf1 is added in parallel with Mf1 to compensate the over-damped characteristic of this structure. However, the dual-feedback stage does not provide the desired gain for the LNA. In order to achieve a higher gain, a shunt-shunt feedback stage6 is added. M3 dissipates 6 mA of DC current and the shunt-shunt feedback stage dissipates 12 mA due to the differential topology.

As shown, Mc1 is used to implement a gain-control mechanism. The voltage, Vctrl, applied to Mc1, controls the variable gain. This topology yields a negative slope gain-control curve. The LNA has its maximum gain when the control voltage is zero and vice versa.

Figure 4 shows the complete circuit schematic and chip micrograph of the designed differential LNA. The chip die size is 1.007 × 0.568 mm. The circuit measurement is performed using an FR-4 PCB test fixture. For differential S-parameter measurements, a four-port network analyzer was used. Since the four-port analyzer can support differential measurement, no baluns are needed. Figure 5 shows the block diagram and photograph of the test fixture for differential measurement environment. It is noted that, although this circuit is designed for 75 Ω DTV systems, 50 Ω instruments are used for measurement. In order to match the two different characteristic impedances used in the system, matching pads (Mini-Circuit ALMP-5075) are used to convert the impedance from 50 to 75 Ω and vice versa. For single-ended instruments such as the signal generator, spectrum analyzer and noise figure analyzer, a balun (Mini-Circuit TX-2-5-1) is used to convert the differential input/output to single-ended input/output. Figure 6 shows the block diagram of the conversion scheme and a photograph of FR-4 PCB test fixture.

The simulated and measured results are shown in Figures 7 to 11, where the measurements of S21 and S12 are shown with the losses of the baluns and matching pads de-embedded. When the control voltage is zero (high gain mode), the LNA exhibits a gain of 20.26 ±0.41 dB, a noise figure less than 5 dB, an input P1dB between –19.5 and –20.3 dBm, and an IIP3 between –12.7 and –10.9 dBm from 40 to 900 MHz. When the control voltage is at 1.8 V (low gain mode), the LNA gain is –42.8 ±4.9 dB. The power consumption is 43 mW at VDD = 1.8 V. It is noted that for the S-parameters, since the measurement with 50 Ω systems and the simulation using 50 Ω loads show good agreement, it is believed that the measurements with a 75 Ω system (not provided) and the simulations will also be in good agreement. Table 1 gives a summary of the measured and simulated performance of the CMOS broadband differential LNA with gain control. 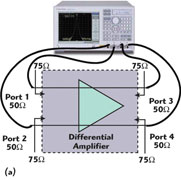 A 40 to 900 MHz CMOS broadband differential LNA with gain control, implemented in a 0.18 mm CMOS process, for a DTV RF tuner application is described. The LNA uses both a dual-feedback and shunt-shunt feedback topology to achieve a high and flat broadband response. The LNA is designed with 75 Ω differential input and output impedances. The chip die size is 1.007 × 0.568 mm. The circuit measurement is performed using an FR-4 PCB test fixture. Since typical measurement instruments are 50 Ω systems, matching pads are used in the measurement to match the impedances between 50 and 75 Ω. For single-ended measurements such as with spectrum and noise figure analyzers, a balun is used to convert the differential input/output to single-ended input/output. In the 40 to 900 MHz frequency range, the LNA exhibits a gain of 20.26 ±0.41 dB, a noise figure less than 5 dB, an input P1dB between –19.5 and –20.3 dBm, and an IIP3 between –12.7 and –10.9 dBm. The gain tuning range is from 20 to –42.8 ±4.9 dB over the 40 to 900 MHz range. The power consumption is 43 mW at VDD = 1.8 V.

The authors would like to thank the Chip Implementation Center (CIC) of the National Science Council, Taiwan, ROC, for providing the TSMC CMOS process.