We use cookies to provide you with a better experience. By continuing to browse the site you are agreeing to our use of cookies in accordance with our Privacy Policy.
×
Home » Overcoming C-V2X Compliance Challenges
IoT/M2M/V2V Channel

More than 1.3 million people are killed in auto accidents each year. The U.S. National Highway Transportation Safety Administration estimates that human error is responsible for 94 to 96 percent of these fatalities. Other estimates are even higher—as much as 98 percent. Improving automotive safety, reducing or even eliminating auto fatalities and accidents, is one of the primary motivations behind the rise of cellular vehicle-to-everything (C-V2X) communications. C-V2X is a wireless technology that promotes higher levels of autonomous operation in vehicles by enabling vehicles to communicate continuously, in real time, with other vehicles, as well as other parts of the traffic system, including roadside infrastructure, bicyclists and pedestrians.

The use of 5G C-V2X technology will multiply in the coming years as automotive manufacturers increasingly make it available in new vehicles to promote safety, efficiency, mobility and quality of life. However, incorporating C-V2X into vehicles and vehicle modules poses challenges. These challenges include RF propagation complications associated with moving vehicles, congested roadways and metal objects. C-V2X is also complicated by an abundance of standards created by different organizations and regional differences in standards, traffic safety laws and policies.

This article describes the status of C-V2X technology and its adoption, including the newest updates in the 3GPP’s Release 17. It also delves into the major challenges associated with C-V2X validation and testing, including those associated with regional variance in technology implementation and standards and offers some practical advice for navigating the pitfalls of C-V2X certification.

The roots of V2X technology date back to the 1970s with research in the U.S. and Japan. However, in 2016, the first mass-produced vehicles equipped with V2X communications began. Early V2X vehicles did not use cellular technology; instead, these vehicles in the U.S. and Japan used a WLAN-based technology called direct short-range communication (DSRC). V2X first made it into cellular standards with 3GPP Release 14 in 2017. The first commercial C-V2X chipsets, which supported LTE-based C-V2X, were introduced in 2018. In 2020, the first mass-market vehicles that incorporated C-V2X rolled off the assembly line in China.

The first 5G new radio (NR) C-V2X specifications were included in 3GPP Release 15, the initial 5G standards, which achieved ASN.1 freeze in mid-2019. Following that, 3GPP Release 16 added a significant number of enhancements supporting C-V2X, including sidelink. Sidelink enables user equipment (principally vehicles) to communicate directly without involving the network, facilitating the sharing of real-time sensor data. Sidelink is a major component of C-V2X because direct vehicle-to-vehicle and vehicle-to-infrastructure communications enable vehicles to understand real-time traffic and road conditions, access non-line-of-sight data sensing to see around corners and warn each other of driving hazards. Other significant enhancements contained in Release 16 that enable and enhance C-V2X functionality are:

Release 17, which achieved ASN.1 freeze earlier this year, built off the functionality in Release 16, including the addition of several sidelink enhancements such as network-controlled interactive service (NCIS), enhanced relays for energy efficiency and extensive coverage (REFEC) and audio-visual service production (AVPROD).

One of the major complexities that makes the design and test of C-V2X modules challenging is the intelligent transport system (ITS), a comprehensive system that aims to enhance traffic management in many countries and regions. Most countries have designated the 5.9 GHz frequency band as the official ITS frequency band. 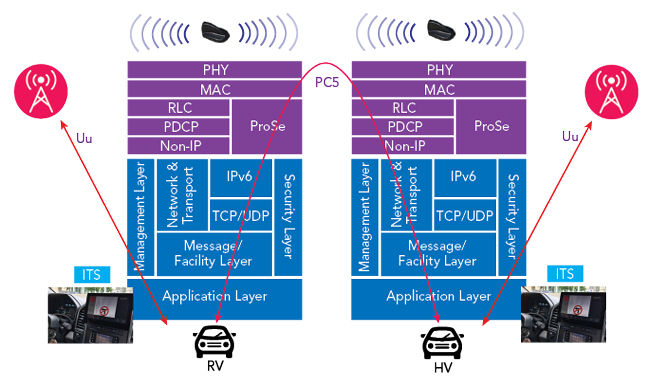 The ITS stack is comprised of several elements that sit above the physical layer (see Figure 1). The stack has been inverted to reflect the more practical arrangement. For example, the physical layer, typically connected to antennas on the rooftops of vehicles, is shown at the top of the diagram. ITS stack elements include the transport, messages and applications layers, with each layer possessing management capability and security. Although the physical layer of C-V2X is based on cellular technology and differs from other V2X systems such as DSRC, each layer in the ITS stack is adapted from standards created by many organizations, including SAE International, the European Telecommunications Standards Institute (ETSI), the Car 2 Car Communication Consortium, China Communications Standards Associations (CCSA), China Society of Automotive Engineers and others. Even though the layers of the ITS stack are based on standards and reused, the upper layers of the stack contain regional differences. The regional ITS layer differences can be attributed mainly to North America, Europe and China. Each layer performs similar functions, regardless of regional variance. The C-V2X module design must consider the different standards of each region where the product will be sold. Test equipment and test processes must reflect these differences as well, meaning different design and test tools and test methodologies may be required for every C-V2X module or vehicle being sold in multiple regions.

Figure 1 illustrates the importance of verifying that the remote vehicle (RV) can send and receive messages from the host vehicle (HV). For example, if a message such as an electronic emergency brake light warning is initiated by one vehicle, it is important to ensure this warning message goes up through the layers of the physical stack over the air and is received and decoded back through the application layer. The figure shows a logical understanding of how the message is initiated in one vehicle, travels up through the layers to the antenna, is received by the other vehicle through its antenna and is then processed and decoded back down. For C-V2X certification purposes, proper testing of this functionality requires accurately measuring this interchange and accounting for regional variance.

One of the most important attributes of C-V2X is reliability. Because passenger safety and lives are on the line, it is critical that the technology is available in all road and traffic conditions. One of the most challenging conditions for the design and testing of C-V2X modules is heavy congestion, a situation arising daily for vehicles traveling—and sometimes sitting in traffic—on the highways of the world (see Figure 2). C-V2X modules must transmit and receive messages containing critical safety information, even in environments with hundreds or thousands of cars in the same immediate area that are also relaying and receiving C-V2X messages. Because the sharing of resources on the ITS band can be a challenge, congestion control stress testing is a requirement. Conducting a congestion control stress test involves placing a device in a congested environment, such as dense traffic situations with many C-V2X modules and other ITS stations.