We use cookies to provide you with a better experience. By continuing to browse the site you are agreeing to our use of cookies in accordance with our Privacy Policy.
×
Home » The Continuing Evolution of Radar, From Rotating Dish to Digital Beamforming

The Continuing Evolution of Radar, From Rotating Dish to Digital Beamforming

Radar was a system only possible to conceptualize at the end of the 19th century, after the Scottish mathematician and scientist James Clerk Maxwell described the classical theory of electromagnetic radiation and German physicist Heinrich Rudolf Hertz first used an antenna to prove the existence of the electromagnetic waves predicted by Maxwell’s equations. But the first real radar detection was in the early 20th century by Christian Hülsmeyer, a German physicist, with the equipment he called the Telemobiloscope. At the time, the equipment could detect the presence of a target but not its distance or speed.

The first radar system that was operational occurred a few decades later, and radar techniques progressed significantly during World War II, mostly for military applications. From there, radar continuously evolved to adjust to new threats and targets in diverse environments and to counter attempts to disable detection, such as jamming or to avoid detection, by more sophisticated targets.

The first modern radars used a rotating dish and high power amplifiers based on traveling wave tube technologies. They evolved with more sophisticated use of RF principles, such as Doppler effects, to estimate the range and speed of the target. German engineer and physicist Karl Ferdinand first showed phased array transmission in one direction in 1905. By World War II, American physicist Luis Alvarez had already developed rapidly steerable phased array radars; however, rotating dishes remained the main technology for several decades. In the 1980s, phased array systems were introduced, but not widely adopted due to size and little practicality, as they required data transfer to a computer to process the data and recreate the target. Phased array techniques only became practical with advances in electronics, largely highly integrated semiconductors that enabled the solid-state arrays developed at the end of the 20th century (see Figure 1).1

Figure 1 Evolution of radar, from the rotating dish to the active phased array with digital beamforming.

ERA OF THE PHASED ARRAY

Active electronically scanned array (AESA) radar has enabled significant improvements in radar capabilities since the late 1990s, and they continue to evolve to larger and more sophisticated arrays. AESA radars use a “phased array” antenna: an array of antenna elements or radiators, each provided with a signal having a different phase shift, which creates one or more beams. The beams result from the constructive or destructive interference of the waves from each element: in-phase signals superpose and amplify in a particular direction. Designed with enough elements appropriately spaced, the beam can have a high gain main lobe in one direction and low sidelobes. By switching antenna elements or changing the relative phases among the elements, the beam can be steered to concentrate the energy in a different direction.

Modern radars resist jamming by changing the frequency of each pulse or using a chirp technique, which spreads the frequency across a wide bandwidth during a single pulse. Elevation and azimuth beams with Doppler processing of the received signals is the basis of 3D radar, where the location of an object and its speed are determined with a more accurate identification of the object—differentiating a bird from a drone, for example.

AESAs use three beamforming techniques to create and manage multiple antenna beams: analog, digital or hybrid. The best approach depends on the tradeoffs to accomplish the system’s mission. Today, the most popular architecture for advanced radar is a combination of analog and digital beamforming.2 These hybrid architectures employ distributed mixed-signal converter nodes feeding RF beamforming subarrays. The trend is toward more mixed-signal nodes feeding smaller RF subarrays, as RF sampling moves toward the individual elements. 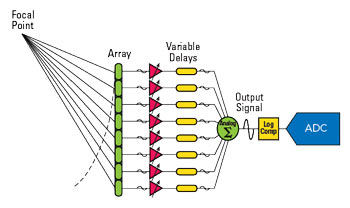 At higher frequencies and wider bandwidth, data throughput requires increased processing by the baseband processors, which increases power consumption. To mitigate this, the system can compromise converter performance by choosing lower bit resolution and power dissipation. However, this often yields undesirable signal quality, system performance and flexibility. So the tradeoff between digital processing bandwidth and acceptable cost and power will pace the adoption of wideband digital beamforming (DBF) at every element. However, large investments in semiconductor technology to improve data converter bandwidth and power efficiency will ultimately make wideband DBF at every element possible.

Radar performance improved dramatically with the transition from mechanical to AESA, and comparable improvements in performance will occur with the move from analog-to-digital beamforming as future systems become fully digital. With more converter channels located closer to the array elements, array gain improves the signal-to-noise ratio, although front-end adaptive RF signal conditioning is required to preserve the dynamic range in “blocker” environments. DBF enables flexibility: adjustments to a mission and supporting different missions, configured with system software. This multi-mission capability will enable system size and weight to be tailored for space-constrained systems, such as airborne.

Most current radar architectures in service today rely on analog beamforming (see Figure 2). The traditional analog approach uses analog phase shifters to make fine adjustments for beam steering, realized with circuits that are practical and relatively inexpensive. The analog signal chains from the antenna elements are combined and converted to digital for processing. With larger arrays, the elements are usually grouped into subarrays, with multiple analog-to-digital converters in the system. These subarrays currently provide the most practical implementation on the path to DBF: a hybrid architecture that significantly reduces the number of digital channels, associated data processing and power consumption. 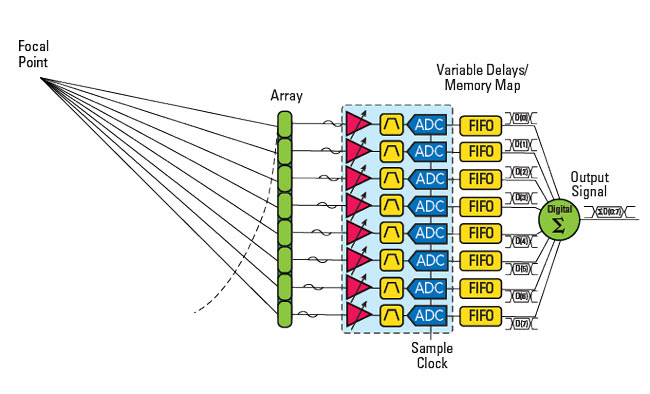 As noted, the architecture offering the most flexibility and best performance, albeit with challenges, is full elemental DBF. With this architecture, a data converter processes the data from each element’s front-end module (see Figure 3), eliminating the analog beamforming layer. With DBF, many beams can be simultaneously formed and steered, the number limited only by digital signal processing (DSP) capacity. This architecture brings flexibility and arguably better reliability, with the attendant challenges from the amount of digital data to be processed, synchronizing multiple channels and minimizing the size, weight, power and cost (SWAP-C) of the array (see Table 1).3 Reviewing the benefits of DBF shown in the table:

Hardware implementation and associated SWAP-C are increasingly challenging. The hardware cost, power consumption and thermal dissipation increase because signal processing is required at each element. The element spacing—a half wavelength or less to avoid grating lobes in the array—shrinks at higher frequencies, posing size constraints as each signal chain must fit within the area allotted to the element. The array thermal design must comprehend the added electronics at each element and the spacing constraints.