We use cookies to provide you with a better experience. By continuing to browse the site you are agreeing to our use of cookies in accordance with our Privacy Policy.
×
Home » LEO Constellations: The New Military Frontier
Aerospace and Defense Channel

Satellite applications for government and military range from ultra-secure communications to tracking and early warning of ballistic and hypersonic missiles. As space becomes a more highly contested arena, satellites will play an increasingly crucial role in maintaining superiority.

Military and government organizations are increasingly eying LEO satellites for military applications. In the U.S., for example, the president requested a $24.5 billion budget for the U.S. Space Force and Space Development Agency for fiscal year 2023. However, the viability of LEOs for aerospace and defense will depend on performance assurance throughout development, launch and the mission. This task has two challenges: proving capabilities for military applications and verifying performance at higher frequencies and wider bandwidths.

Like the commercial world, aerospace and defense agencies are generating and consuming more data. With global reach, they need to transmit and receive information through satellite networks, both for communication and data transfer. A distributed LEO constellation spreads the reliability risk and cost across hundreds or thousands of satellites; however, this brings security risks for the hardware as it passes over unfriendly territories. National security needs require cyber protection and novel operation to protect this infrastructure when deployed in space. 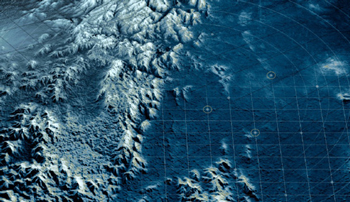 Figure 1 As each LEO satellite has a limited field of view, multiple satellites are needed to continuously cover the surface of the Earth.

In addition to ensuring security, LEOs must maintain exacting performance despite challenges from weather, the environment—even motion. LEO satellites move at some 17,000 mph as they orbit the Earth. Though such constellations have many advantages for low latency communications, Doppler shift and fading must be accommodated in the link design. Unlike satellites in GEO, LEO satellites have a limited field of view because of their lower altitude and speed (see Figure 1). More satellites are needed to provide coverage of the globe and any given region.

Communicating with a LEO constellation requires the ground terminals to switch among satellites and antenna beams to maintain uninterrupted communication. Because of the speed of the satellites, coordination between terminals and the individual satellites must occur automatically. The terminal must track one satellite, then a second as the first satellite goes out of view, and the connection must seamlessly switch between the two. Phased array antennas perform this task well, able to track multiple LEO satellites simultaneously, so no connectivity is lost. A phased array comprises many antennas in a matrix—each antenna element phase shifted so the radiated waves add constructively or destructively—maximizing gain in desired directions, minimizing in undesired directions. Phased arrays provide features and characteristics not achievable with a single antenna.

Spectrum crowding is another challenge for LEOs. Limited availability in reserved satellite bands and requirements for wider bandwidth in satellite links have increasingly pushed deployment to higher frequencies, including for aerospace and defense applications. This demand for data rates is driving satellites to use more complex modulation, as well. However, wider bandwidth and higher-order modulation can limit link quality at mmWave frequencies.

The viability of LEOs for aerospace and defense applications depends on assuring performance throughout the mission. This requires proving the system has the capabilities for military applications and verifying the performance at the operating frequency and bandwidth. To achieve higher data rates, wireless communication systems typically increase signal bandwidth and use higher-order modulation, increasingly using mmWave frequencies because of the available wider bandwidth. However, wide bandwidth, higher-order modulation and mmWave frequencies pose challenges: 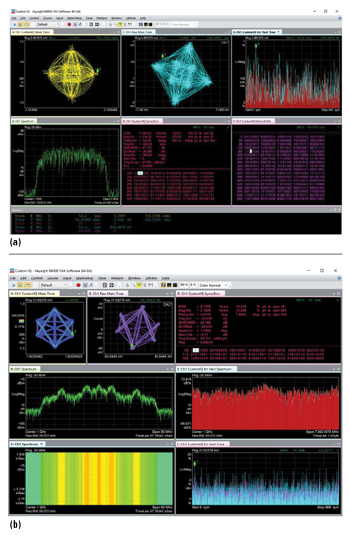 Link budget: As the operating frequency increases, so does the path loss between the transmitter and receiver. To achieve adequate signal-to-noise in the link, the transmit power and noise figure of the receiver must be designed to match available component technologies for the distance. Fortunately, LEO constellations have less path loss than GEO satellites, and advances in cost-effective phased array architectures enable targeted spot beams that increase gain and the effective radiated power.

Noise: Wideband systems have more noise power and are more susceptible to spurious signals within the band. The receiver must be designed to have sufficiently low spurs and a low noise floor to achieve the required spur-free dynamic range and error vector magnitude with the chosen modulation.

Test complexity: High frequency, wide bandwidth signals can be difficult to test, requiring the most capable test systems. The signal generator that drives the device under test and the signal analyzer that processes the output signal must cover the appropriate frequency band and have sufficient instantaneous bandwidth, output power, noise figure and linearity—with margin. For example, characterizing power amplifiers with digital predistortion requires linear power and wide measurement bandwidth.

The LEO system may use proprietary modulation—unique geometric forms, even asymmetric—which the signal generator must be able to synthesize and the analyzer demodulate (see Figure 2). The test system should be flexible, able to accommodate differing modulation and channel bandwidths of multiple satellite systems. Also, it should be easy to configure, minimizing the time to generate and analyze complex signals. For the user, developing and maintaining synchronization, signal quality and hardware connectivity algorithms can be time-consuming; the equipment should ease this burden. 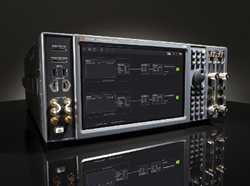 To support the rapid development of LEO satellite systems for commercial, government and military applications, test systems for wideband signal transmission through dynamic channels must offer users the ability to characterize future systems: new frequencies, bandwidths, signals and technologies. As system complexity grows, the test system should not limit or slow development.

Fortunately, continuously improving processors, mmWave components and software are enabling test, measurement and calibration systems to meet the needs of these LEO satellite constellations, whether in development or not yet defined. The current generation of signal analyzers provides coverage to 54 GHz with 2.5 GHz of instantaneous bandwidth, 5 GHz with channel bonding (see Figure 3). Adding high performance up-converters extends the frequency range to 110 GHz with low phase noise.

Ease of use is also a priority. For example, for multitone group delay tests, current systems enable the user to set everything up on the analyzer; the analyzer sends the appropriate configuration to the source, i.e., tone frequencies and spacing, bandwidth and power. An easy setup using a single graphical interface controls both instruments, which ensures no mismatch between the source and analyzer.

LEO satellite systems have introduced new design and test challenges: higher frequencies, wider bandwidths and system complexity. A microwave signal generator with signal generation software can accelerate system design, optimization and validation, keeping pace with compressed development times to launch. The signal generators and analyzers must provide signal purity, linear output power and low noise to support the goal of mission assurance. Once a satellite is launched and deployed, it can’t be returned to Earth to fix. The test systems must assure accurate, repeatable and traceable results.

Not Your Parents’ 5G: New Use Cases for Military and Government