We use cookies to provide you with a better experience. By continuing to browse the site you are agreeing to our use of cookies in accordance with our Privacy Policy.
×
Home » Online Spotlight: Ceramic Antenna Magic – When the PCB Ground Plane is Your Antenna
Aerospace and Defense Channel

Online Spotlight: Ceramic Antenna Magic – When the PCB Ground Plane is Your Antenna

Small ceramic antennas have become popular as they occupy less board space than traditional printed circuit board (PCB) antennas; however, the small package of these ceramic devices is only one part of the antenna. It radiates by interacting with a much larger PCB ground. Only if these pieces are properly co-designed, with a sufficiently large PCB ground, do we obtain the expected antenna performance.

Inexperienced designers often misinterpret the small ceramic antenna package and place it very differently from the manufacturer’s prototype design, on a much smaller PCB. This results in antennas with impedances that are difficult to match and have poor radiation efficiency. This article discusses the importance of antenna placement and PCB dimensions.

Many small "chip" antennas are designed as shorted monopoles, with miniaturized meanders or helixes on dielectric cores. These 1-port devices are typically placed on the corners of PCBs, that are completely cleared of any metal grounds. The short monopoles are then matched to 50 Ω using discrete LC matching.

In contrast, the antenna investigated here is a two-port device that must be complemented by a PCB conductor loop around a clearly defined cutout. The antenna is part of the loop and current flows around the cutout. This excitation is then radiated by the PCB metal backplane.

The device under test considered here is a Pulse Larsen W3011 Global Navigation Satellite System (GNSS) antenna operating at 1575 MHz. The author of this article is not affiliated with the antenna manufacturer and only came across that device during simulation support for a client who had unsuccessfully tried it on a very small PCB, despite warnings in the data sheet. To better understand this antenna type and its layout requirements, EM simulations are used for parametric studies and field visualizations.

The W3011 ceramic device has two terminals and can be understood as a capacitor, so that by adding a PCB cutout with inductance from path length, a resonant structure is created in the cutout region (see Figure 1). With proper placement of that current loop on the edge of a large PCB, good radiation performance can be achieved. The PCB ground plane is required to guide the radiation and efficiently couple the loop to free space. The antenna is functional only if all these ingredients are combined properly. 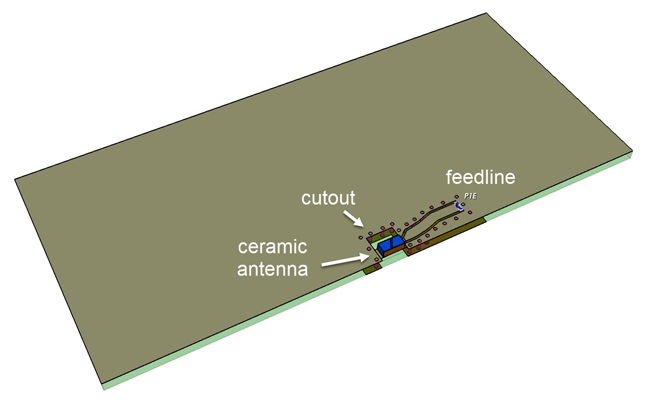 Figure 1 Ceramic antenna and cutout centered on the edge of a PCB ground plane.

To avoid any misunderstanding, it must be noted that this antenna concept does not use PCB material as a dielectric resonator. Performance is unchanged if the PCB top and bottom planes are connected by fences (vias), shorting the electric field inside the PCB dielectric. It is the PCB metal plane that interacts with slot excitation and guides the waves.

Although there is a current loop operating at resonance, the antenna is not a simple "magnetic loop" antenna either, which has a radiation pattern zero perpendicular to the loop. There is a more complex interaction between the resonant currents in the slot region and the metal plane. As seen later, the pattern looks more like a dipole on the long axis of the PCB, with the resonator slot in the center.

To study antenna behavior with different PCB shapes and dimensions, the antenna device plus PCB is modeled in a 3D EM simulation. To establish a trusted baseline model, dimensions and metalization are obtained from the data sheet, leaving the ceramic material properties as the only unknown. Carefully replicating the reference PCB from the data sheet, a permittivity of 87.3 is obtained by fitting the simulated and measured resonant frequency. The ceramic loss tangent is set to zero in this model because conductor loss is dominant in this resonator.

Impedance, bandwidth and antenna patterns are compared with measurement from the data sheet and found to be in good agreement. With trust in the model established for the reference layout (baseline simulation), parametric studies are conducted.

The resonant frequency is determined by the device capacitance between the two terminals and inductance formed by the path length around the cutout. This resonator coupled to the input port masks possible resonances caused by the PCB size.

It might seem unusual to explain and treat the ceramic "antenna device" as a capacitor, but it is about generating a resonance around the slot, and the ceramic device provides the required capacitance between the two terminals to resonate with inductance from the path length around the cutout. Figure 2 shows the resulting current density in the slot region at resonance. The surrounding PCB metal is excited by this resonance, guides the signal and couples it to free space. Figure 3 shows the electric field around the 80 x 37 mm PCB at resonance. 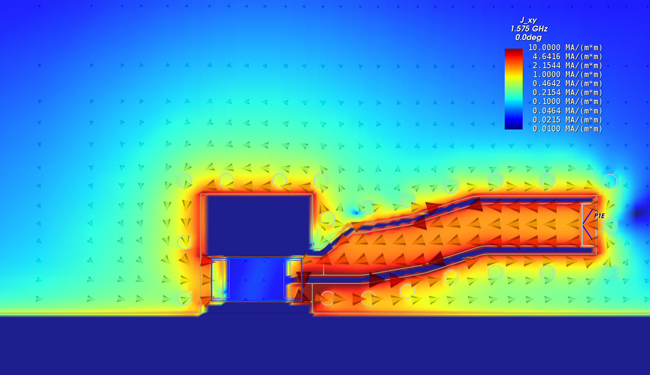 Figure 2 Current density in the cutout region at resonance on top of the metal layer. 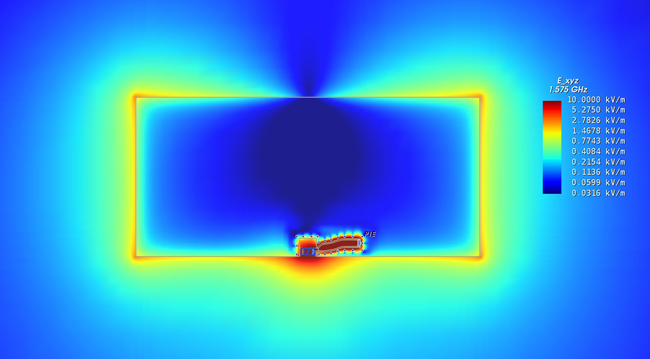 Figure 3 Electric field at resonance halfway between the top and bottom layer.

To set the resonant frequency for the given ceramic device, the path length around the cutout must be adjusted to change effective inductance. Figure 4 shows the shift in antenna resonance when the nominal 4.25 mm cutout length is adjusted by +/– 0.5 mm, with constant cutout with of 4 mm. 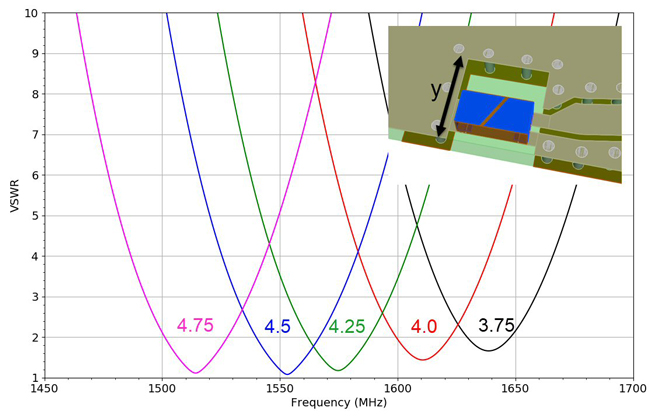