We use cookies to provide you with a better experience. By continuing to browse the site you are agreeing to our use of cookies in accordance with our Privacy Policy.
×
Home » New Features for RF/Microwave Engineers in Comsol Version 6.0
Industry News Software/EDA Channel There are some excellent updates for COMSOL Multiphysics® version 6.0. The overall emphasis in these updates was the Democratization of Simulation. It allows everyone to utilize the tools and provide feedback through the entire process of developing a model to feedback directly from production.

Version 6.0 introduces the Model Manager, the Uncertainty Quantification Module, faster solvers for heat radiation and nonlinear structural materials, new powerful tools for electromagnetics analysis of PCBs, and flow-induced noise. The Model Manager provides functionality allowing colleagues to collaborate and centrally organize models and apps, including access and version control as well as advanced search. The Uncertainty Quantification Module is used for understanding the impact of model uncertainty — how quantities of interest depend on variations in the inputs of a model.

Here is a close look at the RF Module Updates: 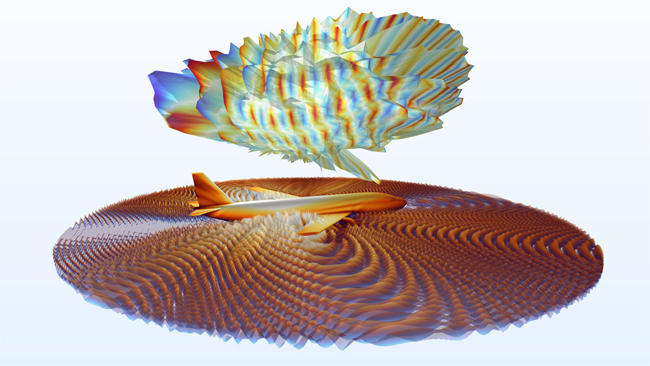 FEM–BEM Coupling of an 850 MHz Wi-Fi antenna placed of the airplane fuselage: the far-field radiation pattern, surface current density on the airplane, and surface plot of the z-component of an electric field on a 3D grid dataset are visualized.

A new Frequency Domain, RF Adaptive Mesh study makes the workflow much easier when setting up mesh adaptation for modeling microwave and millimeter-wave antennas and circuits. This dedicated study step automatically provides the solver settings needed. For efficiency reasons, linear element discretization is used in the adaptive process. In a next step, a frequency sweep is typically used to characterize the device under test. For this subsequent step, linear elements or higher-order elements can be used.

Strong electric fields tend to be confined around the edges of conductive boundaries. A finer mesh around these edges may help a simulation accurately analyze the resonance behavior of a device in the frequency domain. When using a physics-controlled mesh, a new Refine Conductive Edges option quickly identifies the exterior edges of signal path boundaries configured by perfect electric conductors or transition boundary conditions and applies the user-specified mesh size. This technique can be used as an alternative to adaptive meshing. You can see this new option in the existing Coplanar Waveguide Bandpass Filter tutorial model as well as two new tutorial models, Modeling of a CPW Using Numeric TEM Ports and Modeling of a Grounded CPW Using Numeric TEM Ports.

The mesh on the edges of microstrip lines in the branch-line coupler is refined by the size relative to the default maximum mesh size.

A new Constitutive relation option, B-H curve, has been added to model nonlinear magnetic phenomena. The material properties from the Nonlinear Magnetic Material Library, available with the RF Module, can be used to relate magnetic field and magnetic flux density. The B-H curve data from the material library are provided as interpolation functions for the magnetization curve without hysteresis effects. The effect of electrostatic discharge on a ferrite device can be studied to identify undesirable RF noise generation.

If no geometrical feature sizes are smaller than half a wavelength and the operating frequency is high, modeling with a higher-order element, such as cubic element discretization, is beneficial for faster computation. The computation efficiency can be further improved by selecting the Shifted Laplace contribution on multigrid levels check box under the Multigrid study settings.

Typical periodic problems are solved with a direct solver. However, the direct solver consumes a lot of memory when the periodic unit cell size is not subwavelength. In this case, switch to the Suggested Iterative Solver to finish the computation faster with less memory usage. 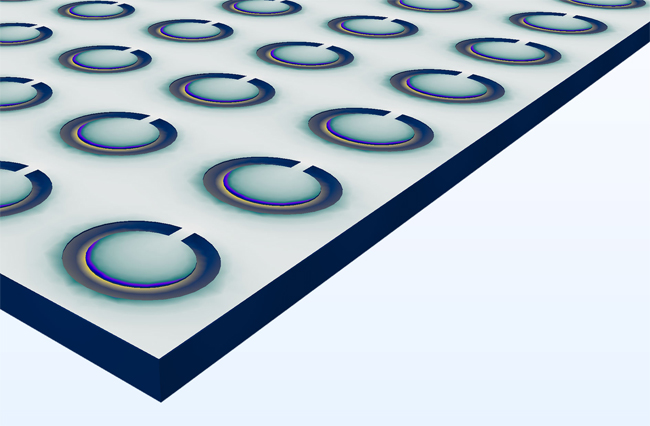 Multiple thin layers such as gold-plated copper of circuit board trace or close to normal incidence on an antireflection coating to an optical lens, can be described by the new Layered Transition Boundary Condition feature. It requires combining this boundary condition with the Layered Material feature in the global Materials, and Layered Material Link feature in the component Materials node. You can see this new feature demonstrated in the Rat-Race Coupler tutorial model. 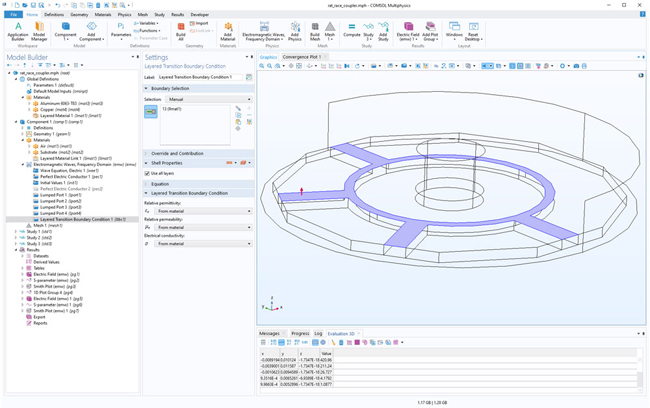 A new Symmetry Axis Reference Point feature helps to define Gaussian beam input fields in 2D axisymmetry. In the Scattering Boundary Condition or Matched Boundary Condition nodes, this is added as a default subnode when an incident field is defined. The Symmetry Axis Reference Point feature defines a reference position at the intersection point between the parent node's boundary selection and the symmetry axis.

The Symmetry Axis Reference is a subnode to the Scattering Boundary Condition. In the Graphics window, the reference point is indicated as a blue point on the symmetry axis r = 0.

To simplify the inspection of the port mode fields, they are now automatically created when Numeric port types are used. You can see this default plot in the Modeling of a CPW Using Numeric TEM Ports and Waveguide Adapter tutorial models.

When exciting all ports, as in a phased antenna array, it is possible to compute the reflection coefficient at each excited port that includes the impedance mismatching as well as coupling by adjacent active ports.

COMSOL Multiphysics® version 6.0 brings several new and updated tutorial models to the RF Module. All of the updates make this version more powerful, efficient and capable.