We use cookies to provide you with a better experience. By continuing to browse the site you are agreeing to our use of cookies in accordance with our Privacy Policy.
Home » Conformal Subsections for Accurate EM Analysis
Industry News Test and Measurement Channel

One of the hidden difficulties is that current naturally flows strongest on the edge of any planar conductor. This is called the edge effect. The edge effect must be included for an accurate analysis. Normally, the edge effect is included by using narrow subsections along conductor edges. However, the number of subsections quickly becomes too large for curving edges, even if arbitrary rectangles and triangles are used.

Conformal meshing solves this problem by automatically assigning more current to cells at the edge. Now a few large subsections can be used to follow curving transmission lines rather than the previously required multitudes of tiny rectangles and triangles, and high accuracy is maintained because the edge effect is still included.

Figure 3 shows a spiral inductor on silicon3 (vertical axis expanded). It uses a two-layer model for the thick conductors.4 Figure 4 shows the measured versus calculated S-parameters, using an independently determined dielectric layer stack-up exactly as provided by Motorola. No attempt was made to tune the geometry. Analysis time on a 3 GHz class P4 computer is 5 min 48 sec per frequency with analysis at only six frequencies needed to provide a complete spectrally rich data set from 0.1 to 10 GHz. The conformal subsections are all about one-half spiral turn long.

Without conformal mesh, analysis of this spiral, including edge effect and thickness, requires one week or more for even the fastest of EM tools. Conformal mesh is an enabling technology.

Figure 5 shows the current distribution on the bottom side of the spiral's thick metal. Especially intriguing is the edge effect current. Notice that it starts out with high (red) current on both edges of the spiral line. Following the spiral, the current switches sides every several turns. Edge effect current flowing on only one side of a line nearly doubles metal loss. To increase inductor Q, one can consider splitting the line into two narrow lines periodically. Then the two lines can swap sides periodically (using air bridges), forcing edge effect current to remain evenly split. Such alternatives can be quickly evaluated using conformal mesh.

Figure 6 shows the same inductor (vertical axis extremely expanded) analyzed with a much smaller cell size. Each cell in Figure 5 has now been converted into 16 exceptionally tiny cells. The S-parameters are almost exactly the same, so this analysis actually represents a grievous waste of numerical resources; however, it does illustrate the immense power of conformal meshing. Being able to analyze the spiral meshed as finely as this means 16 spirals meshed as in Figure 5 can be simultaneously analyzed all in one single (lengthy) analysis. The spiral of Figure 6 consists of 1.7 million conformal mesh cells, perhaps the largest circuit ever analyzed by a non-iterative MoM EM analysis. 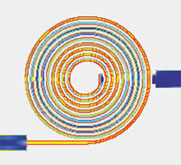 Conformal mesh, by generating large subsections which follow smoothly curving lines and including the edge effect, now allows the accuracy and speed of FFT-based EM analysis to be realized for curving non-Manhattan circuits. This marks a huge increase in the range of circuits that can be accurately analyzed, an appropriate culmination of 10 years of intense research.

Sonnet® is a registered trademark of Sonnet Software Inc.

The Growing Importance of Oscillators With 5G