We use cookies to provide you with a better experience. By continuing to browse the site you are agreeing to our use of cookies in accordance with our Privacy Policy.
×
Home » Contactless Waveguide Flange Enables Faster Measurements

Applications continue to expand for mmWave and THz frequencies in aerospace, military, industrial and consumer markets. The result is increasing demand for faster and more reliable methods of testing waveguide components. At these frequencies, a rectangular waveguide is commonly used to carry the signals between components and subassemblies, with standard and non-standard flanges as the predominant means for connecting waveguide sections. When joined, precisely machined flanges provide continuous electrical contact around the mated waveguide openings.

Inadvertent gaps and surface damage may be minimized by carefully and evenly tightening the screws that provide mechanical contact between the waveguide flanges. However, this requires substantial training and skill to be performed correctly. When done repeatedly in a production environment, this work requires endurance and discipline. Ultimately, using traditional waveguide flanges in manufacturing operations limits how quickly and reliably components can be tested and sorted.

This article describes a contactless waveguide flange (CWF) that can be used without the flange screws mandatory with conventional flanges. When used with streamlined test fixtures, the CWF enables much faster mmWave and THz measurements while maintaining accuracy and reliability. The CWF was developed to preserve the electrical and mechanical integrity of both the device under test (DUT) and the test system, without sacrificing measurement results.

The CWF employs gap waveguide technology while applying the well-known principle of operation of the choke flange. The CWF choke is a recessed ring engraved into the flange at a nominal depth of λg/4 and a distance λg/4 from the waveguide walls, where λg is the guide wavelength. Gap waveguide technology has been thoroughly investigated and used previously in the design of antenna array feed structures and other passive components.3 These studies demonstrate that when a perfect magnetic conductor (PMC) plate and a perfect electric conductor (PEC) plate are positioned so they are parallel to each other and the distance between them is less than λ0/4, where λ0 is the wavelength of the operating frequency in air, a cutoff condition is created. As a result, parallel plate transmission modes cannot propagate between the plates.

Further, textured surfaces formed by metallic pins attached to a ground plane can exhibit the electrical characteristics of a PMC, forming an artificial magnetic conductor (AMC) over a limited range of frequencies. Often referred to as a “bed of nails substrate,” such an arrangement can be used to suppress dielectric surface waves in planar antenna structures. In the CWF, the choke ring is populated with concentric rings of small, pin-like structures to realize a high impedance AMC surface that approximates a PMC plate. Conversely, the mating surface on a conventional flange is flat, approximating a PEC plate.

The combination of a choke ring that controls the gap impedance and a band gap structure that suppresses signal leakage results in good signal transmission between the CWF and a conventional flange. In contrast to traditional flanges, no physical contact is required. Fast measurements can be performed without engaging the traditional waveguide connection screws that must be carefully tightened. 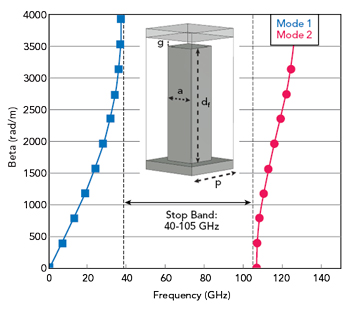 Unlike previous designs, this design combines the functions of a choke flange with gap waveguide technology to suppress signal leakage and minimize reflections.6-11 The two rows of pins form a circular pattern to ease the mechanical design and fabrication of the pins. The pins form an AMC surface that creates a parallel plate cutoff condition at the junction between the waveguide flange surfaces, reducing signal loss and reflection. The present E-Band gap adapter design has a fixed air gap of 3 mils, although smaller gaps can be used to achieve better performance.

The CWF design was refined by performing repeated simulation and iteration. The process involves trade-offs between the electrical performance and manufacturability. In the present design, |S11| was evaluated for different gaps between the waveguide flanges (see Figure 3). From 60 to 90 GHz, the simulated return loss is better than -30 dB for a 3 mil gap and -40 dB for a 1 mil gap, indicating that good electrical performance is achievable without requiring any physical contact between the flanges.

The rim surrounding the waveguide opening has the same height as the pins. Its short walls are 14 mils thick, while its long walls are nominally 45 mils thick across the longer dimension of the waveguide opening. Another rim with radial thickness of 47 mils surrounds the pin array that forms the AMC surface. This external rim protects the pin surfaces from damage and determines the minimum gap between the AMC and PEC surfaces (see Figure 4). Guide pins are included to ensure proper alignment between the CWF and the conventional flange, adhering to standard flange definitions. By eliminating screws, measurements can be performed considerably faster, since the flanges only need to be aligned and pushed together. 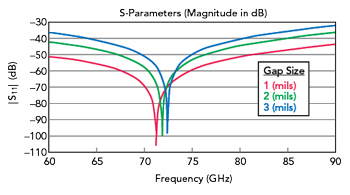 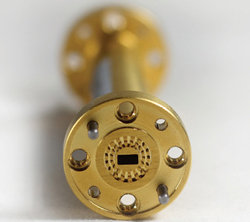 Figure 4 To prevent damage to the pin surfaces, the front face of the CWF has an outer rim 3 mils thicker than the pin array.