We use cookies to provide you with a better experience. By continuing to browse the site you are agreeing to our use of cookies in accordance with our Privacy Policy.
Home » Adapting Counter-UAV Systems to the Environment
Aerospace and Defense Channel

Adapting Counter-UAV Systems to the Environment

Unmanned aerial vehicles (UAV) or drones are now integral to our lives. They provide filmmakers with spectacular images and deliver urgently needed medicines to remote areas. Yet, when misused, they can cause damage in the millions. This has driven the demand for highly effective and reliable drone defense systems. These popular unmanned aircraft cost a few hundred euros in online shops, hardware stores and toy stores and, in just a few years, have become a serious hazard worldwide. While there are strict limitations on the commercial use of unmanned aerial systems or drones, it does not stop amateur video makers, curious spectators, industrial spies and other electronic-savvy criminals. A drone can critically disrupt air traffic. In U.S. airspace alone, the Federal Aviation Administration receives more than 100 reports of drone incidents each month. Mountain rescue helicopter flights have been canceled due to quadcopters zooming around in the vicinity. A drone filmed a car manufacturer’s latest model during a secret drive for a commercial. Rugged homemade aerial devices have delivered drugs and weapons inside prisons and have even been used as remotely controlled weapons.

Protective measures against drones can only be taken after the drone is detected. To effectively counter the threat, early warning is critical. Most commercial counter unmanned aerial vehicle (CUAV) systems can block the radio link between the remote control transmitter and the drone receiver to prevent the aerial vehicle from penetrating a no-fly zone; to do so, they must disable the radio communication. As the ISM bands are full of signals, the challenge is finding the right one. Enhanced CUAV technology can detect commercial drone activity and automatically classify the type of drone signal. It can determine the direction of the drone, its pilot and, on command, disrupt the radio control link to prevent the drone from reaching its target.

Most commercial drones are controlled with an uplink signal from the remote control to the drone using frequency hopping spread spectrum (FHSS). Another family of drones uses the WLAN standard for control. Signals transmitted to the ground from the drones (i.e., the downlink) are typically FHSS, wideband or WLAN signals. To detect the drone’s radiocommunications (RC) signals, highly sensitive antennas and monitoring receivers are needed. Under ideal conditions - Fresnel-free zone, low noise environment and CE-conforming transmitters - commercial off-the-shelf RCs can be detected up to 7 km and 5 km for drones such as the DJI Phantom 4.

Some CUAV systems use radars sensors for detection; these require line-of-sight (LOS) to the drone. Other sensors, such as acoustic, are limited by range and environmental factors. Monitoring the RC links is the only method which enables a drone to be detected the moment it is switched on. RC activity can be recognized even before a drone takes off, as drones require preflight checks. During this time, the RC is active and can be detected. With this early warning, CUAV systems using RC monitoring provide a key advantage to any multi-sensor CUAV system - more time to react. Also, determining the drone pilot’s location from the RC signal enables security personnel to deploy quickly, with a greater chance of finding and apprehending the pilot. 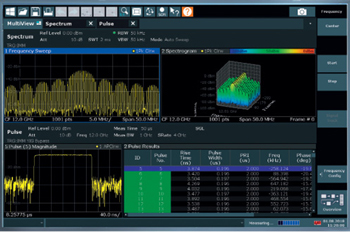 Because of a drone’s small size, low altitude and slow speed, reliably detecting it is a challenge for radar. Radar sensors must quickly scan large volumes with great sensitivity, eliminate nuisance alarms such as birds and reliably discriminate UAVs from ground targets (see Figure 1). When designing a drone detection radar, the key design considerations are:

To detect FHSS-controlled drones using their RC signals, the CUAV system should compare measured signals with a library of drone profiles. With automatic online hopper analysis, the system can identify signal parameters such as hop length, symbol rate and modulation type, which enables classifying the drone. With this, the CUAV system can force the drone to safely fail by disrupting the control signal with a “smart,” adaptive, low-power countermeasure. A wideband smart exciter can selectively jam only the detected FHSS signals and disrupt the drone’s uplink. With WLAN-controlled drones, an RC-based CUAV system using sectorial WLAN antennas for directional information can disrupt the WLAN link between the remote control and the drone.

Other CUAV solutions use a barrage jammer, which spreads power over the complete frequency band. This requires high output power and disrupts all active transmissions in the frequency band, not only the control signal for the drone. 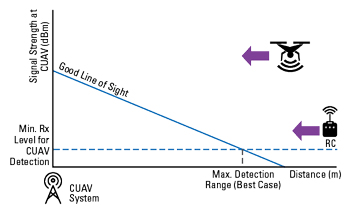 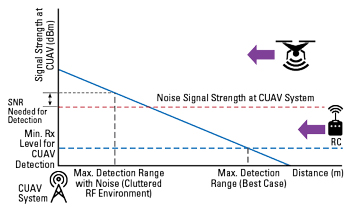 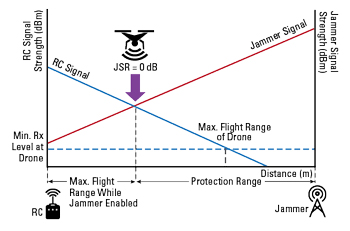 For drone detection, the received RC signal strength at the CUAV receiver must be equal to or greater than the receiver (Rx) sensitivity or minimum signal-to-noise ratio (SNR), i.e., the minimum level for drone detection. The SNR depends on the actual RF environment and changes continuously. A cluttered RF environment, for example, will reduce the detection range. To classify the drone type, a minimum Rx level must be received by the CUAV receiver. This minimum level is specific to the type of drone and depends on the FHSS modulation of the RC signal and the overall noise perceived by the detector. Figure 2 illustrates the maximum detection range in an environment with minimal noise. In an electromagnetically noisy environment such as a city, the detection range is substantially reduced (see Figure 3).

A drone is controllable when the RC signal strength at the drone receiver is greater than the minimum Rx level. If a jamming signal is also present and greater than the RC signal power at the drone - when the jamming-to-signal ratio (JSR) is ≥ 0 dB - the drone is typically no longer controllable by the pilot, although this depends on the coding scheme of the remote control (see Figure 4). The greater the JSR, the higher the probability the CUAV can disable the drone. 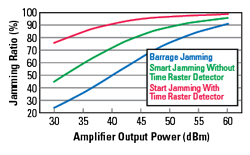 Figure 5 illustrates a jamming test using a CE-compliant remote-controlled drone with the uplink in the 2.4 GHz band. The jammer uses a power amplifier connected to a Rohde & Schwarz UHF omnidirectional antenna with a 10 m cable. Three types of jamming signals were evaluated: barrage jamming, smart jamming without a time raster detector and smart jamming with a time raster detector. The plot shows the jamming ratio versus amplifier output power for the three scenarios, showing smart jamming is more effective than barrage jamming.

Marketing the effectiveness of their systems, CUAV manufacturers often claim long ranges and precise jamming distances; however, these figures are not precise. The jamming range will depend on the ratio of the jammer signal strength to the RC uplink signal strength at the drone, i.e., the JSR. Under realistic conditions, field trials have repeatedly shown the range claims of CUAV system suppliers are often not verifiable. Ironically, the performance of systems claiming relatively short ranges, such as 2 km, is often similar to systems claiming longer ranges, such as 15 km. What is a realistic detection range? In some scenarios, systems will achieve very long detection ranges, which are usually the values shown in the technical specifications of CUAV systems. Yet these “best case” circumstances do not represent the performance in typical rural or urban deployments. Environmental conditions, such as RF noise or the relative permittivity of the ground influence detection and jamming ranges. The environment changes constantly, and the measured detection and jamming ranges will often vary with every measurement.

To achieve exceptionally long detection ranges, the Rx antenna of the CUAV system should be elevated, and the terrain between the CUAV Rx antenna and the RC Tx antenna should have low relative permittivity, such as a freshwater lake at 0°C water temperature. The first, second and third Fresnel zones should be free of obstacles, and the RF environment should have low noise - thermal and from other transmitters. The RC signal frequency should be in a low frequency band, the signal should have high output power and the antenna cables should be short. Choosing antennas with higher directionality will increase the antenna gain.

As CUAV systems depend on the application environment, they must be adapted to each scenario to achieve the optimum detection and jamming ranges. The distance ranges published by manufacturers only gives an indication of how to optimize the CUAV system for the application.

Under optimized conditions, the R&S ARDRONIS CUAV system can detect an RC signal out to 7 km. Detection ranges measured in urban or rural environments are shorter because of lower SNR, non-optimized antenna sites and other factors. Table 1 shows several environments and the typical ranges the ARDRONIS system can detect a CE-compliant RC output signal at 2.4 GHz, comparing urban, rural and low noise environments with LOS and non-LOS between the drone and CUAV. The R&S ARDRONIS system uses a wideband smart exciter for jamming remote-controlled transmission, using a FHSS signal matching the signal of the detected type of drone. Its jamming range will depend on the output power of the remote control and the detection range of the system (see Table 2). 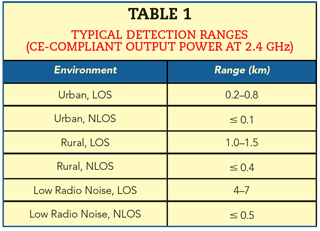 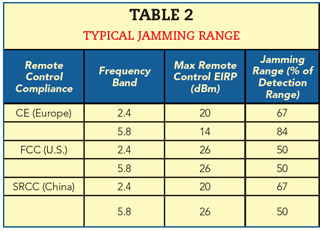 Determining what detection and jamming ranges are acceptable for a specific application depends on the following considerations: