We use cookies to provide you with a better experience. By continuing to browse the site you are agreeing to our use of cookies in accordance with our Privacy Policy.
×
Home » HFSS Software for Next-generation Design
Industry News Test and Measurement Channel

HFSS v9's new design environment empowers next-generation design by improving design for manufacturability, electromagnetic-circuit co-simulation and simulation tool design flow. HFSS v9 enhances design for manufacturability because all solid models drawn in the program are inherently parametric. Designs such as the displayed comparator are first broken down into individual components. Parameterizing these components at a geometric or material property level enables the tightly integrated capabilities of parametric sweeps, optimization and statistical design. This comparator's individual components, such as tapers, tees and entire signal paths, are parameterized and tuned for optimal performance within HFSS. These junctions and signal paths are designed to meet individual specifications and then combined to determine the overall performance using a high frequency circuit simulation tool such as Ansoft Designer.™ For the first time in the industry, engineers can generate parameterized 3D component models through a design link with circuit simulation. The combination of electromagnetic- and circuit-based analyses boosts design speed and provides increased flexibility to perform "what if" analyses. Since circuit simulation does not account for inter-component coupling and other 3D effects, HFSS is required to verify the entire design. This verification stage may well imply further design-tuning requirements, which are performed by integrating HFSS v9's optimization capability.

Preparing advanced designs for HFSS analysis is measured in minutes, not hours. Complex designs such as the comparator may be constructed within HFSS or easily imported into HFSS from M-CAD via industry-standard geometry exchange formats, such as ACIS, STEP, IGES, or STL. The computer times required for the analysis will vary from a few minutes for simple designs to a few hours for the most complex designs. HFSS enables designers to perform and verify complex microwave design modifications in nearly real-time, where doing so by traditional cut-and-try methods would require days of effort for both manufacturing and measurement. HFSS v9's new design environment provides an implicit treatment of all design parameters. Applying such parameterization, the engineering time required to initiate design changes is essentially eliminated, even for complex designs such as the comparator. 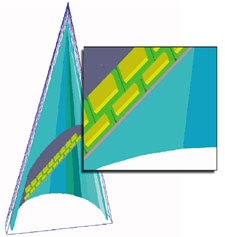 Engineers also may apply HFSS v9 to next-generation antennas and antenna array designs. Figure 2 shows a conical radome enclosing a 3D phased array antenna that was analyzed as a single design within HFSS. The software analyzed this design, with its approximately 30 antenna elements, in less than one hour. Radiation patterns and internal fields are easily examined to assist in optimizing this system. HFSS v9's 3D visualization capabilities have been improved, including the addition of object translucency, a new sensitizing/desensitizing object-selection indicator and a dynamic "spin" graphical mode. A new stereographic mode that applies red-blue shifted images with polarized glasses enables visualization of both geometry and fields in true 3D.

A similar class of applications for HFSS is a frequency-selective surface (FSS). A typical FSS is a large array of elements, such as those that comprise the displayed finite array. HFSS v9 provides "linked" boundary conditions for the efficient analysis of FSS geometries. HFSS v9 has been applied to FSS applications at microwave, IR and optical frequencies. HFSS uniquely provides accurate analyses through treatment of metals as frequency-dependent dielectrics with volumetric adaptive mesh refinement.

In addition to solving mechanical microwave and antenna design applications, HFSS is widely applied in next-generation MMIC and RFIC designs. Figure 3 presents an RFIC differential VCO that was imported to HFSS v9 via AnsoftLinks™ from Cadence® Virtuoso.® Spiral inductors are critical components in many RFIC designs because they occupy the dominant area on the chip and dictate VCO circuit performance. They include thick metals and multi-layer construction, and are truly 3D in nature. HFSS provides highly accurate frequency-dependent loss characteristics for these spirals. The program's ability to consider arbitrarily distributed current flow inside metals has made HFSS the accepted industry standard for the design of RFIC spirals. Accuracy to a user-specified level is assured through the application of adaptive mesh refinement. More simple heuristic meshing algorithms simply do not provide the accuracy required for spiral inductor design or other applications involving complex geometries. HFSS v9 quickly provides extremely general spiral geometries through support of most common scripting languages, including Visual Basic® Script and JavaScript.®

Microwave engineers working in the area of packaging for high speed optical communications chipsets rely on HFSS. Effects such as resonant ground planes, signal coupling and radiated emissions are truly microwave in character, and HFSS v9 analyzes them well. BGA packages are commonly operated with OC-192 and OC-768 (10 to 40Gb/s) digital signals. The overall dimensions of these packages, in combination with the broadband signals in the high speed signal paths, necessitate HFSS's full-wave 3D analysis. These geometries are extremely complex and nearly impossible to construct manually as a solid model. The automated creation of 3D HFSS solid models directly from 2D CAD databases enables the efficient electrical characterization of package designs prior to manufacture. Figure 4 shows a 2D package layout and a 3D HFSS model extracted directly from it. Many package vendors provide electrical models directly from HFSS and rely on the tool for virtual prototype verification of design changes for quick turnaround in custom applications. Successful design of these high speed OC applications is simply not possible without 3D EM-based virtual prototyping.

An XFP module (visit www.xfpmsa.org for more information) was fully characterized with HFSS and Ansoft Designer. Figure 5 shows the board-to-board connector and multi-layered vias analyzed by HFSS. Many high speed PCB designers use HFSS to craft via/pad stackups for improved electrical performance. Parameters such as pad and anti-pad size are tuned for the number of layers and board materials applied in each design. Full-wave analysis is required to consider coupling and energy leakage of the vias due to the high frequency content of the signals. These electrical models are then included in circuit and system-level analyses. For this 16-layer design, the vias were found to be a constraint on the performance of the overall system.

The board-to-board connector of the XFP system (courtesy of Tyco Electronics) was also characterized with HFSS both during its initial design and within the actual environment of the XFP system. The RF signal content of this high speed digital system coupled well to resonances within the connector created due to metals surrounding the connector. These resonances and their sensitivities with respect to mounting of the connector on the host board were easily discovered with HFSS but would have been overlooked in the absence of a full-wave 3D characterization of these components within the actual XFP system environment. Critical performance factors of both the vias and the connector were predicted well in advance of broad deployment of XFP system specifications and design guidelines among the 60 member companies through virtual prototyping with HFSS.

From microwave component, to antenna, to RFIC, to XFP, HFSS v9 enables users with diverse backgrounds and levels of experience to access the power of 3D electrical characterization. The enhanced drawing environment is implicitly parametric, better facilitating efficient design. HFSS v9's accurate adaptive refinement procedure assures that even designers who are not experts in EM simulation can provide reliable electrical characterizations of their components.

HFSS software is easy to use, gives designers access to powerful new capabilities and continues to adhere to the stringent requirement for accuracy. Classical microwave designers, including antenna designers, will notice the improved geometric-design capabilities of v9's M-CAD links, implicit parameterization and integrated optimization capabilities. High frequency and high speed electronic designers will welcome HFSS v9 because it seamlessly ties them to mainstream IC and package tools through AnsoftLinks and high frequency circuit-design-flow tools such as Ansoft Designer. From novice to power users, all will benefit from improved visualizations, more robust solid modeling and automated parameterization. Just as the first version of HFSS began a revolution in the microwave design industry in 1990, HFSS v9 marks the beginning of a new era for EM-based EDA, making HFSS synonymous with next-generation microwave product design.