We use cookies to provide you with a better experience. By continuing to browse the site you are agreeing to our use of cookies in accordance with our Privacy Policy.
Home » Managing Many Devices and Multiple Standards in the Connected Home
Broadband Channel

Managing Many Devices and Multiple Standards in the Connected Home 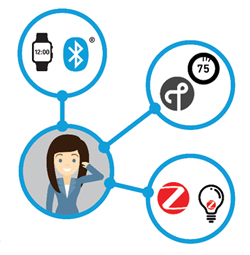 The number of connected devices in our homes and cars continues to rise, and we increasingly rely on them for convenience, comfort, health and safety (see Figure 1). Although connected, these devices communicate using different standards depending on the application. In addition to Wi-Fi, several IoT standards have been developed: Bluetooth® Low Energy (LE), Zigbee® and Thread®. More technologies are coming, such as the Connected Home Over IP initiative, which combines several technologies—802.15.4 and Bluetooth LE—into a single standard.

These low-power, low data rate wireless standards are commonly used in products from door locks to LED lights to appliances. The multiple wireless technologies force product designers to decide, in advance, which technology to use and that choice affects the product’s design. The increasing options make choosing among them and future-proofing products more challenging. While communications devices do have some form of dynamic multi-protocol (DMP) support, it requires tradeoffs; DMP is not sufficient to realize the full benefits of the connected home. Truly seamless connectivity can only be achieved with the capability to simultaneously listen and hear all the devices on the network, not just a few. 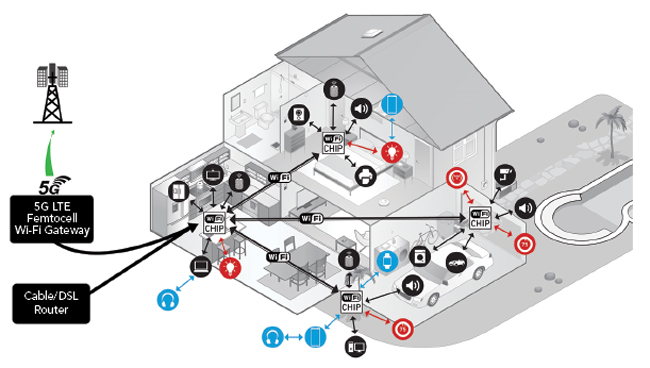 Consider a network combining ZigBee or Thread with Bluetooth LE devices and without ConcurrentConnect support. The wireless node must switch back and forth between standards, communicating with one at a time, the other blocked until the medium becomes free (see Figure 2a). In addition to inefficiency, switching between the standards can drop the link and increase latency, limiting the data exchanged through both networks. With ConcurrentConnect technology, the node has concurrent listening capability and near-instantaneous switching from Bluetooth LE to Zigbee or Thread, with little dropped communication, if any (see Figure 2b). Communication between devices is faster, more efficient and scalable, yielding more data packets exchanged. ConcurrentConnect support improves the exchanges among devices using different protocols to levels not achievable using separate nodes, providing designers the ability to support multiple standards more easily.

Developing a single radio to support multiple protocols simultaneously posed major hardware and software challenges. Each protocol has unique specifications governing how and when devices listen to incoming packets and transmit outgoing packets. Some protocols define fixed time intervals during which the radio predicts when it should switch to the appropriate frequency. Most of the time—especially while listening, before the connection phase, while detecting candidates for connection—the radio must constantly detect incoming packets asynchronously, without prior knowledge of when it should open its receive window for incoming packets. Additionally, Qorvo’s solution required a simple interface, so developers could be agnostic to the various protocols.

WHY IT WORKS BETTER

Qorvo’s concurrent listening technology shifts the paradigm. It enables asynchronous interleaving of packets from different protocols on the hardware, the device virtually listening to multiple protocols at the same time, with no blind spots while listening. This maximizes use of the medium, as ConcurrentConnect technology maintains a synchronized connection, at the same time listening to asynchronous events from multiple protocols. It is abstracted with a SDK, which provides straightforward APIs so the application developer can easily integrate the capability into new products.

The key differentiator of ConcurrentConnect technology compared to DMP is predictability versus unpredictability. DMP is based on the predictability of the packets received and sent. It requires knowing the times to switch to Bluetooth LE, then back to Zigbee or Thread, for example. ConcurrentConnect supports unpredictability: simultaneous synchronous and asynchronous operation. It uses the unique hardware features in Qorvo’s platform to detect and identify packets efficiently. Once detected, each packet is identified, real-time, by the hardware, which sends the packet to the appropriate protocol stack, eliminating the need for additional, routing logic at the higher software layers (see Figure 3). The SDK enables combinations of the preferred protocols for the application, so the application “thinks” it has its own radio. This simplifies application development and enables developers to focus on the differentiators of their products.

Supporting high frequency data transfers among multiple devices, ConcurrentConnect technology enables new use cases across the home network - gateways, hubs and end devices. A gateway can seamlessly switch among the standards and protocols on the home network, enabling more devices using different standards to be connected and controlled. Device owners are no longer locked into a prior wireless technology when expanding their home applications. With gateways able to understand multiple protocols at the same time, enabling a mix of connected devices, new IoT use cases enabled by the end devices themselves become possible. For example, devices can be connected to Bluetooth LE Mesh and Zigbee or Thread networks at the same time, or a Bluetooth LE-based smartphone can be connected in a Zigbee or Thread network.

The ability to listen concurrently also enables new uses by combining protocols. For example, a device connected with Zigbee or Thread can be aware of its location by scanning for beacons from Bluetooth LE trackers. Connected lighting will benefit, as ConcurrentConnect technology enables a light to be controlled by Zigbee, Thread and Bluetooth LE switches simultaneously. Motion sensors, thermostats and other sensors and control devices have similar capabilities. 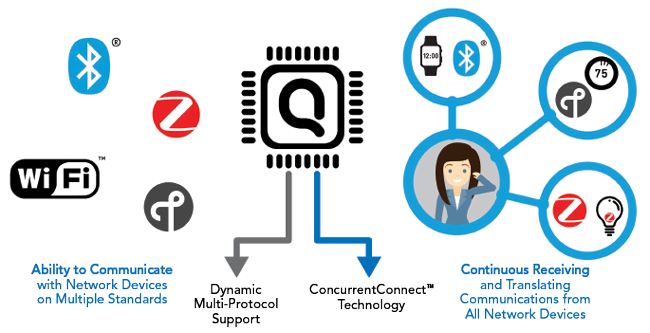 With multiple standards and new devices developing quickly, Qorvo’s patented ConcurrentConnect technology provides the next step beyond DMP (see Figure 4). For IoT applications, it offers efficiency and flexibility for greater concurrence and interoperability among multiple wireless protocols and standards. It is no longer necessary for consumers to be locked to one standard and compromise future connection options. Almost any use case becomes possible.