We use cookies to provide you with a better experience. By continuing to browse the site you are agreeing to our use of cookies in accordance with our Privacy Policy.
×
Home » How the RF Front-end World is Being Ruled in the 5G Era
Industry News 4G/5G/Cellular When 4G was introduced 10 years ago, it was a technological revolution. The consumer could access the Internet with a decent connection as compared with 3G. Then came apps on smartphones that made life much easier. As a result, the smartphone market started to boom. Now consumers are living with their smartphones and are using them more and more to communicate with their peers, book a restaurant, do online shopping and much more. They have become a utility that everyone now possesses.

5G: Necessity to Sustain Use of Smartphones
Many sources report that mobile data consumption is increasing exponentially and should exceed 160 EB/month by 2025 from 35 EB/month, currently. This estimation concurs with what has been seen in the past in terms of data consumption increase but this load is not sustainable on a 4G network. That’s where 5G comes into play. Of course, 5G brings some benefit for the consumer with increased download speed and there will be some new use cases over time, but the main reason for rolling out 5G now is the network capacity that needs to be augmented far more than can be done with 4G. As a result, countries with high mobile data consumption profiles, such as South Korea, China and USA, have been first to build their 5G networks. In terms of 5G service adoption, China is far ahead with over 75 million 5G subscribers as of June 2020 (see Figure 1), driving most of the 2020 global 5G device volume. However, many countries should soon follow, rapidly increasing worldwide 5G subscriptions. 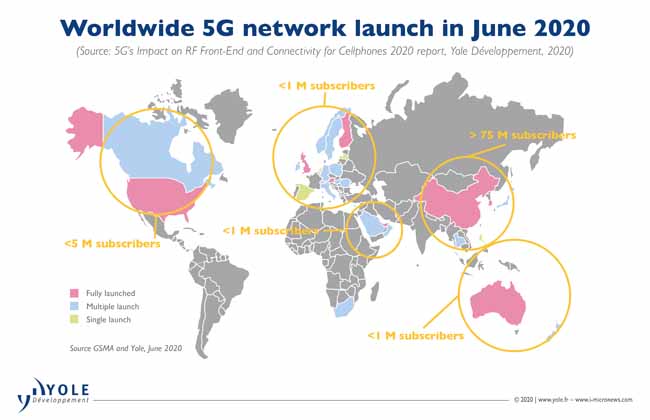 Other interest in 5G lies in revenue diversification for telecom infrastructure players, including the much-hyped connected objects through what is called massive Machine Type Communication (mMTC). mMTC is expected to be used to connect everything at a huge scale, but while network operators are preparing for this connected object wave to come with 5G modules, most of the 5G device volume today is coming from smartphones. 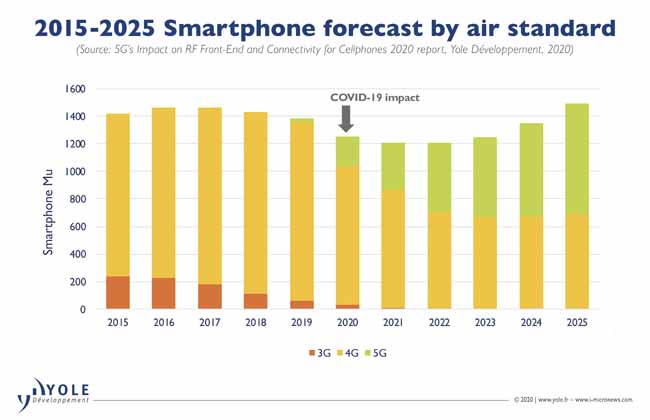 Addressing 5G for All
Pricing for 5G RF front-end is dependent on the device. As has been the case for 4G, there is a wide range of prices for the 5G RF front-end depending on the smartphone market segment (tier 1 phones, etc.) and the level of 5G support that comes with it, as shown in Figure 3. Multiple 5G devices have been launched in the Mid-Tier segment, complementing the high end 5G smartphone initial offering, opening the market to a wide range of users. These mid-tier phones nonetheless offer only sub-6 5G connectivity as of today, and 5G mmWave is supported mainly by the high-end segment and the US market. 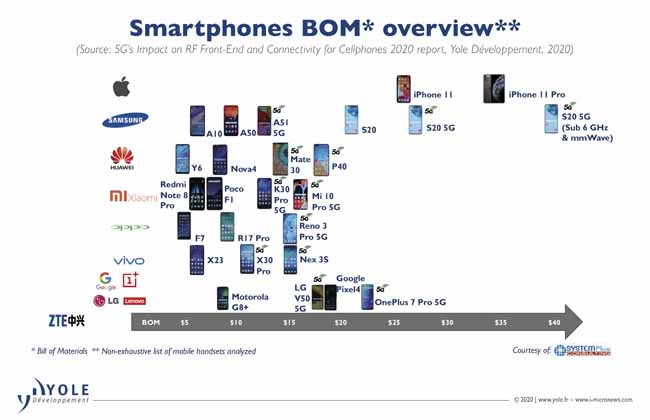 The RF front-end price spread is directly linked to architecture choices made by the OEM, using more or less integrated architecture. But overall, 5G is driving up the RF content for all tiers as there are new features to be supported by the phone. Indeed, 5G devices now must support 4x4 MIMO on the downlink for bands above 2.5 GHz whereas it was optional on 4G. Similarly, for the uplink 2x2 MIMO is preferred by the network operators, though a single transmit link is often considered as good enough for cost optimized 5G devices. And as dual connectivity of 4G and 5G is required in most cases, the 4G content will not decrease in the short term. Practically speaking, that means that smartphone RF boards are increasingly populated with additional components and modules as described in Figure 4. 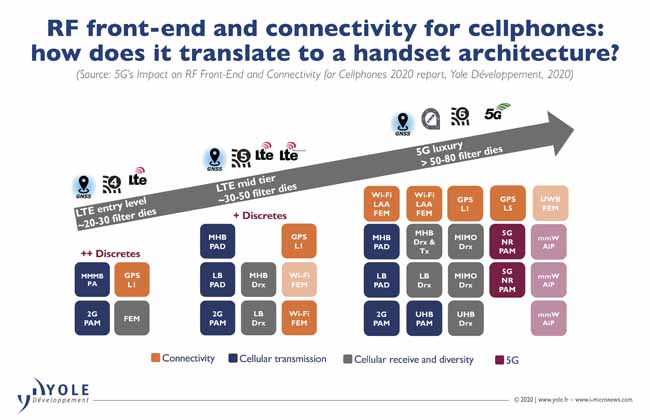 As a result, despite the modest growth of smartphone volumes, the market for PA, FEM modules and RF components of all kinds (LNA, Switch, Filters, Antenna Tuners) will grow with an 11% CAGR between 2020 and 2025 and should reach $25B by 2025 as depicted in Figure 5. This number also includes connectivity components (Wi-Fi, BT and UWB).[2] 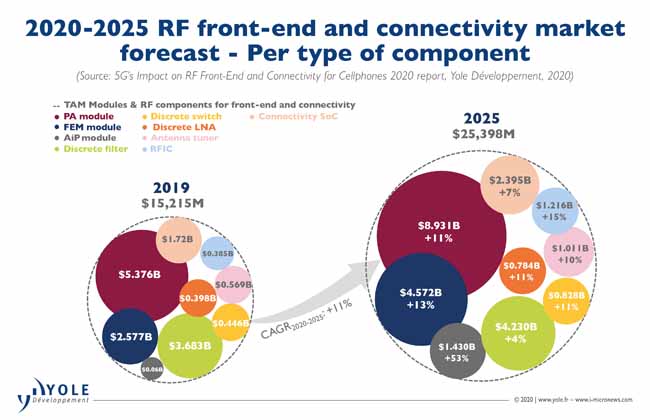 Geopolitical Tensions Accelerate Investment and Competition From China This appealing market is emulating a fierce competition in the RF front-end supply chain. The market leaders (Murata, Skyworks, Broadcom, Qorvo and Qualcomm) together hold over 75% of the market and a myriad of companies are sharing the rest. There is a clear domination by US based companies in the RF front-end space that manage to secure design wins from all major OEM brands year over year. Indeed, US RF front-end companies are often preferred even by Chinese brands thanks to the superior performance they offer and the decades of experience they have cumulated. Nevertheless, since the degradation of the geopolitical situation between the USA and China, things have started to change as US companies now need to get a license to do business with banned companies such as Huawei. This has resulted in strong investments made in China to develop the local RF front-end ecosystem (among other technological fields). This could lead to significant changes to the RF front-end market shares as Chinese OEMs hold close to 50% of the smartphone market, as shown in Figure 6. 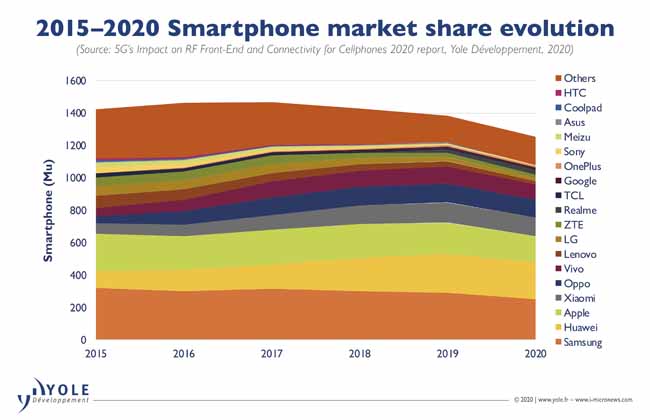 But before this happens, there still are some technological gaps to close. Indeed, Chinese RF front-end makers have started to be very successful with critical components, such as switches, LNA and tuners, and can supply modules with a certain level of complexity. Nevertheless, there is still progress to be made on the filter side as well as on complex and highly integrated PA modules, as shown in Figure 7. In the meantime, Japanese, Korean and European players are actively innovating as well and intend to keep their market shares. 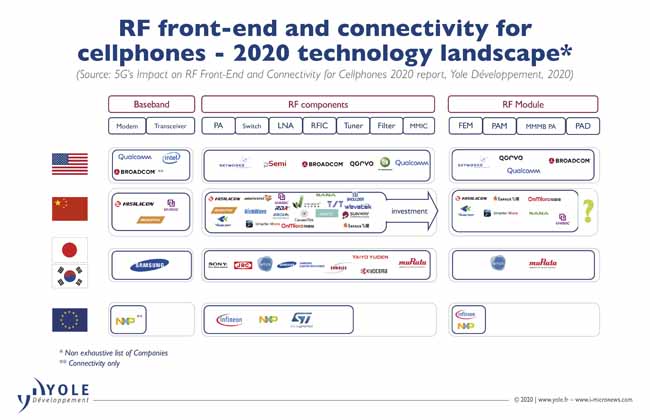 Leadership Will Come From Innovation in Filters
One of the most critical components in the RF front-end is the filter. The more complex the front-end becomes, and the more frequency bands the smartphone addresses, the more filtering is required, and the more components are needed. A variety of complementary technologies have been developed in order to accommodate multiple performance and price point tradeoffs. SAW is the most common one and is available from both leading IDMs and foundries. SAW devices are used by default in the diversity module where filtering requirements are less demanding, for lower frequency bands, and in standalone discrete configurations. This is the most used technology, addressing over 50% of cases. BAW filters, on the other hand, offer superior performance regarding insertion loss and out of band rejection at the cost of a more complex manufacturing process. They are used mostly in complex PA modules as efficient ways of multiplexing multiple bands to cover the numerous carrier aggregation cases requested by the network operators (see Figure 8). This BAW technology is offered mainly by the leading RF front-end players, except for Murata – the filter market leader – which for its part invested in two quite different technologies in order to compete with BAW devices: TF SAW and XBAR. TF SAW stands for thin film SAW and XBAR is the filtering technology developed by the American company Resonant. Both are alternative technologies that offer interesting performance while keeping the process complexity at the level of a SAW device. TF SAW is temperature compensated by construction and enables improved performance and form factor compared to standard SAW technology. XBAR technology for its part can accommodate a very wide bandwidth and mmWave frequencies. That makes both technologies very interesting for the filtering needs of the 5G era. 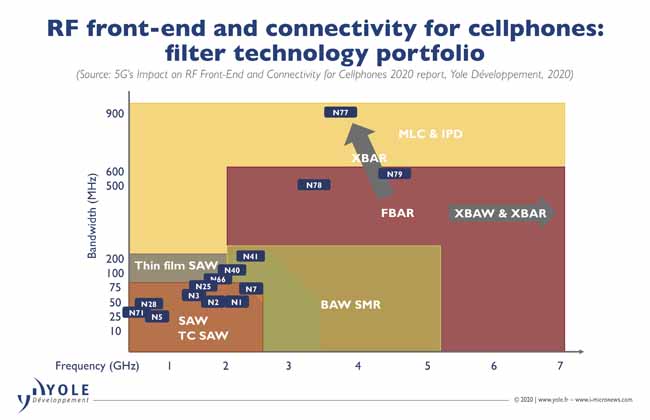 Beyond Mobile Handsets
5G will reshape consumer electronics RF front-ends and more. After improving mobile broadband experience on smartphones and connecting the unconnected on a broadband network (through FWA for example), network operators intend to extend their business footprint across other market verticals, including industrial automation and automotive connectivity. These new business opportunities are becoming addressable thanks to the coverage and implementation work done through consumer 5G today. 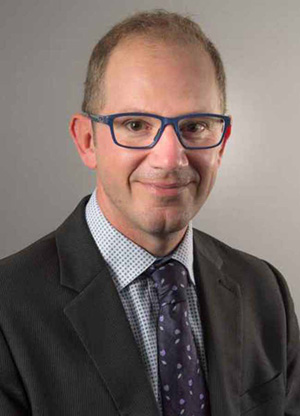 As a Technology & Market Analyst, specialized in RF devices & technologies within the Power & Wireless division at Yole Développement (Yole), Cédric Malaquin is involved in the development of technology & market reports as well as the production of custom consulting projects.

Cédric graduated from Polytech Lille in France with an engineering degree in microelectronics and material sciences.

This article was written in collaboration with Antoine Bonnabel, Technology & Market Analyst, RF devices and technology at Yole Développement (Yole).

How GaN is Changing the SATCOM RF Front-End