We use cookies to provide you with a better experience. By continuing to browse the site you are agreeing to our use of cookies in accordance with our Privacy Policy.
Home » Intensifying Technology Competition in the Acoustic Wave Filter Market 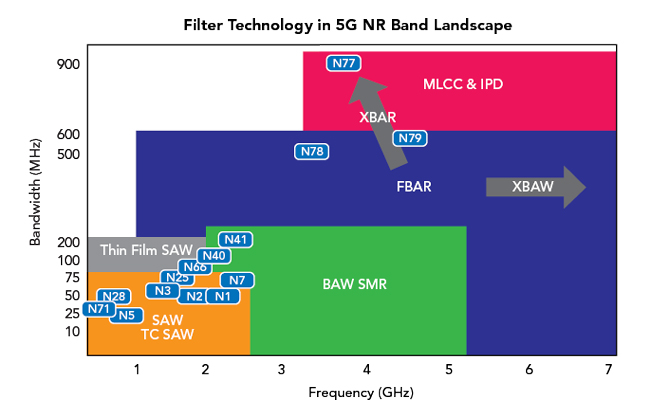 This situation is no longer the case in the market as several companies have developed technologies that will disrupt the filter market. Several trends can be observed:

In this article, the acoustic filter technology currently available on the market is described including the costs for both SAW and BAW devices followed by an overview of the upcoming technologies for future applications, including new structures and costs.

In the filter family, the substrate is the first means of differentiation between the players. The most suitable substrate technology for smartphones and other small form factor applications is a piezoelectric material. The filters based on this technology rely on the electro-mechanical effect of the material to propagate the RF signal and filter it at a certain frequency. Two main technologies split the market for piezoelectric filters, BAW and SAW. For standard SAW, eight companies that supply such devices are included in a comparative report shown in Figure 2. For TC-SAW, the number of manufacturers drops to four. More than half of them are U.S.-based companies: Qorvo and Skyworks, that only provide TC-SAW components using in-house design, and Qualcomm, with a complete portfolio from legacy SAW to SMR-BAW filters. The fourth is an Asian-based company, Murata. 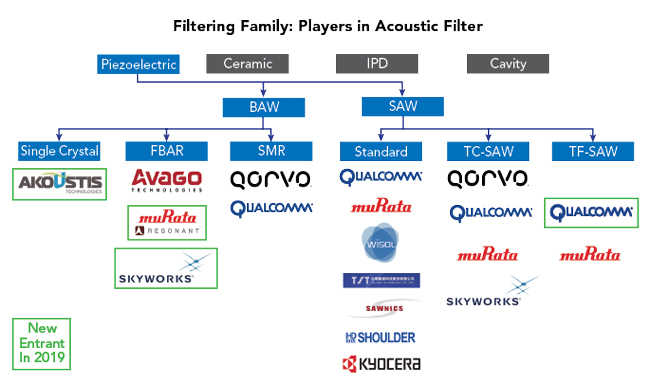 At low frequencies, SAW filter technology is well known and small companies are competing with the market leaders to create an alternative filter ecosystem. As SAW filters use lateral propagation of the high frequency waves, it only requires simple manufacturing processes. Several Asian-based companies have risen over the past few years to introduce their own technology at a low cost, to be integrated into the Chinese domestic market in discrete models like Vivo, Huawei, etc. This has spawned new companies, like Resonant, that provide simulation tools to enable fabless companies to quickly develop filters and foundry services to manufacture them. Wisol, a Korean-based company that provides discrete filters and modules to OEMs like Samsung, has supplied a module with a single die SAW duplexer designed by Resonant for a low-end smartphone, the XCover 4. This standard technology is usually based on metal electrode (aluminum, titanium, gold, copper) forming the interdigital transducer (IDT) on a single crystal piezoelectric like lithium tantalate (LT) as shown in Figure 3. The result of such a simple process is a very low cost device that fits low frequency filtering requirements but is not suitable for selected high frequencies like band 8, 26 or 13 on the LTE protocol, or better performance demanded by 5G. 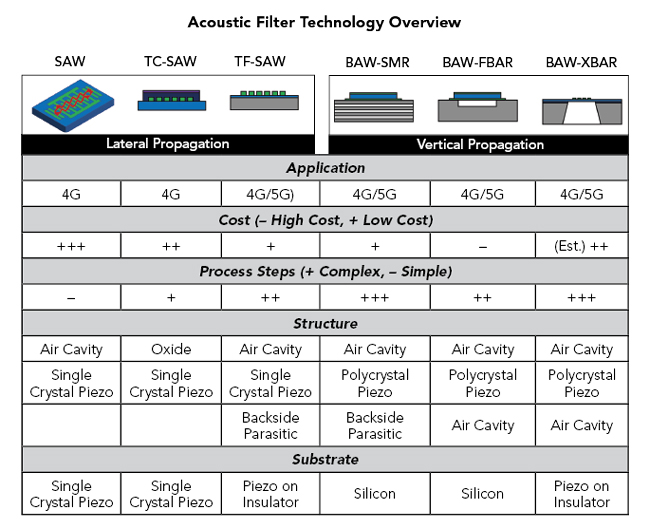 For more challenging bands, TC-SAW filters are required and fewer companies supply these. The gap between some frequency bands is very tight, so performance drift, mainly due to thermal changes on the structure, must be controlled to avoid filtering overlaps. TC-SAW filters have been built specifically for these cases. TC-SAW technology still uses a thin film deposition manufacturing process. However, the process adds features to enhance the isolation, by adding thermo-compensation layers. At the substrate level, the change can be seen compared to a standard SAW filter, with the use of a lithium niobate substrate that provides better acoustic wave velocity (see Figure 3). Also, to enhance the performance of the IDT structure, other materials are considered for the electrode. These materials, such as silver, platinum, molybdenum or chromium, offer better acoustic impedance while handling higher power. To isolate the IDT from any environmental changes (like temperature), the structure is usually covered with silicon oxide and sometimes with an additional silicon nitride layer. Of course, these enhancements have a cost: TC-SAW adds 60 percent cost premium compared to traditional SAW filters.

Finally, in the SAW filter segment, there is a new technology called TF-SAW filter that provides very high performance compared to the standard SAW filter. The performance can even compete with BAW filters in some frequency bands. This technology relies on piezoelectric material deposited on an insulator. In this technology, the thermal compensation mechanism comes directly from the substrate.

In 2020, two major companies are providing TC-SAW devices, Qualcomm and Murata. Murata first introduced the technology, which has already been commercially adopted, and Qualcomm added this technology to its portfolio in the beginning of 2020. Only a few substrate suppliers currently manufacture and offer this material. The manufacturing of the substrate relies on two main process technologies: one with a grinded LT substrate on silicon and the other with Piezo-on-Insulator substrate using a Smart-Cut®-like process from Soitec. This new technology provides a great opportunity for substrate manufacturers, such as NGK and Soitec. Other advantages of this technology are lower losses, wider bandwidths and higher frequency than traditional SAW filters. It also allows the integration of multiple filters on one device reducing the total footprint.

By analyzing the main SAW technology from various players, the relationship of the SAW filter cost per area has been calculated and is shown in Figure 4. It appears that there is a linear increase in cost for each technology, irrespective of the manufacturer. The only differences are the SAW technology used. TC-SAW or high performance SAW filters are almost two times costlier than standard SAW filters. TF-SAW has an even higher cost, mainly due to the substrate manufacturing process. However, TF-SAW is very attractive notwithstanding the cost compared to a BAW filter. The performance of a TF-SAW filter is very close to that of a BAW filter in some bands where the BAW filter is the leading technology. For example, in LTE Band 40, the ultraSAW technology from Qualcomm achieves better insertion losses than competing BAW filters. Moreover, the thermal handling is better for TF-SAW than BAW filters. For ultra-high frequency (3.3 to 6 GHz), the BAW filter is still the leader in performance, even more with the implementation of 5G. 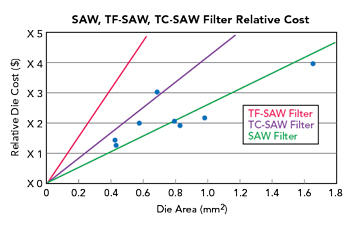 The main difference between BAW and SAW filters, besides the structure, is the piezoelectric material that the filters rely on. SAW filters use a single crystal piezoelectric like LiTaO3 or LiNbO5 as a substrate where BAW filters use polycrystal aluminum nitride that provides higher coupling coefficient and higher wave velocity in the material. For several years, the BAW filter market has been dominated by four leaders, Avago Technologies, Qorvo, Taiyo Yuden and Epcos. In the past few years, however, the market has changed a bit through acquisitions and joint ventures. Avago is now part of Broadcom and Epcos joined TDK, which is now part of RF360, owned by Qualcomm.

This year, the market could experience more competition with the entrance of new players with new technologies for BAW filters. Skyworks has started its introduction into high volume products of its in-house FBAR technology. Like Broadcom’s FBAR technology, the die is packaged using wafer level chip scale packaging technology using through silicon vias (TSV) and two silicon substrates. However, its structure has an air cavity realized using a sacrificial oxide on top of the silicon substrate, unlike Broadcom, which etches the silicon substrate to realize a “swimming pool” under the resonator.

Another player, Akoustis, will ramp up this year in the CPE market with a product that relies on a single crystal piezoelectric material. The main product of the company is a FBAR-type structure with a piezoelectric growth step using metal organic chemical vapor deposition deposition technology. The single crystal material allows for a better coupling factor and low insertion losses. This enables very good performance at higher frequencies, such as 5.2 to 5.6 GHz. There are other players, like Murata with Resonant, which have developed an XBAR device that completes the offerings of the company and has a similar structure to FBAR with piezoelectric on top of an air cavity. However, the resonator is different because of the use of a thin film piezoelectric material and IDT-like electrodes. These two technologies are emerging in the market but the cost is expected to be higher for XBAW from Akoustis and similar for XBAR from Murata/Resonant. 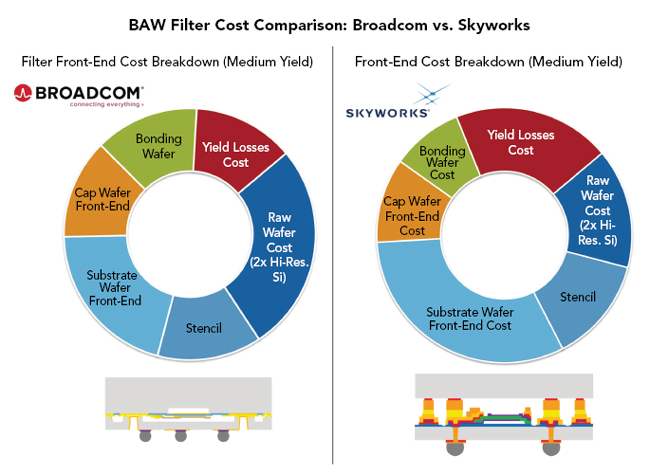 By looking at the actual FBAR-BAW filter market, cost differences between Skyworks and Broadcom have been evaluated and shown in Figure 5. According to the simulation, Skyworks appears to be twice as costly as Broadcom. This cost difference is due to two main reasons: first, the number of etching steps in the process from substrate wafer front-end to realization of the resonator and second, the cost of the TSV and the manufacturing of the sealing frame.

Another way to implement BAW technology is to develop a resonator solidly mounted on silicon substrate. This technology, called SMR, is used by Qorvo and Qualcomm. To propagate the acoustic wave through the thin film while isolating it from substrate parasitics, an acoustic mirror is realized using multiple silicon oxide layers and a metal layer beneath the resonator structure. This is realized without any micromachining of the silicon substrate but requires specific packaging features to protect the resonator from the environment. In the case of Qorvo’s SMR technology, the resonator is protected using an epoxy-based wall and cover that forms an air cavity on top of the resonator area. For Qualcomm, the air cavities are realized using sacrificial oxide and SiN with an air vent. After the sacrificial etching, a polyimide film is deposited on the structure sealed with another SiN layer. In both devices, the redistribution of the electrode from the resonator is made with copper pillars which are lower loss interconnects than solder balls.

According to Yole Développement, the overall mobile handset filter market was valued at $7B in 2019, with SAW- and BAW-based technologies accounting for $4.7B and $1.9B, respectively. The remaining filter business is based on non-acoustic filter technologies (MLC and IPD). As the number of supported bands in a handset keeps increasing and more complex filter functions with carrier aggregation are required plus support for 5G new radio while ensuring coexistence with other radios is posing additional stress for the performance of the filter, the market for higher performance filters will grow. Therefore, BAW and TF-SAW filters will have the largest growth rate, explaining the rising interest of market leaders in these technologies, while legacy SAW filters will only have an organic growth.

The actual front-end module market is well settled at this point. Market leaders Broadcom, Qorvo, Skyworks, Qualcomm and Murata are sharing the throne and small players are taking legacy market share. Each company has developed its own technology and relies on its technological position. Broadcom, with its FBAR-BAW filter, still dominates the high performance filtering market but Qorvo and Skyworks are following closely behind. In the first instance by providing the same degree of performance at Power Amplifier Integrated Duplexer level thanks to packaging innovation and a new type of FBAR-BAW filter that could compete with the other two players.

One of the Asian-based companies that is growing every year, Murata is a company to follow. With the inclusion of TF-SAW in its portfolio and development of XBAR in partnership with Resonant, the company is moving close to the same level of a component provider as Qualcomm and could became a top competitor. With the recent U.S. ban of Huawei, the company has increased its sales volume by garnering a lot of design wins for smartphones from Chinese OEMs. As no settlement is yet being agreed between the two countries, we could expect a rise in the number of Chinese filter manufacturers in partnership with active device manufacturers, like Maxscend, to provide front-end modules and replace components that rely on the U.S. manufacturers.