We use cookies to provide you with a better experience. By continuing to browse the site you are agreeing to our use of cookies in accordance with our Privacy Policy.
×
Home » An R&D Investment Strategy to Maintain Aerospace & Defense Leadership
Aerospace and Defense Channel

Editor’s Note: In this year’s Aerospace & Defense Electronics supplement, we are fortunate to have two perspectives from senior members of the defense industry, who discuss challenges faced by the U.S. in maintaining technical superiority amidst the explosion in low-cost commercial technology.

Bill Conley, the chief technology officer at Mercury Systems and former director for electronic warfare (EW) in the Office of the Secretary of Defense, examines the imbalance between Department of Defense (DoD) and commercial R&D. To counter China’s growing power, he argues the U.S. must leverage commercial technology with targeted funding for unique defense capabilities.

Ben McMahon, a technology development manager at BAE Systems’ FAST Labs, describes how the adoption of mmWave spectrum by commercial systems and the underlying technology are challenging the capabilities of EW systems. He writes the future of electromagnetic spectrum operations will require multifunction systems designed for rapid upgrades, blending commercial and defense technologies. 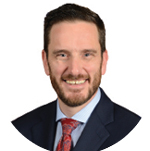 Our RF/microwave industry is unique in the larger aerospace and defense (A&D) marketplace. Fundamental technical and economic reasons drive our industry to have distinct and innovative processes to meet our national security needs. Frequently, we are the trailblazers, pushing ahead for our customers, exploring advanced new technical approaches and processes, all the while providing amazingly complex components, modules and assemblies. For that reason, it doesn’t surprise me that over the past century, we have historically been early adopters of key innovations in response to evolutions in the global marketplace. This article provides context for the continuing changes in the A&D landscape and how we can lead in implementing these changes to meet our national security objectives. 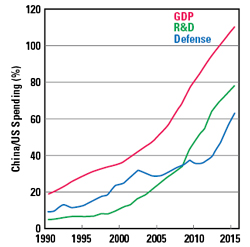 From my experience in the Pentagon, seven different methods of international power are commonly discussed: diplomacy, information, military, economic, financial, intelligence and legal. These are commonly referred to by the acronym DIMEFIL (pronounced dime-phil). Prior to the foundation of global communications, diplomacy was paramount. Through the two world wars, military power was vital and supported through economic power. The Cold War was largely based on information and economic power, with military taking a back seat. As more financial transactions become electronic in the global marketplace, sanctions became an effective method for deploying financial power. The ratios among the methods are constantly evolving; but together, they underpin how innovation occurs and how technology is adopted by governments.

Several of these methods of international power can be directly measured with common metrics. Economic power can be approximated by a nation’s gross domestic product (GDP). Figure 1 shows the growth of the U.S. GDP since 1980. Figure 2 shows defense spending, a proxy for military power, and R&D investment - the implications of the latter will be discussed later in this article - over that same period. All the values are in constant-year dollars to provide a fair comparison. In the second graph, both the Cold War buildup and the Global War on Terror following 9/11 are readily observable by upticks in defense spending. Unlike the peaks and troughs in military spending, R&D investment has steadily increased and is an increasingly important part of international power, as it underpins both military investments as well as economic growth. These macroscopic metrics can be compared among countries using well-established data sets. All the data uses purchase power parity (PPP) conversation rates, which is a fairer comparison, not only of the exchange rate but also the cost of goods.

Figure 3 shows the relative size of the economy, military spending and nationwide R&D of the Chinese state compared to the U.S. The direct comparisons are not exact but do show important trends. For example, this analysis assumes the published U.S. and China budgets show the full investment; in both cases, the values shown are likely lower bounds. Note that a PPP comparison shows the Chinese state with a larger economy than the U.S., largely due to the lower cost of materials and goods in China. The data also shows a much faster growth rate for China’s economy, and China has prioritized increasing R&D spending faster than they have increased military spending. While the U.S. still invests more in R&D, the 60 percent mismatch with China today drives us to a very different strategy than we pursued during the Cold War. The size of the American economy supported substantially more military and R&D spending in the U.S. than the Soviet Union could match. The data presented here reveals we cannot out-innovate in today’s era of Great Power competition.

While the RF/microwave industrial base has experienced these investment mismatches for decades, emerging technologies such as artificial intelligence will accelerate the mismatch. It’s estimated the training capability of neural nets is doubling every 3.4 months, which makes Moore’s Law - a doubling of transistor density every 18 months - appear as a relaxed speed of adopting new technology. The military impacts from this rate of change are profound. It means that a system is only 10 percent as capable a year after fielding and only one percent as capable after two years. Many military systems operate for a decade; at the end of this typical life, they would only have a billionth the capability of a new system. As the technical advantage of a newer system will translate into an operational military advantage, we should expect to see military systems continue to drive toward open systems, composability and rapid upgradability. Military systems lacking these traits for electronics will be obsolete very quickly. 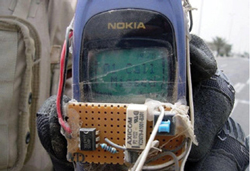 Another example of commercial investment outpacing federal investment relates to 5G. Earlier in my career, I personally reverse engineered a variety of improvised explosive device (IED) detonators using commercial devices. A commonly shared photo at the time (see Figure 5) reminds us of our former threat zeitgeist. As a result of those experiences, I’m skeptical that 5G devices will be broadly adopted by militaries because of the mission vulnerabilities introduced. However, the expanded frequency range of 5G devices into Ka-Band is developing new modeling and simulation capabilities, analog components and broadband transceiver technology. All these advances will substantially impact A&D systems operating at Ka-Band. The lower price and globally democratized design capabilities mean we should expect a proliferation of Ka-Band systems in the next few years, due to commercial investment being transferred back into military systems.

I’ve focused so far on the technical aspects of investments, which are underpinned by company cultures. Most A&D companies are valued largely on the return on invested capital. Technology companies are valued on growth. The need to sustain growth will drive technology companies to adopt new innovative approaches, even faster in the future. However, A&D companies may view capital investments as being prohibitively high when measured by the return. The impedance mismatch between the nation’s industrial base and the self-identified defense industrial base (DIB) will continue to grow.

This is not the first time that the DIB and national industrial base have been intertwined, however. The stories during World War II (WWII) of auto manufactures responding to defense needs is well known. Perhaps less well known, the original investment in Silicon Valley largely came from the needs for electronic warfare systems during WWII. Steve Blank’s “Secret History of Silicon Valley” does an excellent job telling the full story of how investments during the 1940s shaped the culture of responding quickly and developing amazingly complicated technical solutions. Even during WWII, a typical electronic countermeasure was only useful for about four months, when it was countered by the adversary. The operations analysis book “U-Boats in the Bay of Biscay” discusses this in detail.

As we’ve seen again this year, the entire country’s industrial base is capable of mobilizing to meet our security needs, evident in the global response to the coronavirus. Manufacturers from defense to fashion to consumer goods to automotive have pivoted to make personal protective equipment and medical devices. The pivot occurred within a month to respond to a rapidly emerging threat to our health and livelihoods.

Quoting the late Deputy Assistant Secretary of Defense for Tactical Warfare Systems, Jimmy MacStravic, “We move at the speed of trust.” Returning to the development of open systems, fully sharing interface documentation is critical. Most standards need to be formed in collaboration among purely commercial companies and those serving the A&D market. As we’ve seen, commercial investments will drive many important advances in the future; however, physics is application agnostic. I am hopeful the design tools and fundamental understanding will be fully and quickly used in both commercial pursuits and A&D applications. Critical capital investments will be required to align these ecosystems.

Many of today’s defense challenges involve the integration of advanced technologies onto platforms. Similar challenges drove the automotive and aerospace markets during past decades. As we look to an IoT future, I am hopeful that more of the commercial composability will be applicable to managing the complexity of future military systems. It’s obviously quixotic to assume that all the challenges of multi-domain operations will be addressed by commercial advancements, but best practices need to be broadly shared to realize - and afford - the future operating concepts of the DoD.

In summary, it’s an exciting time to work in a business on the technological seam between commercial and defense applications. We’ll see this continue to be critically important: The strategies from the Cold War are based upon substantially different assumptions, so new processes, new policies and adopting new solutions faster will be increasingly important. I fully expect the rate of change will continue to accelerate in the RF/microwave portion of the A&D ecosystem. As a community, we are well positioned to lead the nation’s defense into the future.