We use cookies to provide you with a better experience. By continuing to browse the site you are agreeing to our use of cookies in accordance with our Privacy Policy.
Home » High Linearity mmWave Mixer and LO Driver for EW Receivers 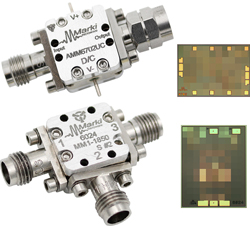 High linearity electronic warfare (EW) receivers for radar warning receivers, jammers and electronic countermeasures are among the most important capabilities for the modern warfighter. A common sub-component in an EW receiver is the microwave tuner, which scans across frequency - frequently from 2 to 18 GHz - and converts signals to a baseband receiver. A direct conversion architecture from this band to a low IF generates excessive spurious signals, requiring steep channel selection filters. An alternative approach up-converts the band with a high side local oscillator (LO) to a high IF, followed by filtering and down-conversion to a low IF.

To support this alternative architecture and achieve the highest linearity, Marki Microwave developed a GaAs MMIC mixer (MM1-1850S) and LO driver amplifier (AMM-6702) chipset. The mixer has a wide RF/LO bandwidth from 18 to 50 GHz, an IF spanning DC to 20 GHz and exceptional IP3 and spurious performance. Marki developed the LO driver to provide sufficient drive for high linearity mixers such as the MM1-1850S. With greater than 20 dBm saturated output power over temperature and more than 20 dB gain over temperature, the AMM-6702 can drive an H or S diode mixer from a 0 dBm input source across −40°C to above 85°C. It can be biased to consume less than 1 W of power, even in heavy saturation, with an added benefit of operating above the traditional 45 GHz cutoff for GaAs PHEMT amplifiers. This amplifier has enough bandwidth and power to drive an H diode mixer as high as 55 GHz, providing additional capability for the microwave tuner.

Both the MM1-1850S mixer and AMM-6702 LO driver are available in connectorized modules and as wire-bondable die.