We use cookies to provide you with a better experience. By continuing to browse the site you are agreeing to our use of cookies in accordance with our Privacy Policy.
Home » Modular, Open Architecture Transceivers Enable Next-Generation EW Systems
Aerospace and Defense Channel 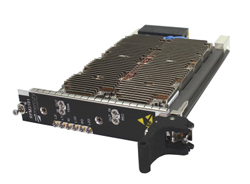 As the defense industry continues to push for cost savings and improved delivery schedules, electronic warfare (EW) system designers are faced with new challenges. Where the previous development model relied on custom subassemblies that proved to be high cost, the emerging model leverages common designs and open standards to reduce cost and expedite delivery. This is especially critical for high performance microwave front-ends. Their technical complexity and specific performance requirements have traditionally led to custom designs and unique form factors.

To address this need, companies like Mercury Systems are introducing common standards and a modular design philosophy. This new approach is demonstrated in Mercury’s RFM3101 wideband microwave transceiver. Offering low spurious RF performance from 6 to 18 GHz in a convenient 3U OpenVPX™ form factor, the RFM3101 integrates up- and down-conversion modules, image rejection filtering and built-in LO generation (see Figure 1). This compact and rugged module achieves low phase noise and a 1 GHz IF bandwidth. 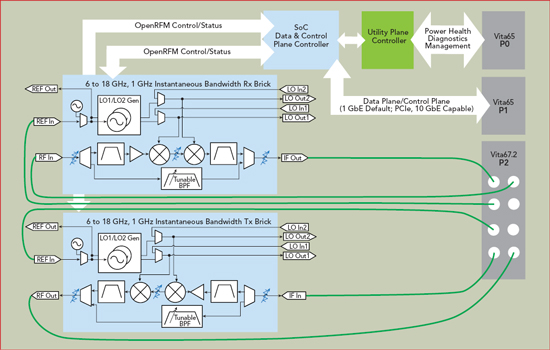 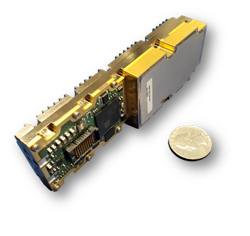 Figure 2 The RFM3101 transceiver was designed to the OpenRFM form factor.

The key to Mercury’s modular design is the OpenRFM™ architecture. This approach defines the internal RF interfaces, maximizing the product’s flexibility and enabling rapid design modification. The RFM3101 leverages this architecture by including two OpenRFM module sites (see Figure 2). The standard configuration consists of one transmit module and one receive module. However, with the standard interface, the transceiver can easily be customized for specific applications by swapping out the microwave modules. For example, a variant can easily be created with two receive and no transmit channels. The same modules can be inserted into a 6U OpenVPX product for a combined total of five transmit and receive channels.

As new technology becomes available, RF performance can be improved through modifications in the individual modules. This reduces both the cost and timeline for product updates. Additionally, this approach supports customization to specific program needs by limiting the scope of the design modifications. Parameters such as instantaneous bandwidth, frequency range and output power can be adjusted at the module level instead of requiring a full product redesign. By offering a standard product with the option to customize, Mercury Systems supports customers looking for an off-the-shelf solution and those requiring custom design.

The OpenRFM architecture simplifies the manufacturing process by separating the build of the sensitive microwave modules from the build of the control and digital blocks. Prior to final integration, the microwave modules are assembled and tested by Mercury’s experienced RF and microwave technology group. This team combines expertise with automated assembly at the die level with testing and troubleshooting highly integrated microwave subassemblies to rapidly produce high quality hardware. To ensure compatibility with Mercury’s IF processing technology and the OpenVPX standard, the final integration is performed by Mercury’s mixed-signal technology group. Through the defined OpenRFM interface, each team applies its technical expertise with the confidence that all the pieces can be combined efficiently.

An additional benefit of the RFM3101 transceiver is its compliance to the OpenVPX (VITA 65) standard, which simplifies the process of integrating the module into a system with other OpenVPX products. Instead of spending significant resources developing custom interfaces, OpenVPX enables easy integration of the RFM3101 microwave front-end with a direct digitization IF processing module. For more complex applications, the concept is easily scaled to support multiple, coherent channels by adding additional modules, including Mercury’s CLK3001 clock generation and distribution card (see Figure 3). 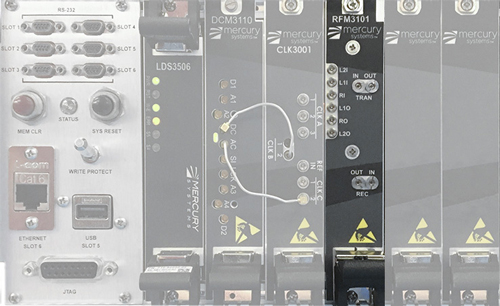 This modular approach enables rapid system design through the use of commercial off-the-shelf (COTS) technology, and it also supports easy upgrades. This benefit is critical for the EW systems depending on broadband microwave transceivers. As advanced technology becomes available on the global stage, EW systems face new threats. To respond, next-generation EW systems must offer high performance while enabling modular upgrades with the latest technology. Through the adoption of an open architecture such as OpenVPX, EW systems can be updated quickly and at minimal cost. As the demands faced by next-generation EW systems continue to evolve, more system designers are turning to transceivers compliant with open architecture, like the RFM3101, which offer the flexibility and upgradability to support current system needs while preparing for the future.