We use cookies to provide you with a better experience. By continuing to browse the site you are agreeing to our use of cookies in accordance with our Privacy Policy.
×
Home » Why Vpeak is the Most Critical Aperture Tuner Parameter

Why Vpeak is the Most Critical Aperture Tuner Parameter

There are multiple factors that designers of RF front-ends face. One of the most challenging is tuning an antenna for best performance. Good antenna design combined with aperture tuning enable wider bandwidth, increased data rates, lower power, longer battery life, smaller footprint and reduced bill of material cost. In this article, we discuss Vpeak, or voltage handling, one of the most important antenna tuner parameters when choosing the right solution for antenna aperture tuning.

Important definitions, specifications and other aspects to be considered in the design and selection of an antenna tuner include:

Aperture tuning changes the electrical length of an antenna to shift its resonance to the desired frequency band. Antenna aperture tuners improve the TRP and TIS by increasing the effective size of an antenna or by altering its radiation pattern. Impedance tuning aims to match the impedance of the antenna to the impedance of the RF front-end to optimize the power transfer to the antenna. Successful matching improves TRP and TIS. 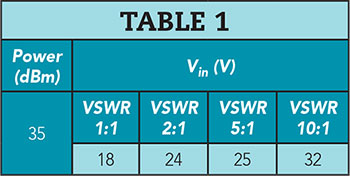 An antenna tuner may be thought of as a resonant circuit. The peak voltage inside a matching or resonant circuit can be much higher than at its input or output. This occurs because the internal impedance can be higher than 50 Ω, even if the input and output of the matching circuit are matched to 50 Ω. An aperture tuner is typically placed near the antenna, where the impedance is generally higher than 50 Ω. The peak voltage on a tuning component depends on the input power level, the antenna or matching circuit topology and the loaded Q of the circuit. For example, at Pin = +35 dBm, the peak voltage across a shunt capacitor inside a matching circuit can be as high as 32 V (see Figure 1) and depends on the VSWR (see Table 1).

Aperture tuning consists of placing a tuning element in an appropriate location of the radiating structure, a location not directly connected to the matching circuit of the antenna feed. This guarantees the highest antenna radiated efficiency and prevents the feed point impedance from changing during operation over the frequency spectrum. The Vpeak required of an antenna tuner is determined by where the tuner is placed along the antenna and its proximity to the antenna’s shorting pin (see Figure 2); Vpeak is lower closer to the shorting pin and higher further from the shorting pin. Aperture tunability is most effective when the tuning element is placed in a location with the highest voltage distribution. Due to these factors, the maximum voltage present across an aperture tuner may be much higher than the voltage present at the antenna feed point. 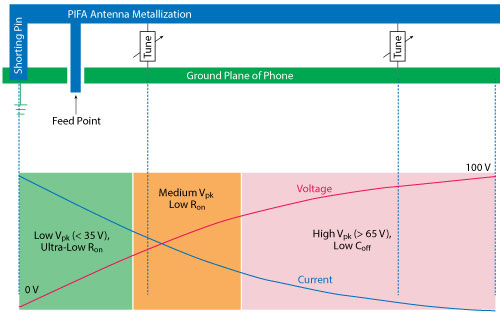 Figure 2 Effect of the tuning element location on Vpeak.

There are several considerations when selecting the appropriate aperture tuner. While Ron, Coff and Vpeak are all critical parameters, the first step is determining the Vpeak requirement. Tuning devices are used to set the resonant frequency and, as such, typically experience the highest voltage or highest current in the circuit. When Vpeak is exceeded, the tuner begins a breakdown cycle, linearity deteriorates and the tuning switch emits potentially harmful harmonics. Selecting a tuner with insufficient Vpeak will likely result in poor TRP and a failed radiated spurious emissions (RSE) certification.

Vpeak cannot be measured on an antenna, because the act of measuring and touching the antenna changes its RF characteristics. The Vpeak expected across the antenna tuner must, therefore, be simulated. Once defined, Ron and Coff are selected to achieve the TRP goal. This is also done through simulation. Depending on the specific antenna design and tuning bands, either Ron or Coff may have more influence on antenna efficiency. 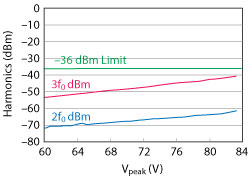 The RF semiconductor industry has not converged on a common method for testing and specifying Vpeak. Some suppliers simply specify a value in the absolute maximum ratings table of the data sheet. This is sufficient for describing the voltage beyond which the part may be damaged, but it does not guarantee that the part will perform adequately and not fail system-level RSE testing. Other suppliers may include a Vpeak value in the electrical specifications table but do not indicate what level of performance is guaranteed. Designers must be certain sufficient performance is guaranteed when using a tuning device anywhere up to its Vpeak level. The consequence of using a tuner above Vpeak is that harmonics are injected into the system, which could result in excessive RSE and/or antenna efficiency to be lower than expected.

Skyworks uses harmonic performance to specify Vpeak. Input power is swept and the second and third harmonics are measured. Vpeak on a Skyworks data sheet identifies the point where harmonics exceed ‐36 dBm, a level chosen to comply with the “3GPP Spurious Emissions Requirement” (Section 9.2). Spurious emissions are caused by unwanted transmitter effects such as harmonics, parasitics, intermodulation and frequency conversion, but they exclude out-of-band emissions. As one example, Skyworks’ SKY19250 is a SPST antenna tuner with a rated Vpeak of 80 V. Characterization test results are shown in Figure 3. Harmonic performance is better than ‐36 dBm beyond 80 V. 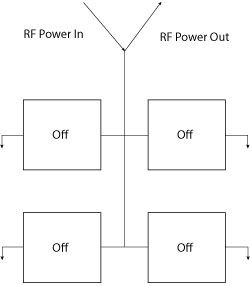 Figure 5 Vpeak is measured in the shunt configuration with all arms off.

Skyworks uses a standardized Vpeak measurement system (see Figure 4) for characterizing tuners. Peak voltage is verified by a high-power measurement in a 50 Ω environment and involves high-power levels that could destroy the device under test. To nondestructively measure Vpeak, the antenna tuner is configured in a shunt configuration with all arms safely in the “off” state (see Figure 5).

It is important to choose the correct aperture tuner component that meets Ron, Coff and Vpeak criteria to match the antenna design. Antenna tuner Vpeak is critical to the performance of the RF system. Using an antenna tuner with inadequate Vpeak may result in poor TRP, TIS and certification failure. Simply relying on the Vpeak in the absolute maximum ratings table of a data sheet is not sufficient. Harmonics are the best indicator of true Vpeak performance and should be defined in the data sheet electrical specifications for Vpeak. A well-calibrated Vpeak measurement system must be used in order to safely and reliably test and select appropriate antenna tuner components.