We use cookies to provide you with a better experience. By continuing to browse the site you are agreeing to our use of cookies in accordance with our Privacy Policy.
Home » Digital Equalization of mmWave Analog Frequency Up and Down-converters
MTT-S IMS

Digital Equalization of mmWave Analog Frequency Up and Down-converters 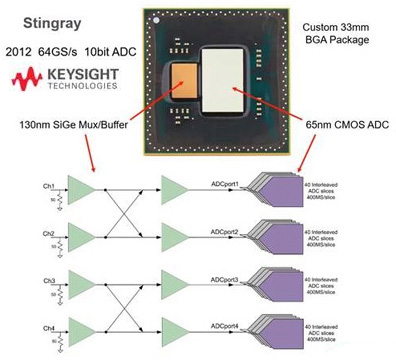 It is a known fact that time interleaving of Analog-to-Digital Converters (ADC) is used to increase sampling rate of modern high-performance digitizers. A recent high performance example is the 10-bit digitizers from Guzik Technical Enterprises (GTE) that feature Keysight Technologies ADC Integrated Circuit (IC) where 160 individual ADC are interleaved to achieve sampling at up to 64 Gsa/s (160 “slices” sampling at 400 Msa/s) forming two analog channels at 32 Gsa/s each. Time interleaving that large number of ADCs makes it challenging to achieve high Spurious-Free Dynamic Range (SFDR). Patented digital equalization technology[i] is used to reduce mismatch between slices, non-flatness of Frequency Response (FR) and Group Delay (GD)[ii] of the Digitizer, to create a calibrated baseband receiver in DC to 10 GHz band with input signal range from

The simplified block diagram of measurements is shown on Figure 1. 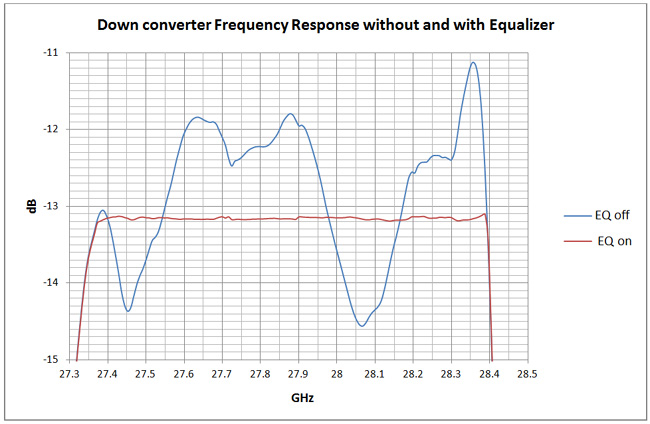 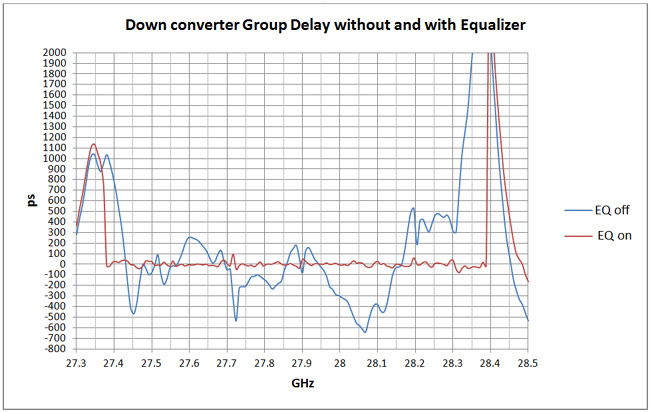 Below the FR and GD temperature stability of the Down-converter is plotted. The deviation from equalized FR and GD are shown on Figures 4 and 5, respectively. 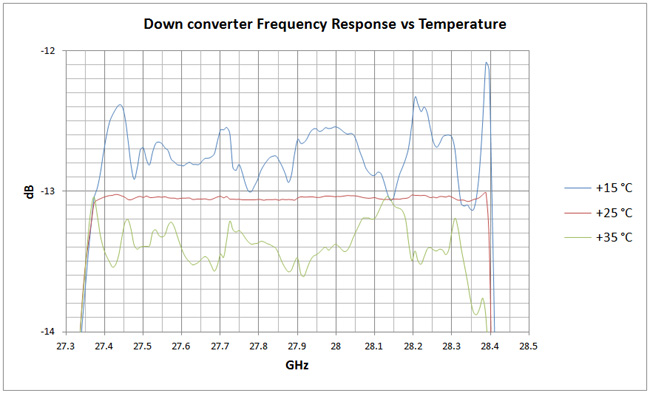 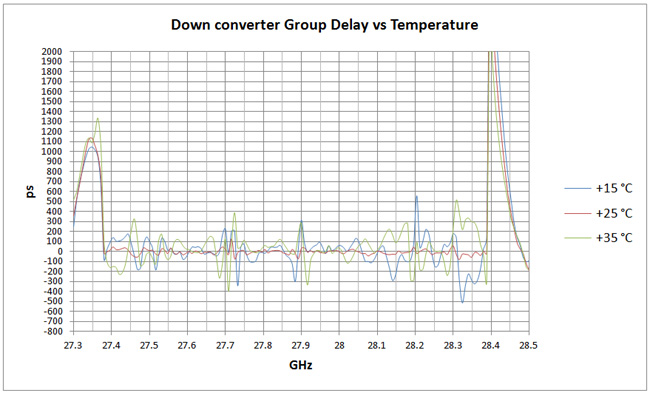 A Vector Signal Generator (VSG) with low enough base Error Vector magnitude (EVM) in 28 GHz frequency range could not be identified on the market that would make it impossible to measure EVM of the down-converter before and after equalization. For that reason, the calibration plane was moved to the IF input of the up-converter.

The simplified block diagram of measurements is shown on Figure 6. 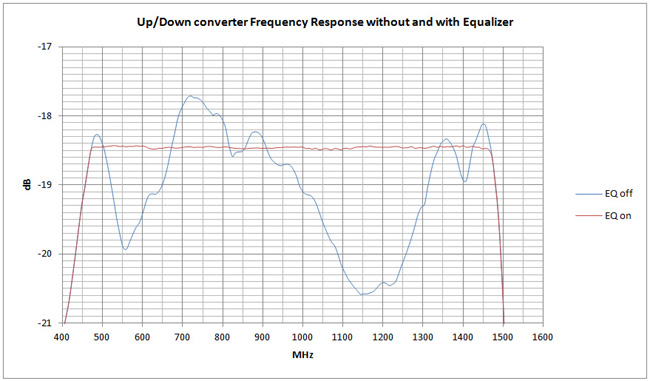 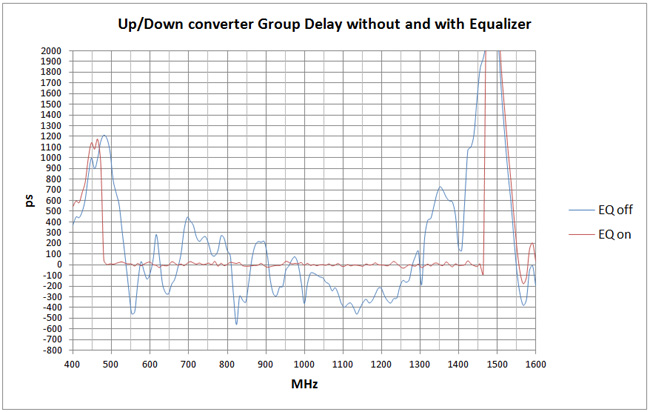 Figures 9 and 10 show how the equalized FR and GD responses are changing with different equalizer number of taps. 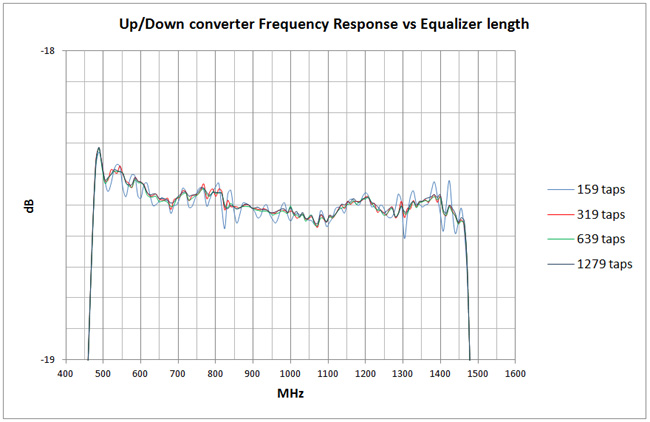 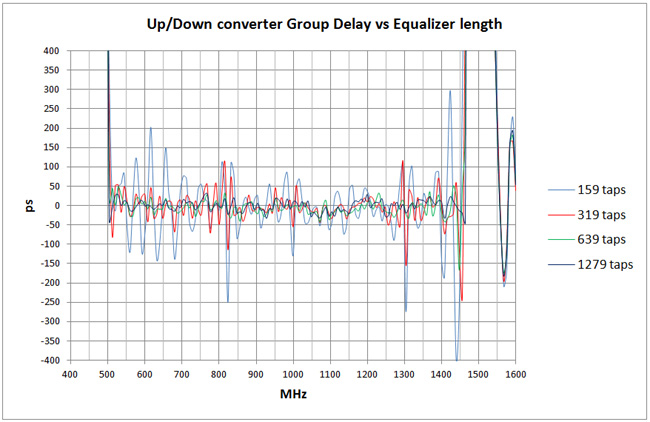 Figures 11 and 12 show the deviation of equalized FR and GD of up/down converters for different temperatures. 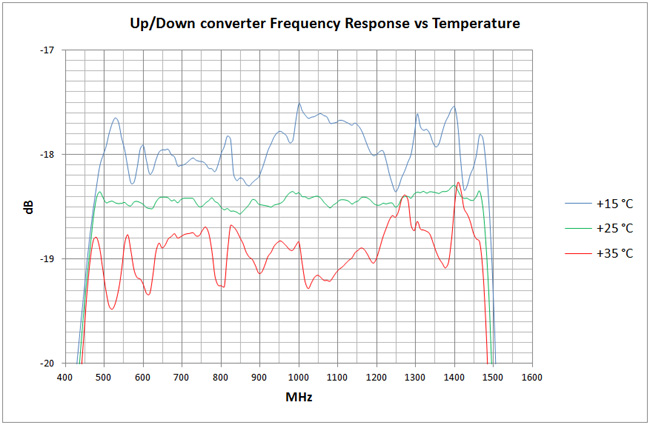 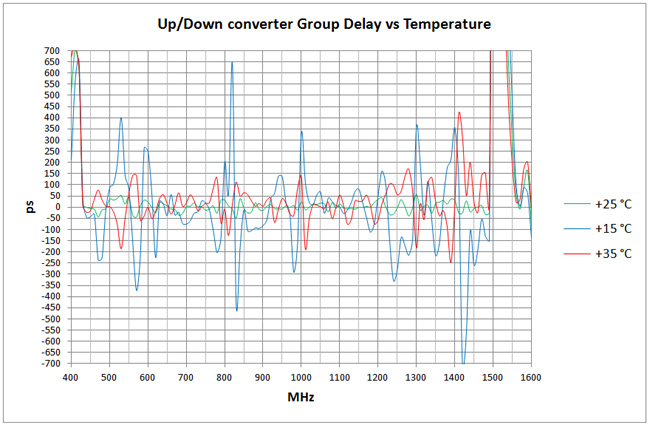 The results of the EVM measurements for 16QAM and 64QAM, 625 Msymbol/s modulated signal with Root-Raised-Cosine (RRC) filter roll-off factor of 0.35 for transmit and measurement without and with FR and GD equalization are shown on Figures 13-16 (using Keysight Technologies VSA 89600 Software). Before equalization, EVM is ~11% and after the equalization is ~1% for 16QAM. For 64QAM measured EVM is 8.79% before equalization and ~1% after equalization. The measurements of EVM for different equalizer taps shows that even for 159 taps equalizer EVM is ~1%. Longer equalizer might be needed for wider band up and down-converters. 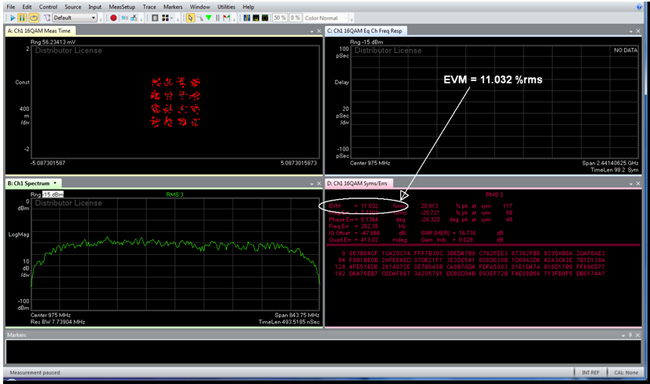 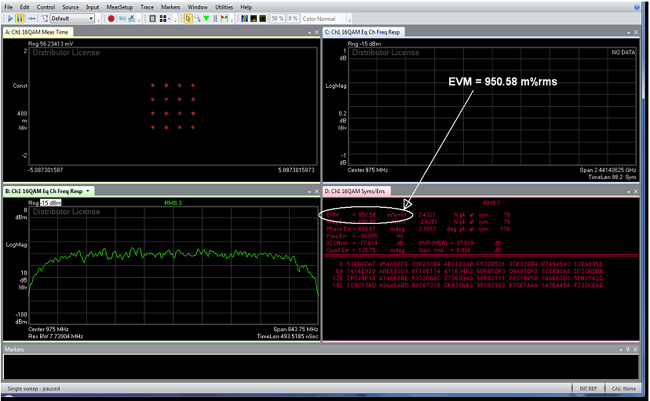 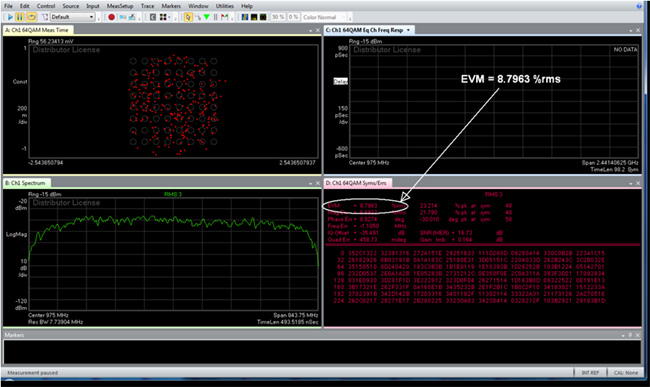 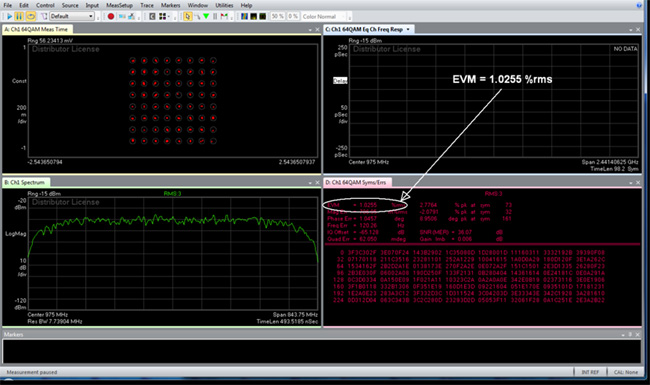 Figure 17 shows how EVM changes over temperature for the up and down-converters from ambient calibration temperature +25 °C. 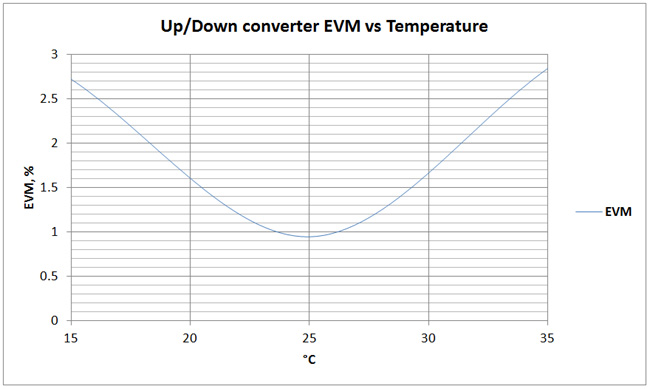 The digital equalization technology based on FR and GD measurements of up and down-converters allows for significant reduction in the linear distortions of the test system.

The combination of down-converters and the digitizer with equalizer can be used to create a reference calibration RF reference plane; thus forming a calibrated reference receiver in mmWave bands up to 30 GHz with known FR and GD response. It should be noted that temperature stabilization should be added to the analog up/down-converters to achieve repeatability and high accuracy.

The equalization can be done in the hardware inside the FPGA-based Digital Processor (Guzik ADP7000 Series Digitizer) in real-time for signals with bandwidth up to 2.5 GHz using the patented[iii] Digital Downconverter (DDC). Up-converter (WR28CCU) and down-converter (WR28CCD) were provided by Virginia Diodes, Inc. for experiment and demonstration purposes of the technology.

[i] US Patent 7,408,495 Digital Equalization of multiple interleaved Analog-to-Digital converters

[iii] US Patent 9,634,679 Digital Down Converter with Equalization