We use cookies to provide you with a better experience. By continuing to browse the site you are agreeing to our use of cookies in accordance with our Privacy Policy.
Home » Rohde & Schwarz Supports ESA JUICE Expedition
Aerospace and Defense Channel European Industry News Industry News Test and Measurement Channel

The Jupiter Icy Moons Explorer (JUICE) is scheduled to blast off for a journey of nearly 800 million kilometers to Jupiter in 2022. But before the launch can take place, the space probe's radar antennas have to be flight tested. Rohde & Schwarz provided two R&S ESR EMI test receivers to support this test.

Led by Airbus, JUICE is a European Space Agency (ESA) deep space mission to study the icy moons of Jupiter. The objectives are to explore the atmosphere and magnetosphere of the moons and investigate whether there are liquid oceans suitable for habitation under the thick icy crusts of moon Ganymede.

The radar for icy moons exploration (RIME) antenna will play a key role in the expedition. It is designed for the frequency range from 7.5 MHz to 10.5 MHz. This low frequency is needed to penetrate the surface of Jupiter's moons up to 9 km deep. The RIME antenna was recently subjected to a series of tests to verify its simulation data and measure its radiation pattern under conditions similar to those on board the probe. 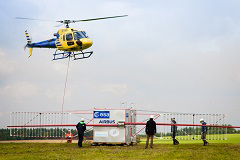 Rohde & Schwarz provided two R&S ESR EMI test receivers to measure the antenna's radiation pattern during these tests. Uwe Körber of the Test and Measurement Division's sales team at Rohde & Schwarz explained, "When we analyzed the measurement task, it quickly became clear that a basic spectrum analyzer wouldn't deliver the required performance and we needed to bring in a realtime spectrum analyzer. Due to the unknown environmental conditions of the measurements, we decided to use two R&S ESR analyzers because they have an additional preselection feature."

The tests were carried out at an airfield near the Airbus facility in Friedrichshafen, Germany, where the test crew assessed the RIME instrument's 16.6 m antenna in various flight configurations. A helicopter lifted a mock up of the space probe up to 320 m in the air. The mock-up housed the transmitter, while the two test receivers, each with an RF receive antenna, remained on the ground. The helicopter flew the mock up around the two receiving stations to collect the data needed to calculate the antenna's radiation pattern. Rohde & Schwarz provided the ESA with the measured raw data.