We use cookies to provide you with a better experience. By continuing to browse the site you are agreeing to our use of cookies in accordance with our Privacy Policy.
×
Stay Connected :
Home » 3D Additive Manufacturing Meets the Microwave Industry 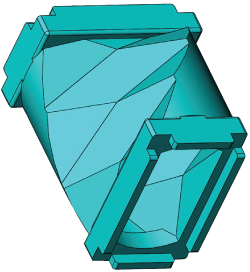 Figure 1 With the MJM method, a 3D printer fabricates waveguide components, such as waveguide tees, by printing with two different materials, one layer at a time.

Three-dimensional (3D) printing provides a means of producing RF/microwave passive components and component parts as an alternative approach to traditional “subtractive” manufacturing methods, in which materials are trimmed down to a desired shape or form. 3D printers work with different materials to create parts layer by layer, under the guidance of a computer and a computer-aided design (CAD) file. While 3D printing is still improving in choice and quality of materials, it has already shown its value in the creation of challenging prototypes and limited production runs where fast turnaround times are needed.

Additive manufacturing (AM), also known as 3D printing, is a computer-assisted method of producing passive RF/microwave components. It is a departure from traditional subtractive methods, in which parts are formed by removing materials using processes such as drilling and milling. With AM, 3D components are created by adding materials using printers under computer control, adding layer upon layer of different materials to form the final product. AM methods provide precision and repeatability not often achieved with subtractive manufacturing processes.

In the manner that a two-dimensional (2D) printer can generate a physical representation of a computer document file, a 3D printer can manufacture a physical part from a CAD file. For passive RF/microwave components such as waveguide tees, in which dimensional tolerances must be met for acceptable electrical performance, computer simulation programs predict the performance based on mechanical dimensions, construction materials and other inputs. A 3D printer makes it possible to generate physical components using the same dimensions, achieving performance levels that are typically within ±1 percent of the simulated parameters. Files for driving a 3D printer as part of an AM process can be produced through synthesis, using a CAD program, or by making a 3D digital copy of an existing component, using a 3D scanner. The instructions for creating a part with a 3D printer can also be stored as an additive manufacturing file (ADF).

Figure 2 Two different materials used in the MJM process: build wax and support wax. The support wax is removed in a hot bath.

Demand is growing for passive components at mmWave frequencies, driven by the use of frequencies through 80 GHz for applications such as automotive safety systems and 5G wireless communications networks. Waveguide components for these higher frequencies require precise mechanical construction with dimensions held to tight tolerances. AM processes provide the means to fabricate prototypes and small production runs with highly repeatable performance.

AM production can be likened to the creation of a circuit laminate by adding metal films to dielectric layers, except that AM processes rely on different types of printers to create the material layers, using powders or other starting material formats. Various AM processes have been used to manufacture RF/microwave components, including stereolithography (SL), laser sintering, multijet modeling (MJM) and laser beam melting (LBM). For several years, MJM and LBM have been used successfully at Microwave Development Laboratories (MDL) to produce custom prototypes and small production runs of RF/microwave waveguide components. 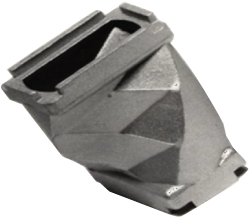 The MJM AM method has proven to be an effective technique for producing repeatable and low loss E-plane and H-plane waveguide tees at microwave and mmWave frequencies (see Figure 1). The MJM printer prints two different materials, one layer at a time, and then uses a very accurate knife to shave each layer flat. Two types of wax are used as the materials: a build wax, which forms the desired part, and a support wax, which helps maintain the shape of the desired part. The support wax is later dissolved in a hot bath to remove it from the part formed by the build wax (see Figure 2). Within the 3D printer, the two waxes are heated and flowed through nanojets to form the support and build structures. These liquefied waxes, typically acrylic photopolymer materials, are then immediately hardened and cured with ultraviolet (UV) light. The support wax has a lower melting temperature than the build wax, allowing it to be removed in a hot bath, at a temperature that will not affect the build wax.

With the MJM method, the waxes formed in the printer are sent to a metal foundry for casting in metal—typically aluminum—to produce the actual waveguide components, using a technique named the “lost wax” process, since both of the waxes used to create such fine-featured components disappear in the process of forming the metal parts. The lost wax process is essentially an investment casting technique where the remaining wax serves as a mold for metal injected into, forming the cast metal parts. The MJM method and the lost wax technique enable metal parts to be formed to a tolerance of ±0.002 in or better. Working closely with the foundry or having an internal capability helps maintain the necessary quality control for the parts produced with the MJM process. MDL owns its own metal-working foundry and can fabricate precision metal parts from aluminum, beryllium and other metals. 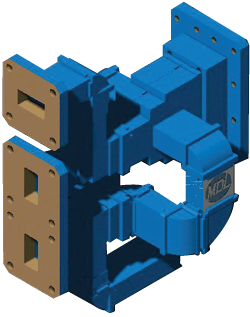 The MJM method is capable of producing high definition waveguide components for applications well into the mmWave range. It is particularly useful for building components that may be at the limits of what a CAD program can define, such as experimental and highly custom components. As an example, standard waveguide components are defined by their frequency ranges, such as WR42 rectangular waveguide, which covers 18 to
26.5 GHz. Normally, a broadband application such as 18 to 40 GHz would require two waveguide sizes: WR42 and WR28, the latter covering 26.5 to 40 GHz. However, if a computer design and simulation program can create the models for a custom waveguide component that covers both bands, the MJM method can turn those wax results into a custom metal waveguide.

For most 3D printing techniques, the dimensional limits on parts produced by the printer are not how small they can be but how large—no larger than the working area of the printer. The real limit on the performance levels that can be achieved with AM methods such as MJM is not in a manufacturing process based on a 3D printer, but on the materials used for the manufacturing process. The build and support waxes can be formed and held to extremely tight tolerances, and these tolerances are then translated to the foundry, which is tasked with matching those dimensions in metal. It is the surface roughness of the metals, such as aluminum or stainless steel, used to cast the metal parts that contributes significantly to the performance of a 3D printed component, such as a waveguide tee or bend. Excessive surface roughness results in insertion loss and VSWR higher than modeled with the CAD tools. For amplitude and phase sensitive applications such as radar, surface roughness can also cause amplitude and phase variations higher than predicted. Metal surface roughness is one of the major factors in performance discrepancies between the simulated and measured performance for AM-produced components. 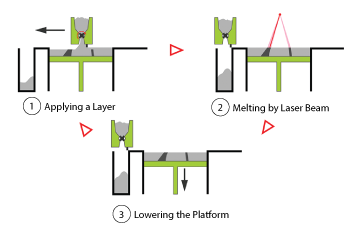 In addition to E-plane and H-plane waveguide tees, the MJM AM method has produced waveguide twists with extremely low VSWR (see Figure 3) and components such as monopulse comparators for an antenna feed network, where tight phase and amplitude control are required (see Figure 4). Since monopulse comparators are typically designed and built to meet specific polarization requirements, such as for horizontal, vertical or circular polarization, use of the MJM AM method makes it possible to work with an optimized CAD file to quickly produce a design prototype meeting a customer’s requirements.

LBM is the second AM process used by MDL for producing high frequency components. The design process of both approaches is similar, working with 3D CAD data and a 3D printer to build a part or component one layer at a time. But the LBM process works with a different type of printer, a more complex and expensive 3D printer that works directly with metal, rather than wax, to form prototype components or small production runs. In LBM, a precision laser in the 3D printer is focused on the powdered form of a metal, heating the metal particles to selectively build up thin metal layers. Once a single layer is completed, the printer’s base plate is lowered to provide the spacing required for the next metal layer. The process is repeated, building layer upon layer, until a part is complete (see Figure 5). 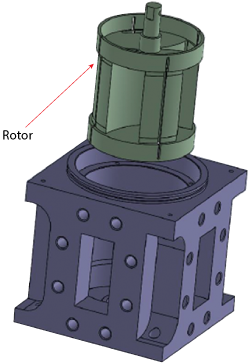 An LBM 3D printer is a significant investment compared to an MJM 3D printer—more than $500,000 compared to about $50,000. Because of this, MDL works with an outside supplier for LBM-produced components. The LBM process has been developed for specific materials that can be processed in powdered form in a 3D printer. For MDL’s supplier, these materials include various forms of aluminum, stainless steel, cobalt chrome, copper alloy and titanium. However, they do not yet include a “brazeable” aluminum, the material formed using the MDM 3D printer and MDL’s internal foundry.

Components manufactured by the LBM process can be created from a CAD file in the shortest time, for rapid assembly of a prototype. LBM-manufactured components can be welded and reworked using standard machining and processing methods, including milling and drilling, to enhance dimensional tolerances when necessary. Because of the extremely tight tolerances with LBM 3D printing methods, this AM approach is used for components where the dimensional tolerances are critical, such as rotors for waveguide switches (see Figure 6).

Rotary waveguide switches produced with the LBM method have delivered excellent reliability with long operating lifetimes, such as the 3.95 to 5.85 GHz WR187 rotary switch shown in Figure 7. Over this frequency range, the switch has almost negligible insertion loss, 0.10 dB maximum, and maximum VSWR of 1.10:1. The isolation of this switch is 60 dB minimum and it has an RF power rating of 1400 kW. The rotors for waveguide switches such as these, produced by the LBM process, have been laboratory tested for more than 10 million switching operations with minimal degradation in electrical performance. 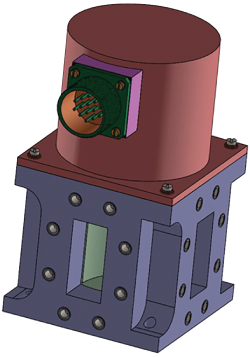 Because 3D printing creates components by building multiple layers of materials, one might wonder if such a process is capable of producing components and parts with isotropic properties. It has been found that material consistency is a function of the choice of AM process. For the LBM process, the metals (mostly aluminum) produced by the 3D printer are consistent in the x, y and z axes, and the LBM layering has been found to produce metal parts with durability and consistency. Because a single part can be fabricated from multiple metal alloys, 3D printing allows material characteristics to be tailored for specific performance requirements in a way not possible with metal casting.

Work continues on improving 3D printers and, especially, on the materials used in AM, since the choice of technique depends on the available materials. Experience at MDL has shown the use of an AM approach such as MJM can eliminate the expenses associated with casting tools, as well as the lead times to build tooling for a particular component. The performance levels of the components manufactured by both the MJM and LBM processes speak well for both processes for RF/microwave component manufacturing.