We use cookies to provide you with a better experience. By continuing to browse the site you are agreeing to our use of cookies in accordance with our Privacy Policy.
Home » Compact USB-Controlled Synthesizers for Lab and Field

Since it was introduced in the 1990s, the Universal Serial Bus (USB) has become the defacto interface for almost every type of device, relegating the bulky 36-pin Centronics parallel bus and RS-232 serial bus to the back stage. In the last few years, the list of applications has extended to another domain: RF and microwave instruments, such as frequency synthesizers. Although synthesizers powered and controlled by USB and a computer do not have the performance or full array of features of benchtop instruments, they are not intended to—instead providing basic functions that, in many cases, are all that is required. They also cost a fraction of the price, are basically plug-and-play, take up virtually no space and require only a computer and software.

Pasternack Enterprises has introduced a family of USB 2.0-based synthesizers that collectively cover frequencies from 25 MHz to 27 GHz. Their most likely use is in the lab or on the desktop, sometimes in combination with other instruments for testing during the design and prototype phases of development. However, their compact design makes them usable virtually anywhere, including measurements in the field. In addition to providing the measurement interface, a laptop computer powers them, so a basic frequency generation setup can fit comfortably in a laptop bag. Each unit is supplied with a USB cable and a coaxial cable with a female SMA connector on one end and a male MMCX connector on the other.

There are six models in the PE11S390X series, beginning with the PE11S3900, which covers 35 MHz to 4.4 GHz. At the high end, the PE11S3905 covers 24 to 27 GHz. The phase noise of the various models, at 100 kHz offset, ranges from -103 dBc/Hz at 4.4 GHz to -75 dBc at 27 GHz. The RF output power can be adjusted in 1 dB steps from -20 to +18 dBm. The synthesizers operate from an internal 50 MHz clock, although an external reference from 10 to 70 MHz can be used. An external reference is supplied via the MMCX connector on the cable, the other end connecting to the synthesizer. The MMCX connector also allows the unit to be synchronized with other test equipment. LEDs on each synthesizer confirm the USB connection, PLL lock and RF output power. Non-volatile memory in the synthesizer saves the last setup for future use. The synthesizers can be controlled via Windows, Mac or Linux platforms. The units are designed to operate from 0°C to +55°C.

The PE11S390X series is virtual instrument software architecture (VISA) compliant, requiring only a VISA library installed on the computer. VISA is a standardized test and measurement API that acts as an interface between an instrument and various communication buses, such as USB, GPIB and PCI/PCIe. The library can be obtained from National Instruments, Keysight Technologies, Tektronix and other test equipment manufacturers. The synthesizers automatically configure as a USB test and measurement class (USBTMC) device, which allows GPIB-like communication over USB with no need for additional drivers. The synthesizers are also compliant with standard commands for programmable instrumentation (SCPI), the common interface language between computers and test instruments. VISA, USBTMC and SCPI make it possible for the PE11S390X series to communicate with almost any instrument, as well as test application environments within MATLAB. 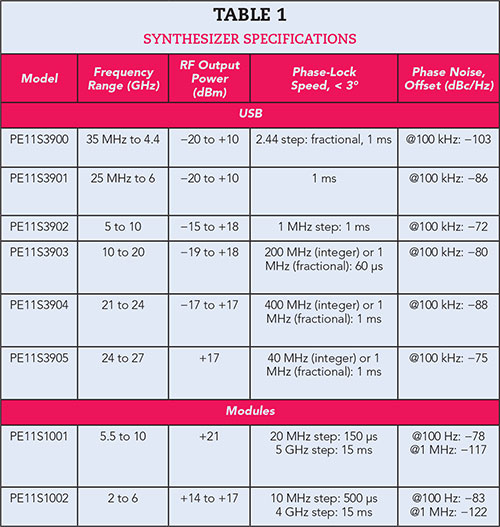 In addition to the USB synthesizers, Pasternack has introduced two broadband synthesizer modules in its PE11S series (see Figure 1), with frequency ranges of 2 to 6 GHz and 5.5 to 10 GHz. Output power is between 14 and 17 dBm for the 2 to 6 GHz synthesizer, and 21 dBm for the 5.5 to 10 GHz module. The two modules are well-suited for defense and commercial applications. They integrate SiGe, GaAs PHEMT or InGaP HBT MMICs with low noise voltage regulators and an output buffer amplifier in a hermetic package measuring 1.4 in × 0.75 in × 0.35 in. The PE11S series can operate in either integer or fractional N modes. A step size of only 0.6 or 1.2 Hz can be achieved in fractional N mode, depending on the model. Both use an external clock reference of 10 MHz and operate from a +3.3 V bias.

Specifications for the USB-based synthesizers and synthesizer modules are summarized in Table 1.