We use cookies to provide you with a better experience. By continuing to browse the site you are agreeing to our use of cookies in accordance with our Privacy Policy.
×
Home » Entry-Level Oscilloscope Offers Power, Performance and Flexibility
Test and Measurement Channel 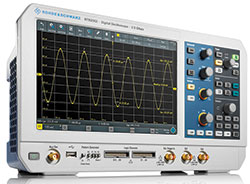 Claimed to be the first low cost oscilloscope to offer touch screen operation as well as a 10-bit vertical resolution, the entry-level R&S RTB2000 is designed for education, R&D and manufacturing applications. The series comes in two and four channel models and offers bandwidths of 70, 100, 200 and 300 MHz. The instrument offers the “power of 10” by providing a 10-bit analog-to-digital converter (ADC), 10 Msample memory and 10.1" capacitive touch screen.

Oscilloscopes measure voltage versus time. The ADC (shown in Figure 1) determines how well the oscilloscope can resolve the amplitude of measured signals. In the past oscilloscopes have predominantly offered eight bits of vertical resolution, which allows a signal to be mapped to one of 256 vertical positions. The R&S RTB2000 includes a proprietary 10-bit ADC with 1024 vertical positions—a four-fold improvement compared to a conventional 8 bit ADC. 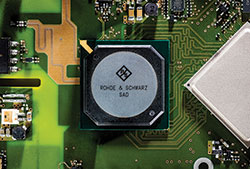 The increased resolution enables users to make more precise measurements and can be particularly useful for detecting small signals in the presence of large-amplitude signals. One example is the characterization of switched-mode power supplies. The voltages across the switching device must be determined precisely throughout the switching process within the same acquisition.

The accuracy of measurements on a signal also depends on the oscilloscope’s inherent noise. The R&S RTB2000 precisely measures even at the smallest vertical resolution by using low-noise front-ends and state-of-the-art ADC.

After bandwidth and sample rate, memory depth is the most important attribute that determines an oscilloscope’s ability to handle a large range of troubleshooting tasks. The R&S RTB2000 oscilloscopes feature a 10 Msample acquisition memory on each oscilloscope channel, and 20 Msample per channel in interleaved mode. Users benefit from high sampling rates for longer time captures for testing and troubleshooting, which provides additional insight into electronic devices.

This large standard memory also has the option to  further extend to 160 Msample of segmented memory. The R&S RTB-K15 option with deep, segmented memory analyzes signal sequences over a long observation period. For example, protocol-based signals with communications gaps such as I2C or SPI can be captured over several seconds or minutes. Thanks to the variable segment size from 10 ksample to 10 Msample, the 160 Msample memory is optimally utilized; more than 13,000 cohesive individual recordings are possible.

Today, touch operation has become commonplace in work and personal environments. Consequently, capacitive touch is also becoming more important for oscilloscope users as it allows them to operate the instrument more quickly and efficiently. With the R&S RTB2000, for the first time, users with lower budgets have access to not only touch screen but capacitive touch screen operation with a large display. The oscilloscope delivers a 1280 × 800 pixel 10.1" capacitive touch screen to quickly navigate in pop-up menus and a touch function to easily adjust scaling, to zoom in or to move a waveform – just like on a smartphone.

Dedicated operating modes for frequency analysis, mask tests and long data acquisitions are also integrated. Debugging all kinds of electronic systems is easy and efficient and satisfies the all-important rule of investment protection. The following outlines these features.

Logic Analyzer —  The R&S RTB-B1 option turns every R&S RTB2000 into an intuitive-to-use MSO with 16 additional digital channels. The oscilloscope captures and analyzes signals from analog and digital components of an embedded design—synchronously and time correlated to each other. For example, the delay between input and output of an ADC can conveniently be determined using the cursor measurements.

Protocol Analyzer — Protocols such as I²C, SPI and CAN/LIN are among the most commonly used to transfer control messages between integrated circuits. The R&S RTB2000 has versatile options for protocol-specific triggering and decoding of serial interfaces. Selective acquisition and analysis of relevant events and data is possible. With the hardware-based implementation, smooth operation and a high update rate is ensured even for long acquisitions. This is advantageous, for example, to capture multiple packetized serial bus signals. 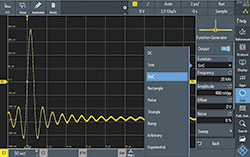 Figure 2 The built-in generator offers many commonly used functions, as well as the possibility to reproduce arbitrary waveforms.

Waveform and Pattern Generator — The integrated R&S RTB-B6 waveform and pattern generator up to 50 Mbit/s is useful for educational purposes and for implementing prototype hardware. Apart from the common sine, square/pulse, ramp and noise waveforms, it outputs arbitrary waveforms and 4-bit signal patterns. Waveforms and patterns can be imported as CSV files or copied from oscilloscope waveforms. Before playing signals back, the user can preview them to quickly check signal correctness. Predefined patterns for e.g., I²C, SPI, UART and CAN/LIN can be used (shown in Figure 2).

Digital Voltmeter — The oscilloscopes feature a three-digit voltmeter (DVM) and six-digit frequency counter on each channel for simultaneous measurements. Measurement functions include DC, AC+DCRMS and ACRMS—included in scope of delivery.

Frequency Analysis Mode — Difficult-to-find faults often result from the interaction between time and frequency signals. The FFT function is activated with the push of a button and by just entering center frequency and span. Due to this high-performance FFT signals can be analyzed with up to 128 kpoints. Other practical tools include cursor measurements and autoset in the frequency domain.

Mask Test Mode — Mask tests quickly reveal whether a specific signal lies within defined tolerance limits. By using statistical pass/fail evaluation, they assess quality and stability of a device under test. Signal anomalies and unexpected results are quickly identified. When the mask is violated, the measurement stops. Each violation can generate a pulse output at the AUX-OUT connector and this pulse output can be used to trigger actions in the measurement setup. 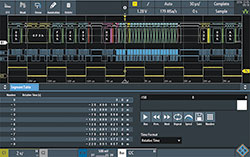 History and Segmented Memory Mode — The R&S RTB-K15 history function option increases the memory from 10 Msample to 160 Msample. Users scroll through past acquisitions and analyze the data using all of the oscilloscope tools, e.g., protocol decode and logic channels. Serial protocol and pulse sequences are recorded practically without interruptions (shown in Figure 3).

The R&S RTB2000 oscilloscopes flexibly adapt to needed project updates by installing software licenses. This applies, for example, to triggering and decoding of serial protocols and the history and segmented memory mode. The waveform and pattern generator and the MSO capabilities are built-in and just need to be activated. Also, via keycode, the bandwidth can be upgraded up to 300 MHz, which makes retrofitting easy.

To facilitate global use the oscilloscope’s user interface and online help support 13 languages—English, German, French, Spanish, Italian, Portuguese, Czech, Polish, Russian, simplified and traditional Chinese, Korean and Japanese. Users can change the language in just a few seconds while the instrument is running.