We use cookies to provide you with a better experience. By continuing to browse the site you are agreeing to our use of cookies in accordance with our Privacy Policy.
Home » Making Connections – Collaborating to Develop the NEX10 Interface
Broadband Channel Cellular 4G/LTE Channel

RF coaxial cables and connectors are vital components providing the critical link without which the latest state-of-the-art technology could not function. As the telecommunications industry moves towards smaller equipment and a small cell approach to facilitate higher data speeds, the radios and antennas become smaller, resulting in the need for a small, high performing coaxial RF connector. Here, Microwave Journal discovers how three leading developers and manufacturers of RF and fiber optic (FO) connectors came together to address the issue and develop the NEX10™ connector interface. This article offers insight into how the companies conceived the new product, collaborated to pool expertise and resources, and managed communication and the division of tasks.

The appetite for mobile data is ravenous with consumption increasing rapidly across the globe and data speeds expected to further increase with deployments of modern day 4G and the upcoming 5G in the not too distant future. In order to meet these higher data rates, the mobile communications industry is moving mobile radio equipment ‘closer to the end user’ in order to achieve better coverage. Consequently the desired coverage needs to be delivered by smaller equipment which is light-weight, less obtrusive and can be installed easily at street level, for example on light poles. From the radio and antenna perspective, this requires the development of equipment that is smaller in size and lighter in weight but with the capacity to offer high performance and data speeds up to 1 Gbps.

Critical to the communications channel is the link between remote radio and antennas, which is accomplished by a low loss RF cable. The drawback with using the existing RF connectors that are on the market is that they are either too big or don’t meet the electrical requirements of modern day 4G and upcoming 5G mobile networks. For example, the 4.3-10 connector, which has excellent RF performance and is now being commonly used as a standard connector for antennas and remote radio head applications cannot meet the compact size requirement necessary for small cells. On the other hand, smaller RF connectors such as QMA or SMA do not exhibit the required electrical and mechanical requirements such as Passive Intermodulation (PIM) or have the robustness for outdoor use.

Therefore, there is a need for a connector tailored specifically to be installed on radios and antennas with a small pitch, providing high electrical performance in terms of PIM, RL and RF power that is robust and compact with a maximum flange height of 12.7 mm.

Such a challenge requires confidence, knowledge, experience and expertise, which has been addressed by HUBER+SUHNER, Radiall and Rosenberger who recognized the urgent need for a new high performance RF connector and acted by collaborating to develop a brand new interface —namely, the NEX10™. These three leading connector companies are located within a few hundred kilometers of each other in Switzerland, France and Germany, respectively, and they also share common ground regarding their approach to the collaboration to develop the NEX10. Their priority was to make sure that all the requirements desired by the market were taken into consideration, together with the utilization of the latest and most advanced technologies and concepts for connector development.

Also, commercially, it was considered that through the collaboration potential customers have the confidence that the product has been developed utilizing the resources and expertise of three leading connector manufacturers, giving the users product availability from different sources and enabling them to purchase from their preferred supplier.

HUBER+SUHNER develops and produces high-quality electrical and optical connections. It operates on a global scale, yet with a local approach tailored to each market, enabling it to address customer needs for trans-technological solutions in the communication, transportation and industrial markets. The company provides a one-stop-shop for connectors, cables, cable assemblies, cable systems antennas and lightning protectors.

Radiall was founded in 1952 to make coaxial plugs for the emerging television industry. Today, it is a global manufacturer of high reliability interconnect components for numerous demanding industries including aerospace, defense, industrial, medical and telecommunications.

The Rosenberger Group has more than 7500 employees in its headquarters in Germany, manufacturing plants and sales offices in Europe and Asia as well as in North and South America. For more than half a century, its name has been synonymous with the most advanced technology, quality and creativity. The company is a leading manufacturer of high-frequency and fiber optic connector solutions, with customers including renowned high-tech companies in the cellular technology and telecommunications, data systems, medical electronics, industrial measurement technology, automotive electronics and electro-mobility fields.

With three major companies involved, each with their own structure, methods and expertise, what were the logistics and procedures for ensuring the collaboration to develop the NEX10 interface was streamlined, efficient and effective?

As might be expected, the design engineers of each company were a vital component of the consortium team. They worked independently on the different packages but shared their ideas during regular meetings between the product management/marketing and design teams, which were either face to face or web based. At every meeting each company took away actions to be explored, with progress reported at the next meeting.

The various work packages were split evenly between all parties for each step of the development process from the first design ideas and the first samples through to the final qualification tests. Individual companies did not have a specific role, but if one design team suggested a new idea/design they would follow it through, taking on board the input and views from the other teams.

The aim of the collaboration was to design a small, robust and PIM-stable connector. A look at the interfaces currently available on the market showed that achieving this combination would be a challenge. Small connectors like SMA connectors are not PIM-stable and also don’t fulfill the requirements regarding robustness which is a prerequisite for a connector that has to be installed in harsh environments. On the other hand, PIM-stable connectors like the 4.3-10 and 7-16 are robust, but are simply too large for small cell applications. 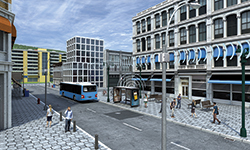 Based on each individual company’s many years of experience in connector design, the consortium indentified what design features had to be incorporated in order to achieve good PIM results. It was decided that the easiest design approach was to consider: a downscale version of one of the existing PIM stable connectors. However, it was soon agreed that an interface of this size required specific features to protect the contact elements from damage.

Importantly, the center contact on both the female and male side, as well as the slotted outer contact on the male connector, which is needed for a PIM-stable connector independent of the coupling mechanism, has to be protected. Members of the consortium work with small connectors every day and know how to handle them properly. In the final design of the NEX10 a major consideration was to deliver a foolproof design which cannot be easily damaged during installation on site.

The NEX10 interface has great potential for playing a vital role in the future road map of telecom infrastructure. It has been created primarily to address applications requiring PIM stability but in a small size, particularly for small cells (see Figure 1) and MIMO, DAS/in building, antennas, radios and filters.

In small cell applications, the interface is particularly suitable for challenging space restrictions and electrical performance requirements. In low power base stations, the NEX10 can be used for interconnections in the remote radio head as well as the interface on the antenna and on the jumpers. In multi-operator/multiband DAS, it can be used where RF signals have to be combined, terminated or distributed to the antenna.

Figure 2 Size comparison of the 4.3-10 connector and the NEX10 interface.

Several new telecommunications applications require relatively low power combined with an increase in the number of channels in the system. This is exactly where NEX10 can support the future generation of telecom applications in 4.5G and 5G. The compact interface is 50 percent smaller than the 4.3-10 connector—Figure 2 shows a comparison with the 4.3-10 connector and the NEX10—and is five times smaller than the 7/16 connector, while meeting all outdoor RF connector specifications.

A key design feature of the NEX10 is the separation of the electrical contact from the mechanical contact area, which maximizes intermodulation performance under static, dynamic, vibrations and torque stress conditions. Figure 3 shows a PIM test under dynamic conditions. The interface yields a low PIM and high RL performance independent of the coupling mechanism or applied torque. This characteristic also gives the possibility of offering the connector plug with screw, hand screw and quick lock designs, thus simplifying the installation effort while guaranteeing a very high electrical performance for all coupling mechanisms.

Additionally, the interface has been designed with an integrated weather protection rubber boot protection for extreme weather conditions. The boot, which is part of the interface, shown in Figure 4, offers IP68 protection and is tested against ice and under various temperature cycles. The interface with the rubber boot is available as a standard product for both quick-lock and screw types with a uniform sealing mechanism from all approved NEX10 suppliers.

Also, the separation of electrical and mechanical contact in the interface offers PIM stable multi-coax and blind mate solutions. The multi-coax solution (see Figure 5) is a space saver for dense applications. It consists of up to four connectors integrated in one housing and is available as a standard solution. This solution provides benefits of space reduction and installation time while providing excellent electrical performance and mechanical robustness for outdoor use. The NEX10 blind mate solution is for panel to panel and test and measurement applications.

By combining the knowhow of three leading global innovative RF connector companies, the consortium has taken advantage of the expertise and design capabilities of all partners in the design of the interface. Similarly, the companies’ expertise and experience was extended to the production processes where the latest advanced manufacturing technologies were utilized to provide a high quality RF connector which meets all the existing standards and future requirements of the telecommunications market.

Significantly too, the consortium also provides the flexibility to enable customers to source the product successfully in any part of the world to satisfy OEM or wireless operators’ needs —for example individual connectors or finished RF jumpers. The consortium believes that through close collaboration and team work, NEX10 has the potential to become the new telecom standard for the future.