We use cookies to provide you with a better experience. By continuing to browse the site you are agreeing to our use of cookies in accordance with our Privacy Policy.
×
Home » UAV/Drone Detection System

The rapid proliferation of micro/mini UAVs is a growing concern. Easy to make, cheap to buy, simple to fly, and hard to detect, commercial and non-commercial drones are one of the most quickly evolving technological threats to military and civilian interests. Military communications links often exploit techniques such as frequency agility in order to reduce the probability of interception, but the designers of UAVs are trying to field an inexpensive commercial product. As a result, UAV communications links are low-cost, unsophisticated sub-systems that have no clandestine qualities. To address this issue, Aaronia has spent four years developing the new Drone Detector, which exploits RF radiation emitted by the UAV’s onboard systems and by the operator’s control unit. Real-time RF signal detection, combined with what the company terms ‘pattern triggering,’ provides rapid warning of any UAV or UAV control unit that is operating within the area being monitored. 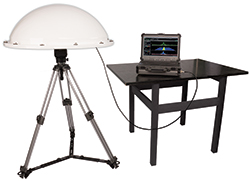 Two types of 3D direction-finding antennas are offered by the Drone Detector — the IsoLOG 3D 80 and IsoLOG 3D 160. These have eight sectors with 16 antennas, and 16 sectors with 32 antennas respectively. Both cover the 680 MHz to 6 GHz range and extenders are available should VLF (9 kHz to 680 MHz) and 6 to 20 GHz coverage be required. For field use these antennas must be teamed with either an XFR V5 PRO, shown in Figure 1, when used for portable installations, or an RF Command Centre for stationary use. For fixed remote installations or multi-unit grid installations Aaronia offers the waterproof ‘Remote BOX’. All RTSA receivers cover frequencies from 9 kHz to 20 GHz, this includes the frequencies commonly used for UAV control and video links — typically 433 MHz, 900 to 915 MHz, 1.3 GHz, 2.4 GHz and 5.8 GHz.

In its standard form, the Drone Detector has a real-time bandwidth of 80 MHz. Optionally, this can be extended to 160 or 175 MHz. Also, the standard system can be shipped without the need for an export license, but this is not the case if the customer requires a 175 MHz bandwidth unit. Using these basic components, the user can opt for systems of varying complexity. The simplest consists of a single IsoLOG 3D antenna and a stationary or mobile spectrum analyzer. This is already sufficient for the surveillance of a wide area up to approximately 3 km diameter. 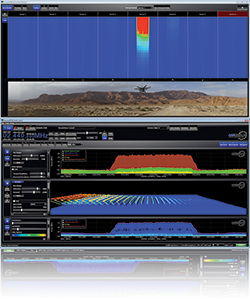 Figure 2 Aaronia’s custom software shows the presence of a UAV directly to the south of a detector installation. If the drone changes position, the red indication on the display will move to the right or left.

If a fully mobile solution is required, the system can be installed on a vehicle and operated on battery power. The Drone Detector’s antennas are resistant to the effects of salt water splashes or spray, enabling deployment on a boat. Once a signal has been detected, its approximate bearing will be shown to an accuracy that depends on which model of antenna is being used. With the standard IsoLOG 3D 80, the bearing accuracy will be at least within the 45º coverage of a single antenna sector but is often much higher (via software approximation up to 10º or even 5º).

When larger areas must be covered, several antennas and spectrum analyzers can be connected to a single centralized PC, which manages these simultaneously. The larger the area to be covered, the greater the number of antennas and analyzers that must be deployed.  Any threat signal is likely to be received by several antennas, so the results can be triangulated to provide detailed information on the location of the UAV and/or its operator. Figure 2 offers a physical example of the information generated.

The drone detection software offers an intuitive layout combined with powerful tracking, trigger and display options helping to identify, capture and track any RF emissions from drones/UAVs or other RF sources up to 20 GHz. Each sector/antenna gets its own real-time view, which enables the exact direction that the drone is coming from to be identified. Customizable alarms or pop-ups guarantee early warning for the operator/user.

Since the system is designed to recognize the RF signals specifically associated with UAVs by observing their frequency and other characteristics, it will not provide false alarms when faced with other types of RF signals. When faced with several UAVs, the system can detect these, no matter if the intruders are of the same type or different.

The average time needed for the detection of a UAV is between 10 µs and 500 ms. It depends on factors such as the complexity of the deployed system and the number of antenna arrays being used. While a clear line of sight between the antennas and the UAV or its operator gives the best results, the system can detect RF signals whose source is obscured by trees, bushes or a crowd of people. The system is passive, emitting no signals of its own that could interfere with the normal operation of nearby assets such as airports, or give the UAV operator warning of its presence. System performance is unaffected by darkness or poor weather — if meteorological conditions allow UAVs to fly, they can be detected.

The drone detection system can be used virtually anywhere. Typical use scenarios are the protection of residential areas, governmental buildings and commercial/industrial areas like nuclear plants. Available as a single-side or multiple-side solution, the system is adjustable to the characteristics of the terrain to be monitored.