We use cookies to provide you with a better experience. By continuing to browse the site you are agreeing to our use of cookies in accordance with our Privacy Policy.
Home » Second-Generation VST is Smarter for Today’s RF Test Challenges 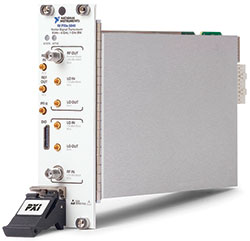 In 2012, NI announced the PXI vector signal transceiver (VST), the world’s first instrument to combine an RF vector signal generator and analyzer with a user-programmable FPGA into a single PXI module. The combination of the VST’s excellent RF performance and unique software experience enabled customers to reduce test cost and accelerate productivity in a wide range of applications: from wireless test to electronic warfare (EW). Its LabVIEW-programmable FPGA enabled many test optimizations, including power amplifier (PA) test with built-in output power leveling, spectral and demodulation measurement acceleration and other real-time signal processing algorithms.

Looking to the future, the changing requirements for RF and wireless test equipment are accelerating at an ever-increasing pace. Nowhere do we see this more clearly than in the International Telecommunication Union’s (ITU) defined use cases for 5G (see Figure 1). The first is enhanced mobile broadband (eMBB), which will drive peak data rates upwards of 10 Gbps through a combination of wider bandwidth, higher-order modulation and MIMO/beam forming technologies. The second use case, massive machine-type communication (mMTC), will connect a wide range of devices in more industrial IoT (IIoT) applications, and it will drive new mobile technologies such as LTE for machine-to-machine (M2M) communications and narrowband IoT (NB-IoT). The third use case defines ultra-reliable machine-type communication (uMTC), in which the key requirements are latency and packet error rates.  Although these strong trends deal mainly with cellular technology, they also drive new connectivity standards such as 802.11ad/ax, personal area networks and near field communication (NFC). These technological developments introduce new challenges for professionals designing and testing state-of-the-art devices and components for RF and wireless systems. Higher throughput demands wideband instruments, lower cost requires faster measurements and higher reliability introduces the need for new test techniques. 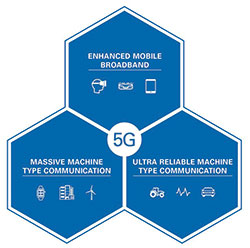 Next generation wireless device and transceiver test is one application that the VST is designed to address. The latest evolution of standards like LTE-Advanced Pro and 802.11ax introduce both new carrier-aggregation requirements and higher-order MIMO configurations. The second-generation VST’s smaller footprint and solution, with engineers able to configure up to eight MIMO test systems in a single 18-slot PXI chassis (see Figure 2). For carrier aggregation applications, the VST’s wide bandwidth enables engineers to generate widely spaced LTE carriers with a single instrument. As a result, engineers can replace test setups involving multiple signal generators and multiple signal analyzers with a single instrument.

The second-generation VST’s wide bandwidth is important in semiconductor test applications. Especially for PA and front-end module (FEM) testing, the bandwidth requirements for the instrument often exceed the bandwidth of the signal. For example, when testing RF power amplifiers (PA) operating in or near saturation, the VST measures the PA’s output signal, computes a predistorted signal following a digital predistortion (DPD) model and then applies the new signal to the DUT. As a result, when the signal goes through the nonlinear PA, the output will have minimum spectral regrowth. Advanced DPD algorithms often require the predistorted signal to have three to five times the bandwidth of the original RF signal. The new PXIe-5840 VST can measure signals with bandwidth requirements around 500 MHz for a 100 MHz LTE-Advanced signal and 800 MHz for a 160 MHz 802.11ac/ax signal.  By exploiting the power of the VST’s FPGA, this whole process can run in hardware, in real time, empowering PA engineers to apply custom DPD to every DUT, even in high volume manufacturing test environments (see Figure 3). 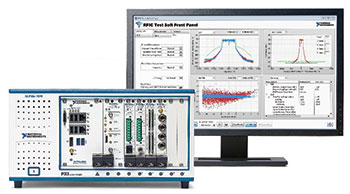 NI’s platform for FPGA development simplifies the process of modifying the VST’s firmware on its FPGA. This empowers researchers to use the VST to process RF signals in real time, for applications ranging from EW systems to radar target emulators. In a radar target emulator, engineers can program the VST to capture a stimulus signal from a radar system under test; introduce one or more targets of various sizes; add delays, Doppler shifts and other effects to the signal in real time; and immediately generate the response back to the radar receiver (see Figure 4).

Designers and users of automotive radar systems, for example, understand well that the consequences of just one of their systems not performing properly can prove disastrous. They need to run long validation routines for driver assistance systems, sometimes exceeding 10,000 hours. Without reliable test emulation platforms, like the one that the second-generation VST provides, engineers would have to drive millions of km, with all kinds of obstacles and in many different scenarios, to test the possible events that would lead their vehicle’s radar and networking systems to a critical failure.

Although the next wave of RF and wireless technologies is introducing significant design and test challenges, NI designed the second-generation VST to solve them. With unrivaled bandwidth, a smaller form factor and the largest and most customizable test platform, the PXIe-5840 VST empowers engineers to meet these RF test challenges.