We use cookies to provide you with a better experience. By continuing to browse the site you are agreeing to our use of cookies in accordance with our Privacy Policy.
×
Home » Pushing Board-to-Board Interconnect Performance Boundaries 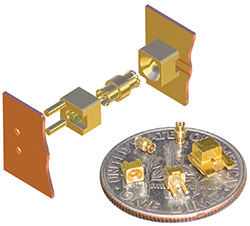 Nearly four decades ago, the RF design community was introduced to a new push-on connector that addressed the need for increased electrical performance, quicker installation and greater density in higher frequency applications. This design, commonly known as the sub-miniature push-on (SMP) connector, was built around a blind-mate adapter, or bullet, housed between two PCB or panel-mounted receptacles. The bullet, available in different lengths, tolerated a degree of axial and radial misalignment, or float, while still maintaining transmission integrity. This new connector opened the door for looser alignment tolerances and simplified the production process. It also accommodated a higher concentration of simultaneous microwave interconnects per circuit board or panel, by eliminating the bulky mounting hardware associated with threaded connectors.

Through the years, SMP size has continued to decrease, providing corresponding improvements in frequency. The introduction of a micro sub-miniature push-on (SMPM) — 45 percent smaller than the original SMP — then a sub-micro, sub-miniature push-on (SMPS) — which achieved a further 30 percent profile reduction —  moved RF capability beyond 65 GHz. These developments provided a solution for integration into tighter packaging and a reduced module footprint to support ongoing system and module miniaturization initiatives. As demand for these connectors has grown, many producers have introduced similarly engineered sub-miniature push-on products, enabling a high degree of vendor inter-mate-ability in the SMP realm, along with retrofit flexibility for the system design community.

Near industrywide commonality of design has perpetuated electrical and structural performance challenges with most SMP connectors. These include measurable VSWR degradation and insertion loss with radial or axial float, as well as pin instability, misalignment or breakage. Premature bullet failure, due to outer contact beam flex limitations, and PCB or interconnect damage, resulting from the high de-mating force required to decouple these interconnects at higher densities, can require costly rework or replacement. Ultimately, the shortcomings of  sub-miniature push-on products has left electronic system designers with a distinct need for new and better board-to-board interconnect alternatives. 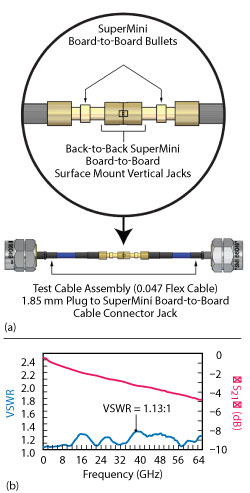 SuperMini Board-to-Board connectors employ a 0.9 mm interface to achieve the industry’s smallest, widely used footprint and highest volume of interconnections per board. With horizontal and vertical mount options, they are an excellent answer where space and weight efficiencies are essential, such as radar systems, phased array antennas, amplifiers, receiver units, switch matrices, channelizers and circuit cards. Designed to optimize electrical performance of the transmission path between connector and circuit for surface and thru-hole PCB mounting applications, SuperMini Board-to-Board connectors are available in smooth bore or detent style vertical and end-launch jack configurations for stripline, microstrip and grounded co-planar circuit launch transitions. All meet MIL-PRF-39012 for resistance to corrosion, vibration, mechanical shock and thermal shock.

SuperMini Board-to-Board solutions feature mating and de-mating forces that are the lowest in the industry: The typical mating force is 6 oz for smooth bore and 9 oz for the detent style. The typical de-mating force is also 6 oz for the smooth bore and 12 oz for the detent style. Without the excessive mating pressure common to legacy push-on solutions, engagement of hundreds of interconnections may be achieved without risking board damage, pin misalignment or fracture. Similarly, the low total de-mating force, even in a high volume array, facilitates ease of simultaneous decoupling of interconnects without the negative effects on the connector or PCB that are seen with other designs.

The SuperMini bullet’s outer contact beam (spring finger) design enables the prescribed amount of flexure without the over-stress and yield that cause premature set in standard bullets. This results in unmatched mating and de-mating cycles: more than 500 for both the smooth bore and detent styles. This positions the SuperMini as ideal for automatic circuit testing applications.

Since board-to-board stacking applications inherently have the potential for connector misalignment, the challenge with earlier push-on designs has been the degree of axial and radial float achievable before electrical performance is sacrificed. Widespread mating plane problems with legacy technology, which alters the characteristic geometry of contact surfaces when bullet-receptacle misalignment occurs, can create an inductive path that negatively affects VSWR. Conversely, Southwest Microwave’s unique bullet-receptacle interface design incurs dimensional changes on misalignment without significantly affecting the character of the transition contact surface, minimizing the effect on signals passing through the connector. This achieves superior electrical performance of the transmission path between connector and circuit, while accommodating axial float of up to 0.010" and radial float of ±10° without significantly affecting VSWR.