We use cookies to provide you with a better experience. By continuing to browse the site you are agreeing to our use of cookies in accordance with our Privacy Policy.
Home » Apache AH-64E guardian helicopters to include ViaSat Link 16 small tactical terminal
Aerospace and Defense Channel Industry News 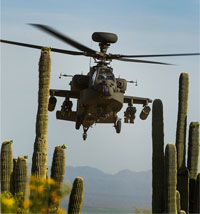 The Boeing Co. has awarded ViaSat Inc., a global broadband services and technology company, a contract for the production of approximately 90 Link 16 Small Tactical Terminals (STT) for the Lots 5 and 6 of the AH-64E Apache Guardian Attack Helicopter production line.

The AH-64 Apache is the world's most advanced multi-role combat helicopter and is used by the U.S. Army and a growing number of international defense forces. Specifically, this STT full-rate production contract will cover Apache helicopters for the next two years. In addition, the STT has been selected by the U.S. Government as the long-term radio solution for Link 16 and Soldier Radio Waveform (SRW) capability for AH-64E Apache helicopters. The commitment to the STT was made in recognition of the terminal's capability to meet the ongoing needs of today's warfighter while saving the U.S. government nearly $250M over the life of the program.

ViaSat brings real-time combat communications and network interoperability with its two-channel, software-defined STT. The low-SWaP (size, weight and power) STT enables the AH-64E Apache helicopters to maintain constant presence on the Link 16 network while simultaneously switching waveforms and network connections on the second channel on the fly; merge disparate networks; and deliver situational awareness as the mission unfolds. The terminal is packaged in an affordable, ruggedized, compact form factor that highlights both innovative design and usability.

"The AH-64E Apache award is a significant milestone for ViaSat in that it enables us to deliver critical communications capabilities for Army aviation while providing a logistically common solution for Link 16 needs across multiple applications," said Ken Peterman, senior vice president and general manager, Government Systems Division, ViaSat. "Our strategy in the defense market has been to recognize critical warfighter needs and apply our commercial model to develop inventive solutions with availability years ahead of, and at a fraction of the total cost of traditional DoD programs of record. We see this AH-64E Apache award as validation for our strategy and a key first step in laying the groundwork for future terminals that will provide key operational data to warfighters but in form factors previously considered unimaginable."