We use cookies to provide you with a better experience. By continuing to browse the site you are agreeing to our use of cookies in accordance with our Privacy Policy.
×
Home » Radar and Phased Array Breakthroughs
Aerospace and Defense Channel 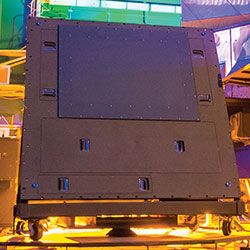 This article updates previous papers discussing significant developments, trends and breakthroughs in radar, phased arrays and the underlying technologies that enable them. 1-8

The upgrade has a main AESA array that is a bolt-on replacement antenna, approximately 9 feet wide and 13 feet tall, that is oriented toward the primary threat. It also has a new, rear, quarter-size AESA panel that gives 360 degree coverage. Another development is the launch of the first Zumwalt DDG-1000 stealth ship (see Figure 2), 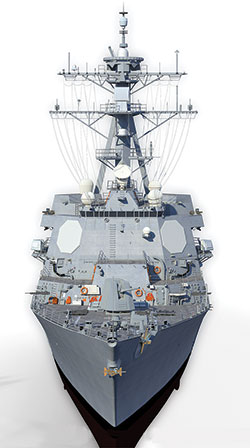 Figure 3 Rendering of the AMDR on the DDG 51 destroyer (source: Raytheon). AMDR will detect air and surface targets as well as ballistic missile threats. 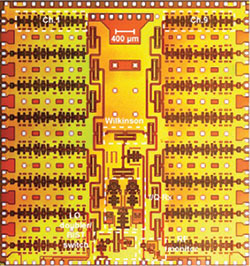 MMIC technology has evolved from four X-Band T/R modules with the control circuitry on a chip,1,2 with each T/R costing about $10, to a whole array on a chip or wafer at millimeter wave frequencies (see Figure 4).9,10 Intel built a 32-element 60 GHz Tx/Rx phased array on a chip.9 These phased array ICs will have built-in test circuits for calibration. The cell phone and Wi-Fi markets are driving this technology, with bandwidth demand predicted to increase 1,000-fold from 2010 to 2020, and the number of mobile devices from 5 to 50 billon.10 In the next decade, these array chips are expected to find wide use in garage door openers, videos players and computers.10 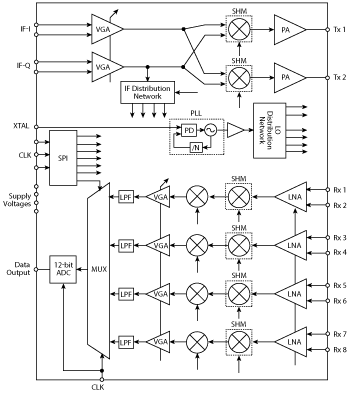 They will talk to each other via high bandwidth Wi-Fi. In the future, compact, ultra-low cost multiple-input-multiple-output (MIMO) millimeter wave multi-beam AESAs will be in everyday devices.10 We also see car radar benefiting from these highly integrated MMICs.11,12 Figure 5 shows the functional block diagram of a single-chip 77 GHz transceiver, and Figure 6 illustrates how the transceiver will be assembled with the signal processor and antenna on a PCB to minimize cost. Some forecast that future car radars will cost only a few dollars. A 24 GHz single-chip car radar developed by Autoliv13 fits on a 3.5" × 2.25" board, including the radar chip and a Texas Instruments signal processor that performs Kalman filter tracking.14 Over 2 million radar systems have been manufactured, with the cost of the board less than $100.14 Valeo Raytheon has developed a 25 GHz blind-spot, seven beam, phased array radar, costing only hundreds of dollars as an option from the car dealer.1,15,16 Who said phased arrays are expensive? Over 2 million of these have been produced.16 The car radar market is huge: over 70 million cars were built in 2014; assuming four radars per car, the market potential is over 280 million per year. 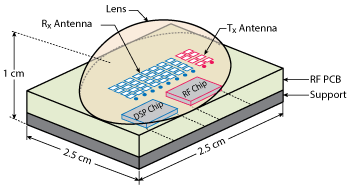 Figure 6 To minimize the cost of the 77 GHz radar, the single-chip RF transceiver, DSP, patch antenna array and lens will be assembled on a single PCB (source: University of Melbourne).

Gordon Moore predicted the application of MMICs to radar and phased arrays. The last sentence in his now famous paper17 states, “The successful realization of such items as phased array antennas, for example, using a multiplicity of integrated microwave power sources, could completely revolutionize radar.” Table 1 indicates the amazing advance made by Moore’s Law, showing a 350,000 improvement in the performance of FPGAs over 36 years. DARPA is funding the development of commercial FPGAs at microwave frequencies.1 Moore’s Law predicted that the number of transistors on a chip will increase by a factor of two every two years. Many think that will continue for a while, although it is getting more difficult.18 One extreme prediction is 600 years; more conservative ones are 10 to 20 years.18 Intel expects to go from a production line width of 14 nm in 2014 to 10 nm in 2017, a doubling in density in three years.52 Robert Colwell, formerly with the DARPA Microsystem Technology Office and, before that, Intel’s chief architect, predicts we will see an increase in the number of transistors by about a factor of 50 in the next 30 years, which averages to a doubling about every five years over the next 30 years.19 DARPA has a program to lower the power consumption of processors by a factor of about 75.19 Quantum computing offers the potential of orders-of-magnitude increases in computing power every generation, instead of the factor of two that Moore’s law provided.53 In 2014, 2.5 × 1020 transistors were manufactured – 250 billion billion. Imagine what it would take to do this with 1" × 1" × 2" vacuum tubes? They would cover the surface of the earth and stand eight miles high. 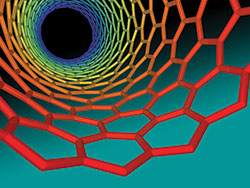 Helping further semiconductor technology is DARPA’s Compound Semiconductor Materials on Silicon (COSMOS) program1,20 and the follow-on Diverse Accessible Heterogeneous Integration (DAHI) program.21 The COSMOS program demonstrated, for the first time, the integration of GaN and CMOS on the same silicon substrate without wirebonds.20,21 Potentially helping to advance signal processing capabilities are nanotechnology, spintronics,54 graphene and carbon nanotubes1,22 (see Figure 7), memristors,2 synaptic transistors23 (see Figure 8) and the future possibility to transmit data optically on the chip. Transmitting electrical and optical signals over the same wire has been demonstrated.24 An alternative possibility is using IR beams in a Si IC (Si is transparent to IR) for transmitting signals at the speed of light and without ohmic losses.25 Graphene and carbon nanotubes (CNT) have the potential for terahertz transistor clock speeds, instead of gigahertz, which is nearly three orders of magnitude faster. The manufacture of graphene transistors on CMOS has been demonstrated. This could allow Moore’s law to march forward using present day manufacturing techniques. Spintronics could revolutionize the computer architecture away from the 1945 John von Neumann model of separate logic and memory units. Instead, the two functions would be the same for some products, with logic being low cost, non-volatile memory. Spintronics has the potential to replace hard drives with low cost, low power and more reliable memory, with no moving parts and faster access time for the data. There is also the potential for computing the way the brain does – efficiently and amazingly – going analog by using synaptic transistors and/or memristors. Realizing that the brain only weighs about two to three pounds and consumes only 20 W, we have a long way to go. It has been predicted that by using memristors, one could do what the brain does in a shoebox rather than a computer the size of a whole city and requiring a nuclear plant.2,55

Metamaterials are man-made materials that consist of repeated structures having a size less than a wavelength. These materials have properties not found in nature, like a negative index of refraction. Metamaterials are being used by Kymeta to develop communication antennas at 20 and 30 GHz, which could cost only $1,000.26-29 Kymeta is supplying these antennas for the Ob3 satellite system, which has 12 satellites in equatorial orbit at a medium earth orbit (MEO) altitude of 8,063 km. The antennas use slotted waveguides, with resonators placed along the waveguide to control whether the signal at the resonator is radiated. The resonators contain liquid crystals whose dielectric constant is controlled by a bias voltage; this shifts the resonator frequency which allows the signal to radiate or not radiate. The antennas are only the size of a laptop computer. The key question is whether they can achieve their production cost goal. A second company, Echodyne (which has ties to Kymeta), is developing metamaterial antennas for radar.30

Target cloaking has been demonstrated using fractal metamaterials. With cloaking, the electromagnetic wave signal transmitted by a radar goes around the target, making it invisible (see Figure 9). Another way to hide a target is to have the target absorb the incident radar signal. Such “stealthing” has been simulated using a fractal metamaterial coating that is less than 1 mm thick.33 90 percent absorption was achieved from 2 to 20 GHz and around 99 percent from 10 to 15 GHz. Good absorption was achieved for a very large range of incident angles and polarizations.

With metamaterials it is now possible to replace the tall, highly visible Army jeep whip antennas with a flush mounted λ/20 thick antenna34 (see Figure 10). Other capabilities of metamaterials include the ability to focus beyond the λ/2 diffraction limit, provide higher isolation and increase the scan angle for arrays.1,2 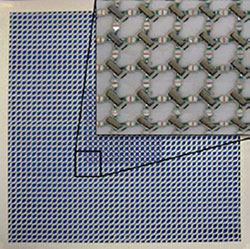 In addition to the S-Band shipboard AESAs developed by Elta in Israel and CEA Technologies in Australia that utilize digital beam forming at every element,2 add Thales with a 1000 element, S-Band radar.41 Raytheon is developing a mixer-less system with direct RF analog-to-digital conversion that has greater than 400 MHz instantaneous bandwidth and is reconfigurable, able to switch between S- and X-Band.42 Instead of using down-converters followed by a low frequency ADC, the design uses a sample-and-hold chip followed by a low frequency ADC. For the SANTANA Internet on-the-move system, IMST has developed AESAs for 30 MHz uplink and 20 MHz downlink between satellites and airplanes, railroad trains and cars. These AESAs utilize an ADC and digital-to-analog converter (DAC) for every element channel.43 Instead of PCBs, they use LTCC stacks.

The high power microwave tubes used for active denial systems may soon be replaced by solid-state power devices. The magnetrons in microwave ovens are being replaced by transistors. Raytheon and MIT Lincoln Laboratory are using commercial technology to achieve low cost AESAs for ground radar.1 Rockwell Collins is continuing this trend with the development of an X-Band airborne AESA using low cost SiGe ICs and PCBs for the array.46 MIT Lincoln Laboratory increased receiver SFDR, limited by intermodulation from receiver and ADC nonlinearities, by 40 dB. This represents a 40 year advance, given the historic progression of one bit every six years for ADCs.47

Printable electronics is making great strides and should soon yield major advances because of the large market for wearable, flexible electronics. Several approaches are being investigated, including the use of metal-insulator-metal (MIM) diodes,48 2D MoS2 ink49 and Si and NbSi2 particles, which have produced diodes at 1.6 GHz and have the goal of operating at the 2.4 GHz Wi-Fi band.50 It was recently shown that a low thickness (λ/40), wideband (20:1 bandwidth), dual polarized antenna can be built using tightly coupled dipole antennas (TCDA)44,45 (see Figure 11). And quantum radar, based on microwave-optical entanglement, is claimed to provide better false alarm rate and signal-to-noise ratio than a conventional radar.51

We live in exciting times.

Eli Brookner is well known for his contributions to radar technology. He retired from Raytheon as Principal Engineering Fellow in 2014 after a long and distinguished career. He has contributed to radars for air traffic control, defense, space and navigation – virtually every major defense radar program. Brookner has been recognized with numerous awards and honors, including Fellow of the IEEE, AIAA, and MSS and the 2006 Dennis J. Picard Medal for Radar Technology and Application. He has written numerous papers and articles and four books on radar systems and signal processing. Brookner received his bachelor’s degree in electrical engineering from the City College of New York and his master’s and Dr.Sc. from Columbia University.

Phased Array Radar At the Intersection of Military and Commercial Innovation