We use cookies to provide you with a better experience. By continuing to browse the site you are agreeing to our use of cookies in accordance with our Privacy Policy.
Home » A New Method for Testing Satellite TV Tuners and LNBs

A New Method for Testing Satellite TV Tuners and LNBs

Gain, noise factor, intermodulation suppression testing of satellite tuners and low noise block converters (LNB) has always been a job for classic RF test and measurement equipment. But even here, digital technology is increasingly replacing analog circuitry. Instead of conventional tuners, next-generation devices use broadband analog-to-digital (A/D) converter front-ends for reception in L-Band. Due to this technology shift, new test strategies are needed. U.S. based satellite operator EchoStar plans to use load profiles to test set-top boxes and LNBs and considers digital multichannel signal generators as an efficient solution.

For as long as satellite TV has existed, LNBs and satellite tuners have been designed as superheterodyne receivers. The LNB converts the downlink signal from Ku-Band to L-Band. The satellite tuner in the TV or set-top box then converts the L-Band signal to a lower intermediate frequency where the desired channel is selected and decoded. Testing of such receivers has worked perfectly well with standard RF measuring instruments: a network analyzer to measure the gain and matching, a spectrum analyzer to test the image frequency rejection and third-order intercept and to detect spurious responses and a noise source to measure the noise factor. CW carriers were used as test signals, and a modulated carrier from a signal generator was required only to test the decoder. It was considered that simulation of a fully loaded band was not practical due to cost constraints, since a separate modulator with L-Band up-converter would have been required for each channel.

Now, however, the situation is changing in a fundamental way. In next-generation set-top boxes and outdoor units (ODU), the superhet front-end is replaced by an A/D converter for direct sampling of the satellite IF signal, which is normally in the 950 to 2150 MHz range (L-Band). However, there are cases where the signal can begin at 250 MHz and extend all the way to 3 GHz. The new receivers digitize a wide sub-range that can span 1000 MHz, for example. This is known as full-band capture technology (see Figure 1). The channel to be decoded is selected based on digital signal processing. The advantages of such an architecture are obvious: less analog circuit technology means fewer tolerances, less alignment and less space needed on the printed board. Since fast A/D converters are commercially available, this approach is also more cost-effective.

However, these new direct-sampling receivers require a different test and measurement approach. Since analog test equipment can no longer access the IF signal processing chain, parameters such as gain may have to be derived from other measurements. Measurements with a single CW signal or a carrier that has a narrowband profile compared to the receive bandwidth are not adequate. Instead, the receiver must be tested with full transponder load in order to simulate the real world satellite signal as closely as possible. Previous methods utilizing a single carrier at a simulated total aggregate power will yield different or undesired results in the A/D section. For an A/D converter, it is crucial to optimize the functionality over the entire expected dynamic range of the input signal. 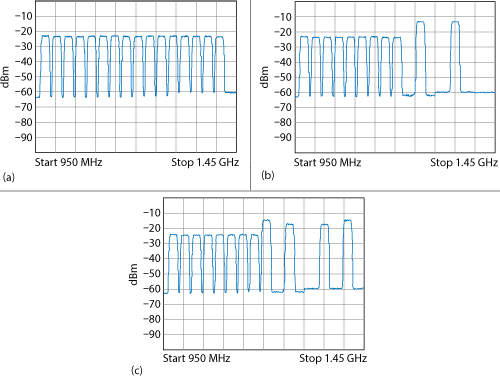 Network operators use a large number of different transponder loads, as shown in Figure 2. Due to spot beams, these can have a wide dynamic range. To test LNBs and set-top boxes, EchoStar has developed a new test strategy based on simulated transponder loads. The tests are executed with a series of load profiles in order to simulate the different transponder loads in a real world satellite TV network. Load profiles are chosen that will stress the A/D converter in various ways to ensure that the LNBs and set-top boxes do not degrade the received signal under real conditions, guaranteeing best modulation error ratio (MER) and a low bit error rate (BER). The satellite operator is adopting this test strategy for the latest generation of LNBs and set-top boxes for the first time. It is expected that manufacturers will increasingly test with load profiles in the future.

Figure 4 Selective degradation of the signal quality in a transponder using phase noise.

For the test and measurement equipment, the greatest challenge associated with this test strategy is generating a sufficient number of modulated transponder signals. Until now, two different approaches were available, each with specific technical or economic drawbacks. One approach involves using a number of satellite TV modulators as they are typically used in the uplink and aggregating their output signals. Such a setup is complicated to configure and calibrate and requires a great deal of space and power. It is also relatively costly due to the large number of modulators. Alternatively, an arbitrary waveform generator with sufficient bandwidth can be used, although it is not easy to generate a suitable I/Q waveform file for multiple satellite TV transponders. Even minor changes to the configuration require the creation of a new waveform file, which makes this approach rather inflexible. Using a multichannel satellite load generator (SLG) greatly simplifies this job by simultaneously generating up to 32 satellite transponder signals. The symbol rate, forward error correction (FEC), frequency and level can be individually set for each transponder. Up to 16 transponders can transmit live video signals.

Figure 3 illustrates the test system used at EchoStar. A multichannel SLG produces the modulated signals in the frequency range from 250 to 3000 MHz. The different load profiles are stored on the instrument as configurations and then called up in sequence. When testing a set-top box, the generator’s output signal is fed directly to the input of the device under test (DUT). The instrument basically simulates the output of an LNB. The set-top box supplies the bit error ratio or the number of uncorrected FEC packets per time unit. Alternatively, the picture quality of the HDMI™ output signal from the set-top box can be analyzed, with a video tester for example. To test an LNB, the SLG load profile is first converted with an up-converter to Ku-Band and then passed to the DUT input. The DUT supplies a satellite IF signal that is either measured with a vector signal analyzer or decoded with a reference receiver. The reference receiver outputs the BER along with a number of other parameters for the demodulated signal. A PC controls the different instruments and stores the results.

The multichannel signal generator is a very useful signal source for this test system because it requires much less space and power and generates less heat and noise than 16 individual modulators. It is controlled over an Ethernet interface for ease of local or remote control. Stored load profiles can be easily recalled for subsequent usage, and the signal can be selectively degraded with additive white Gaussian noise (AWGN) and phase noise (see Figure 4). The phase noise generator is especially attractive to EchoStar as it will enable deeper insights into the performance limits of the new direct-sampling tuners. The company had previously found it nearly impossible to develop and verify a specification for phase noise.

The next generation of direct-sampling front-ends is revolutionizing the design of satellite receivers. Digital multichannel signal generators allow users to keep pace with this technological advance and test the new receivers as thoroughly as classic superhet receivers were tested in the past.