We use cookies to provide you with a better experience. By continuing to browse the site you are agreeing to our use of cookies in accordance with our Privacy Policy.
×
Stay Connected :
Home » IC foundry sales will keep hitting records through 2018
Industry News

Worldwide foundry revenues for integrated circuits were expected to rise 13% in 2014 to a new record-high level of $47.9 billion, after increasing 13% in 2013 and 18% in 2012. These estimates are from the new 2015 edition of The Foundry Almanac, a jointly produced annual report by the Global Semiconductor Alliance (GSA) and market researcher IC Insights.  The seventh edition of The Foundry Almanac forecasts IC foundry sales to grow 12% to reach another record high of $53.7 billion in 2015.

Foundry-made IC products are on track to account for 37% of total worldwide integrated circuit sales in 2014 compared to 24% in 2009 and 21% in 2004.  By 2018, foundry-made ICs will represent 46% of the industry’s total integrated circuit revenues, based on the forecast contained inThe 2015 Foundry Almanac.  The new report shows total sales of foundry-made ICs increasing at a compound annual growth rate (CAGR) of nearly 11% between 2013 and 2018.  This is more than double the projected CAGR for total IC industry sales in the five-year forecast period of the report. 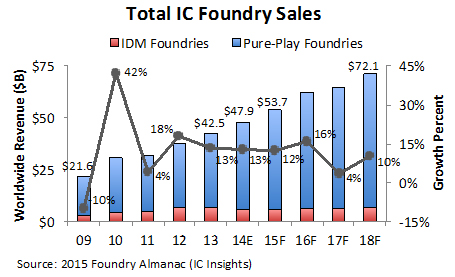 Currently, about 88% of contract wafer-processing sales are generated by pure-play IC foundries with 12% coming from integrated device manufacturers (IDMs) that provide foundry services to other companies.  The pure-play foundry portion of dollar volumes is expected to exceed 90% in the next two years, according to the GSA-IC Insights jointly produced report, which includes IC Insights’ forecast and analysis of foundry revenues by end-use applications, region, and process technology generations as well as rankings of suppliers, capital spending projections, and findings from worldwide wafer- and mask-pricing surveys conducted by the GSA.

Among key conclusions and highlights in The 2015 Foundry Almanac are: