We use cookies to provide you with a better experience. By continuing to browse the site you are agreeing to our use of cookies in accordance with our Privacy Policy.
×
Home » A High IIP3, 300 MHz to 6 GHz Active Mixer 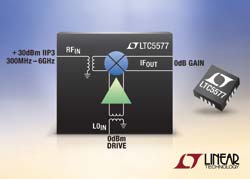 Rarely do active RF mixers break the +30 dBm IIP3 barrier without sacrificing other performance parameters. The Linear Technology LTC5577 is just such an RF mixer. The mixer employs a new active mixer topology to achieve its +30 dBm IIP3. It has a high conversion gain of 0.7 dB, 0 dBm LO drive and wide frequency operation from 300 MHz to 6 GHz. Its active, double balanced design brings the additional benefits of excellent port-to-port isolation, low 2×2 and 3×3 spurious mixing products, and low pseudo-image mixing products that can degrade receiver performance.

The LTC5577 has integrated wideband transformers on its RF and LO inputs that are tuned to 50 ohm single-ended over a wide frequency range. With a fixed external matching circuit, the part operates continuously from 700 MHz to 4.3 GHz with excellent gain flatness. As a result, minimum external components are needed, thereby reducing system cost and solution size. Additionally, its IF output port, usable from 1 MHz to 1.5 GHz, delivers flat conversion gain performance to over 600 MHz bandwidth, supporting LTE and LTE-Advanced base station receivers, as well as other wideband receiver applications.

The mixer also has an integrated LO buffer, requiring only 0 dBm LO drive and tolerating ±6 dB of LO power variation. This eliminates an external high power LO amplifier, which would otherwise require extra power and increased cost. Additionally, a high power LO source in the +17 to +20 dBm range is eliminated, reducing the risk of unintended radiation that may corrupt other parts of the system’s RF circuits. As a result, the device saves the cost of RF shielding hardware that would otherwise be necessary. The LTC5577 mixer runs on a single 3.3 V supply with an economized supply current of only 180 mA.

The LTC5577’s active, double-balanced mixer topology provides other unique benefits. Aside from its high conversion gain and very wide bandwidth, the LTC5577 solves other underlying problems that often challenge designers such as:

The LTC5577’s active mixer topology has an excellent LO to RF leakage of less than –50 dBm, dramatically reducing the undesired LO signal leaking back toward the antenna. This compares favorably to passive mixers that typically have only about 30 dB of isolation, and with a strong LO input level of about +17 dBm results in a much higher –13 dBm LO to RF leakage level. Using the LTC5577 mixer, an external high isolation circulator can be eliminated at the RF input, resulting in a more cost-effective, wideband solution that is space efficient and easy to design.

The LTC5577’s architecture produces exceptionally low LO and RF harmonic distortion mixing spur products. Its 2×2 (1/2 IF) output distortion spurs measure –79 dBc, while the 3×3 (1/3 IF) spurs are further below at -–81 dBc. Such low distortion makes for higher performance in broadband receivers and also improves the distortion correction performance when used in digital predistortion (DPD) receiver applications. 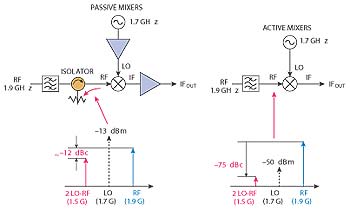 Moreover, the LTC5577’s RF input is designed to withstand strong in-band blocking signals with minimal performance degradation. For example, with a +5 dBm input interference signal, its noise figure only degrades from 11.8 to 15.8 dB, compared to other similar class mixers that typically degrade to more than 20 dB. This ensures robust receiver sensitivity in the presence of strong interference.

Due to their bi-directional nature and un-buffered RF input, passive mixers have an undesired mixing product present at the RF input, referred to as the “pseudo-image.” In the frequency domain, this mixing product is located one IF away from the LO, with a level that is typically 12 dB below the RF input signal level. If not terminated with an isolator or attenuator pad, this mixing product can reflect off the RF input filter and re-enter the mixer, resulting in degraded noise figure at certain frequencies, depending on the electrical length between the filter and mixer. Active mixers like the LTC5577 also have this spur present at the RF input, but at a much lower level, typically –75 dBc. This results in improved receiver sensitivity and simplified RF design by eliminating the need for a circulator or attenuator at the mixer input. Figure 1 illustrates the pseudo-image and LO leakage levels at the RF input for a passive mixer compared to the LTC5577 active mixer.