We use cookies to provide you with a better experience. By continuing to browse the site you are agreeing to our use of cookies in accordance with our Privacy Policy.
Home » Broadband LDMOS FETs for Land Mobile Radios 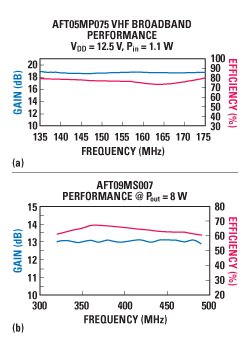 Figure 1 Only an inexpensive driver and the AFT09MS007 are required to provide the 7 W required for handheld radios or the AFT05MP075 to produce a 55 W+ amplifier for vehicle-mounted radios.

Handheld and vehicle-mounted transceivers used by public safety and other agencies may look much like their predecessors, but peering inside reveals a profound difference, thanks to the “digitization” of functions formerly performed by analog components. Nevertheless, although the transmit section (and some receive components) remain the last bastion of RF technology within these increasingly digital products, advancements are being made in performance and functional integration as well as size reduction and power consumption. Two additions to Freescale® Semiconductor’s AirfastTM RF power solutions family have been designed to address these challenges by reducing amplification stages and covering multiple frequency allocations with a single device.

The AFT09MS007 and AFT05MP075 are broadband LDMOS FETs that can be optimized for operation over wide bandwidths between 136 to 941 MHz and 136 to 520 MHz, respectively. The AFT09MS007 operates from a supply voltage of 7.5 VDC making it compatible with handheld radio power supplies. The AFT05MP075 delivers 70 W or more and operates from a 12.5 to 13.6 VDC supply, typically a vehicle battery.

Both devices can operate into a VSWR greater than 65:1 without degradation, even when driven with twice their rated input power from a supply voltage of 10.5 (AFT09MS007N) and 17 VDC (AFT05MP075). They have built-in protection against electrostatic discharge, are housed in Freescale’s over-molded plastic packages, and are available in tape and reel.

The ability of both devices to cover more than one frequency allocation (such as 136 to 174 MHz or 350 to 520 MHz) provides significant benefits for manufacturers as they can rely on a single device to serve all or most of their entire product line. The manufacturer’s portfolio will typically have a lower bill of materials, fewer circuit designs, and lower cost than if different devices were used. It also allows manufacturers to address the need of agencies that operate at frequencies other than the standard public safety bands, whether they require small or large quantities of radios.

It is obviously advantageous for radio manufacturers to use as few different RF power transistors as possible throughout their product lines. This is often not the case, as transceiver manufacturers typically use different RF power transistors over a specific band or split bands such as 350 to 520 MHz into two or even three parts to optimize for efficiency or another parameter. The Airfast devices eliminate this requirement. The devices achieve their performance without use of internal matching, so rather than being optimized to operate over a relatively narrow, fixed band they can, through external matching, be optimized over any bandwidth within their specified range of operating frequencies. 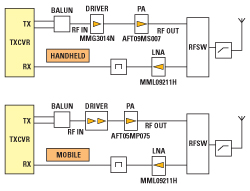 Figure 1 shows the performance of the two devices in typical mobile radiobroadband circuits. The AFT05MS075 shows excellent performance characteristics across VHF frequencies from 136 to 174 MHz. At 12.5 V operation, the device has typical gain of 18.8 dB, producing 84 W nominal with 1.1 W of input drive. Efficiency under these conditions is typically 76 percent. The AFT05MS075 is also characterized for 13.6 V operation. When operated at the higher voltage, power gain increases approximately 0.5 dB and output power increases to 94 W nominal when tested with the same 1.1 W input. Efficiency is similar at the higher power condition.

The AFT09MS007 is shown operating into a single broadband UHF fixture. The fixture shown is tuned for 350 to 490 MHz. At a power output of 8 W, the device exhibits typical gain of 13 dB and efficiency of greater than 60 percent across the band. For lower power operation, the device has also been tested at a power output level of 6 W. Under this condition, the device shows typical gain of 11.8 dB and typical efficiency of 63 percent.

In addition, as the devices have high gain and efficiency, the rated output power of the end product can be satisfied using fewer amplifier stages, further building on the previously mentioned advantages of reduced parts count, board space and cost. Both the AFT09MS007 and AFT05MP075 employed as the final amplifier in a handheld and vehicle-mounted transceiver (respectively) can deliver their rated power when driven by a single, inexpensive driver amplifier. 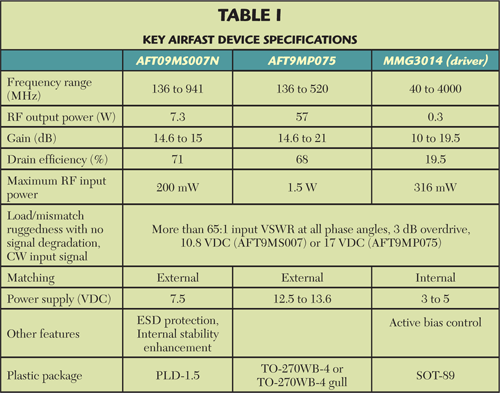 Both Airfast devices also have integrated stability enhancement circuitry, which is particularly desirable for the AFT05MP075 as it draws its DC power from a vehicle battery. Although vehicle power supplies are regulated, their voltage can vary dramatically from 12 VDC to as low as 10 VDC and as high as 17 VDC depending on environmental and other conditions. Transceivers typically have power monitoring circuits that maintain stable RF performance under varying power supply voltages, but when voltage drops, the circuit boosts the RF input power to driver amplifier to compensate. The stability enhancement circuits within the devices compensate for the effects of these conditions, so they remain stable in severe under- and over-voltage conditions produced by idling, a faulty regulator or battery, hot under-hood temperatures, as well as varying ambient temperatures encountered throughout the seasons.

The two new devices join a growing family of Airfast LDMOS and GaN RF power transistors for land mobile radio applications as well as “MRF” series LDMOS FETs that operate from 7.5 to 12 VDC. The AFT09MS007N and AFT05MP075 are available now and are supported by reference designs, evaluation boards, and other designer resources.