We use cookies to provide you with a better experience. By continuing to browse the site you are agreeing to our use of cookies in accordance with our Privacy Policy.
Home » Design and Test Challenges for Next-Generation 802.11ac, ad WLAN Standards
Cellular 4G/LTE Channel 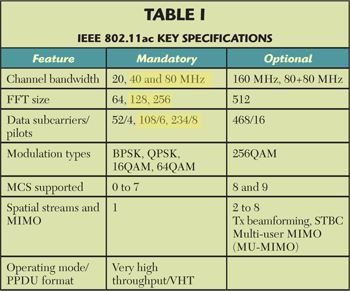 Equipment based on the 802.11 wireless LAN standards (first IEEE 802.11a and b, 802.11g in 2003 and 802.11n in 2009) has moved firmly into the home and home office environment. Now, whether at work or play, we have multiple devices that need to be connected together: computers, smartphones, tablets, printers, game consoles, media servers, scanners and more. Beyond what we do now, proposed usage models requiring even higher data throughput to support tomorrow’s home and office applications are driving the most recent versions of wireless LAN standards.

In addition to the 2.4 and 5 GHz wireless LAN standards currently used, there are active proposals within the standards organization for vehicular applications (802.11p), TV white space frequencies (802.11af) and sub-1 GHz to support extended range applications (802.11ah), though there is no commercial activity yet in these areas.

IEEE Working Group TGac has specified 802.11ac as an extension of 802.11n, providing a minimum of 500 Mbit/s single link and 1 Gbps overall throughput, running in the 5 GHz band. The physical layer is an extension of the existing 802.11n standard, and bearing in mind the huge number of existing client devices, backward compatibility with existing standards using the same frequency range is a must. Table 1 shows the physical layer features of 802.11ac and highlights the mandatory extensions from 802.11n. Companies are already shipping commercial products based on the current draft of the standard.

The new wider channel bandwidths are shown in Figure 1. While 160 MHz and 80+80 MHz modes are both included as optional features in the 802.11ac standard, it is likely that first devices will have a maximum of 80 MHz bandwidth, and no more than the maximum four spatial streams specified in 802.11n.

Even though the first 802.11ac consumer devices might be limited to an 80 MHz channel with four spatial streams, 160 MHz and 80+80 MHz modes are both included as optional features and will be a focus for chip and device development. New simulation, signal generation and analysis tools must include scenarios of non-contiguous frequency blocks, as well as being able to cope with the need for 160 MHz modulation bandwidth at 5 GHz. Previous RF wireless communications standards have required much narrower channel bandwidths, and test equipment development has followed those needs. For transmitter design and development, today’s vector signal analyzer (VSA) must be able to cope with the correct demodulation, analysis and display of a wireless signal that uses two frequency blocks, OFDM modulation and may comprise up to the eight MIMO data streams allowed in the standard. Figure 2 is an example display, showing each of the eight MIMO transmit streams and a summary table of the results.

The receiver must recover multiple simultaneous signals and adequately demodulate and decode them. The signal generation equipment needed for receiver design and development has the same overall frequency, bandwidth and multiple data stream requirements as the transmitter. In addition, it must provide a wide range of stress-test conditions – including repeatable and deterministic dynamic fading of each MIMO path as well as interference scenarios to ensure the receiver is designed to cope with the worst real world conditions. Up to eight separate signal generators may be needed to produce the required MIMO channel, along with additional generators to provide interference. Both modular and desktop product configurations are available, each having its own benefits and providing choices depending on specific test requirements. Figure 3 shows one example.

While 802.11ac is an extension of the existing 802.11n specification, 802.11ad represents a completely new paradigm. Extreme data capacity requires a large spectrum allocation. Data capacity is ultimately tied to modulation order and bandwidth. Simplicity of design demands such bandwidth be a smaller percentage of the transmission frequency (Q) and the practical reality is such bandwidth is only available at higher frequencies. 802.11ad has been specified by Working Group TGad, in partnership with the Wireless Gigabit Alliance, and operates over a short range in an established global unlicensed 60 GHz band. It is designed to provide the multi-gigabit data rates required for uncompressed high-definition multimedia transmissions, including known futures such as 2048×1080 and 4096×2160 digital cinema and 3D video streaming. 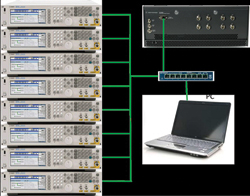 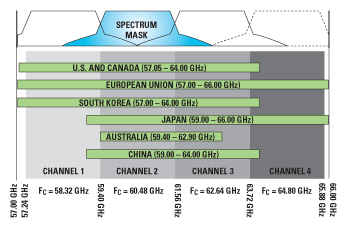 The unlicensed frequency allocations at around 60 GHz in each region do not match exactly, but there is substantial overlap; at least 3.5 GHz of contiguous spectrum is available in all regions that have allocated spectrum. The ITU-R recommended channelization comprises four channels, each 2.16 GHz wide, centered on 58.32, 60.48, 62.64 and 64.80 GHz respectively. As Figure 4 illustrates, not all channels are available in all countries.  Channel 2, which is globally available, is therefore the default channel for equipment operating in this frequency band. In November 2011, this channelization and the corresponding spectrum mask for the occupying signal were approved by ITU-R WP 5A for global standardization.

The 802.11ad specification defines a backward-compatible extension to the IEEE 802.11-2007 specification that extends the MAC and physical layer (PHY) definitions as necessary to support short-range (1 to 10m) wireless interchange of data between devices over an ad-hoc network at data rates up to approximately 6.75 Gbps in the 60 GHz unlicensed band. It also supports session switching between the 2.4, 5 and 60 GHz bands.

802.11ad uses RF burst transmissions that start with a synchronization preamble (common to all modes) followed by header and payload data. The preamble is always single-carrier modulation, the header and data may use single-carrier (SC) or OFDM modulation depending on the target bit rate.

Each PHY type has a distinct purpose and packet structure, but care has been taken to align the packet structures, and in particular the preambles, to simplify signal acquisition, processing and PHY type identification in the receiver. The three packet types share an essentially common preamble structure comprising a Short Training Field (STF) followed by a Channel Estimation Field (CEF). These fields are constructed from π/2-BPSK modulated repeating Golay sequences.

Golay complementary sequences are sequences of bipolar symbols (±1) that have been mathematically constructed to have very specific autocorrelation properties. The ‘a’ and ‘b’ indicate that the “Ga128” and “Gb128” sequences form a complementary pair and the suffix indicates the sequence length.

The mathematics behind the sequence constructions is beyond the scope of this article, but important attributes of these sequences are:

Multiple-antenna configurations using beam steering are an optional feature of the specifications. Beam steering can be employed to circumnavigate minor obstacles, such as people moving around a room or a piece of furniture blocking line-of-sight transmission. 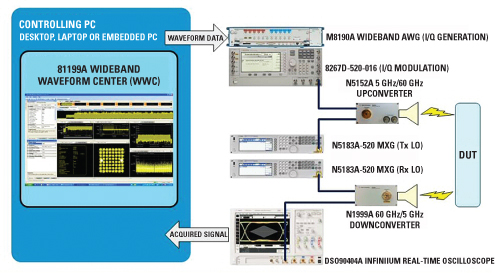 Component and system design and test at 60 GHz is a well-understood and established science, but its application to high-volume, low-cost devices for the consumer market is new. Two major differences are the much wider modulation bandwidth than other wireless communications systems, and the physical construction of the devices which may not allow direct connection.

The system shown in Figure 5 combines all the equipment needed for transmitter and receiver design and development in one software-controlled package, providing signal generation and analysis capability tailored to high-bandwidth applications running in the 60 GHz band. It allows the use of calibrated horn antennae, since in many complete devices, the antenna is bonded directly to the RF components and a direct metallic connection is not possible. The system can also be used in conjunction with software (Agilent’s SystemVue design libraries) to analyze and compare real-world measurements with those predicted by design simulations.

802.11ac and 802.11ad both aim to provide significantly higher data throughput than previous wireless LAN systems and are complementary. 802.11ac is an evolution of the 802.11 WLAN capability. It gives the “unwired office” the ability to compete directly with gigabit wired systems, while offering much better office layout and connection flexibility. 802.11ad is an extension of the 802.11 family providing ad-hoc connectivity to deliver extreme data rates between devices over short distances. Both standards pose new challenges in design, development and test: 802.11ac due to the somewhat wider bandwidths used and 802.11ad due to even wider bandwidth and to the new application of 60 GHz technology to consumer devices. In each case, proving design integrity during product development is critical. Manufacturing test must be minimal enough to preserve cost, while being sufficient enough to ensure product and process control.