We use cookies to provide you with a better experience. By continuing to browse the site you are agreeing to our use of cookies in accordance with our Privacy Policy.
×
Home » Full Waveguide Band Ortho-Mode Transducers 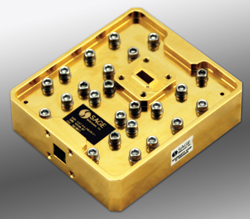 Ortho-Mode Transducer (OMT)is an important microwave component that separates a signal into two linear orthogonal polarized signals received from a common port or, vice versa, combines two such signals from vertical and horizontal ports into a common port. The OMT supports circularly, elliptically and linearly-polarized waveforms in general. Combined with a polarizer, the OMT can support both left-hand and right-hand circular polarized waveforms simultaneously. OMT is widely used in satellite data transmission and satellite television broadcasting. It also finds applications in commercial and military radar systems as a diplexer when a dual-polarized radar antenna is used. In telecommunications, OMT plays a unique role in TDD systems where the transmitting and receiving signals are at the same frequency.

The SAT series OMTs offered by SAGE Millimeter Inc. are full waveguide band Ortho-Mode Transducers that cover entire standard rectangular waveguide bands from Ku- to W-Band in the frequency range of 12.5 to 110 GHz with eight individual models. The OMTs are configured with one square waveguide for antenna port and two rectangular waveguides, one for H-Port and another for V-Port. These OMTs exhibit low insertion loss throughout the entire waveguide band, which enables their high power handling capacity. In the meantime, the greater than 40 dB isolation between the horizontal and vertical ports and 35 dB cross-polarization make them more attractive and useful for transmitter and receiver duplexing. Unlike their counterpart, narrowband OMTs, these full waveguide band OMTs find a convenient way in antenna test setups, such as compact, near field and far field ranges as they allow two signals in orthogonal polarizations to be measured at the same time across entire waveguide bands without using multiple OMTs.

An example of the full waveguide band OMT family is a Ka-Band version with model number SAT-KA-28028-S1. The model measures 2.5"W × 2.75"L × 0.75"H and weighs 5.2 oz. Its antenna port is equipped with a 0.28"W × 0.28"H square waveguide and H and V ports are with standard WR-28 waveguides. The model exhibits 0.4 dB maximum insertion loss, 40 dB minimum isolation between the H and V ports and 35 dB minimum cross-polarizations. Similar performance is achieved for all eight models.