We use cookies to provide you with a better experience. By continuing to browse the site you are agreeing to our use of cookies in accordance with our Privacy Policy.
Home » Improving Ultra-Low Cryogenic Temperature Measurements

Noise and uncertainty are the enemies of temperature measurement accuracy, resolution and speed. In the science of cryogenic temperature measurement and control, there are unique challenges in addressing the many sources of potential error. Because the allowable excitation power for the sensors becomes diminishingly small as the temperatures being measured approach absolute zero, the signal levels being measured from those sensors are extremely low. Thus, elimination of noise becomes a critical factor in overall measurement quality.

Recent noise-reducing circuit improvements to cryogenic temperature controllers are improving their overall measurement capability. Among these improvements are improved heater output circuits that generate lower noise and better layout and isolation of the critical input circuits so they pick up less noise. 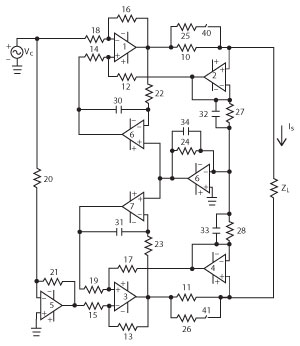 The newest cryogenic temperature controllers, such as the Model 350 developed by Westerville, OH-based Lake Shore Cryotronics, actually enable ultra-low temperature platform users and OEMs to achieve a new level of quality in measurement and control without requiring the use of more sophisticated AC resistance bridge instruments. This is achieved by reducing input noise by almost a factor of two over previous controllers and limiting the impact of environmental noise. The result is the ability to operate at excitation powers that are nine times lower than before, with a comparable reduction in measurement self-heating errors and an improvement in resolution, speed and overall control stability.

Another significant innovation is the adaption of specialized noise reduction input circuitry from AC resistance bridges. This technology has enabled these premium instruments to provide accurate measurement and control down to 20 mK and below by preventing external noise power from creating self-heating in the sensor. In real-world ultra-low temperature (ULT) installations, it is impossible to eliminate all of the noise induced in the sensor’s input wiring from external sources. Rather than asking researchers to continually fight these effects with grounding and shielding schemes that will always be somewhat imperfect, the instrument’s noise reduction circuitry cancels this noise internally. Figure 1 shows the general design of differential current source circuitry (US Patent 6,501,225) developed specifically for noise reduction in an AC resistance bridge.

Integration of this and other circuit improvements into modestly-priced next generation controllers enables them to measure and control temperatures down to 100 mK using sensor excitation current levels of as little as 10 nA, with resolution on the order of a few µK. This is quite suitable for pumped Helium-3 (He-3) refrigerators and similar ULT platforms. Reduced excitation current increases measurement accuracy by reducing errors due to self-heating. Better resolution means faster measurements, because a dependable result can be achieved with less averaging – and faster measurements enable faster response and better overall control stability for more consistent temperature management at the extremes.

Comparisons were made between the new Model 350 controller and a previous design, the Model 340. Since the new controller is capable of lower excitation current settings than the earlier model, the older model’s minimum current setting (30 nA) was used for the comparison. A Cernox™ CX-1010 sensor was selected with a 30 kΩ value at 100 mK, which was the target temperature for this test. 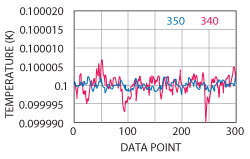 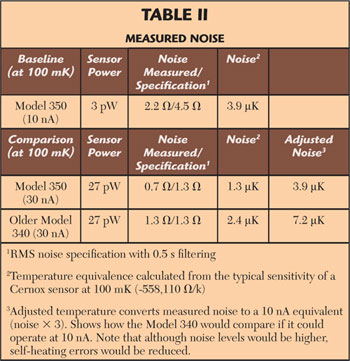 Table 1 shows the power and resulting self-heating offsets at excitation currents of 10 and 30 nA when using this sensor, illustrating the importance of excitation power and sensor selection. A typical Cernox CX-1010 sensor has a thermal resistance RTH at 100 mK of about 2 × 109 K/W, and can have an electrical resistance Re from 5 to 100 kΩ. Self-heating offset (ΔTSH) depends on the excitation power PS according to the equation ΔTSH = PSRTH = I2ReRTH.

The new Model 350 is designed to work well with Cernoxsensor resistances at 10 nA, with minimal self-heating. Under normal circumstances, this 10 nA current range would be used for measurement at 100 mK, and the resulting 6 mK offset is comparable to the total 5 mK uncertainty of a Cernox sensor. At the higher 30 nA excitation current, as was required in the comparison test, higher self-heating would be expected, but those effects would be consistent between the controllers. Lower sensor resistances could have been selected, but would have resulted in reduced sensitivity at the target temperature.

For this comparison, 300 data points were taken and the standard deviation was calculated to give an estimate of the typical RMS noise. The instruments were set to a 0.5 s filter with a sample rate of 10 Hz. This filter reduced the noise by about 2.24 (i.e., √5) for both the new Model 350 and the older model alike. Figure 3 shows the measurements from the comparison test, and clearly shows the improved noise performance of the Model 350 over the previous Model 340 controller.

Table 2 summarizes the measured results and shows the actual noise measured versus each instrument’s documented specifications. Noise measured (Ω) reflects the uncertainty in sensor resistance as measured by the instrument. The older Model 340 met its specification, while the Model 350 thoroughly beat its published specification – additional confirmation of the ability to successfully apply the new controller in extreme conditions.

Overall, the Model 350 demonstrated about half the input noise of its predecessor as a result of the updated circuitry. With this ability to use significantly lower excitation power, self-heating errors are reduced enabling higher measurement resolution speed and control stability.