We use cookies to provide you with a better experience. By continuing to browse the site you are agreeing to our use of cookies in accordance with our Privacy Policy.
×
Stay Connected :
Home » Maximizing Receiver Dynamic Range for Spectrum Monitoring

As consumers continue to demand more data wirelessly through mobile devices, the increased bandwidth to support these applications has considerable implications on the usage of the RF spectrum. Currently, 75 percent of wireless devices in the U.S. are broadband capable.1 In his keynote speech to the International CTIA Wireless 2012 Conference, FCC Chairman, Julius Genachowski talked of the “looming spectrum crunch” and made the statement that “… it is becoming increasingly harder to find free and clear blocks of spectrum.” Estimates are that between 2010 and 2015, the mobile data traffic will increase at a compound annual growth rate of 92 percent.2 This near insatiable need for more bandwidth drives the requirement for specialized equipment to monitor the RF spectrum.

Spectrum analyzers often come to mind as the receiver solution for making over-the-air spectrum monitoring measurements. Modern RF signal analyzer designs such as the vector signal analyzer (VSA) add useful features for digital signal demodulation. However, since both instruments are optimized for cabled measurements, they are subject to dynamic range limitations in spectrum monitoring applications. For this reason, a specialized receiver optimized for over-the-air measurements should be considered.

Figure 1 Distortions in the RF spectrum.

Especially when analyzing low-power over-the-air signals, both harmonic distortion and intermodulation distortion introduced in nonlinear components of the signal chain can obscure the signal of interest. Harmonic distortion, which results from a single carrier, is generated in the receiver’s first mixer and any nonlinear component in front of the first mixer. Intermodulation distortion (IMD) results from two or more carriers mixing in any nonlinear component. These closely spaced carriers can all progress through the entire receiver chain resulting in IMD from both the RF and IF sections. Spectral regrowth is distortion associated with digitally modulated signals and is a problem when this distortion leaks into adjacent channels. 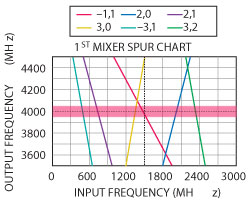 Most spectrum analyzers rely on a dual RF path architecture: lowband and highband. The highband path normally uses a YIG Tuned Filter (YTF) as a preselector in front of the rest of the signal chain. However, in the lowband path, below the operating frequency of the YTF, the RF path is most often not preselected. The typical spectrum analyzer’s lowband path is shown in Figure 2.

Mixer spurious responses are governed by: 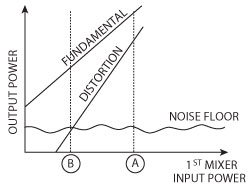 Figure 4 Power out vs. power in for receiver fundamental and distortion tones.

The m = -1, n = 1 response is the desired mixing product. An RF signal present at the tune frequency of 1.5 GHz will produce the wanted displayed response. All other lines on the chart represent spurious responses. When a spur line crosses the horizontal center band, which represents the IF port bandwidth, this signifies that the mfRF and nfLO combination produces an unwanted signal at fIF. Once this undesired signal falls on the IF frequency of the first mixer, the IF signal progresses through the rest of the receiver chain.  In this example, if an RF signal is present at 1.33 GHz, the (3,0) mixer spur response generates an unwanted response even though the receiver is tuned to 1.5 GHz. Deciphering a true signal response at 1.5 GHz from the spurious response generated by the 1.33 GHz RF signal becomes a challenge. Because the lowband path of the typical spectrum analyzer normally contains only a single lowpass filter, the first mixer is vulnerable to spurious responses generated by signals whose frequency is anywhere within the lowband frequency range.

Another form of spurious responses is due to intermodulation distortion resulting from two or more signals present at the input of the receiver. If two signals are present at RF frequencies of f1 and f2 then third-order IMD products fall at frequencies of 2 X f2- f1 and 2 X f1- f2. If there is a signal of interest whose frequency is located near one of the distortion products, it is possible to confuse the signal for the receiver-generated distortion product. One technique to minimize the receiver generated distortion amplitudes is to reduce the power levels of the fundamental tones before they reach the first mixer. In the spectrum analyzer, the RF attenuator accomplishes this task. However, reducing the fundamental signal power at the first mixer also decreases the receiver’s sensitivity. Figure 4 illustrates the concept of improved distortion performance at the expense of degraded sensitivity as a function of first mixer power level.

At point ‘A,’ the RF attenuation is relatively low, allowing the high power fundamental tone to reach the first mixer. This results in a relatively high signal-to-noise ratio (SNR) at the expense of relatively large distortion levels. At point ‘B,’  the RF attenuation has been increased to lower the fundamental tone power incident on the first mixer. While this reduces distortion signal amplitude, the consequence is degraded receiver SNR.

Vector signal analyzers are characterized by having IF bandwidths at least as wide as the signal’s modulation bandwidth. Measurements such as error vector magnitude (EVM) require sampling of the entire signal. With a wide bandwidth final IF in the receiver chain, the analog-to-digital converter (ADC) can easily be overdriven by unwanted signals when trying to maximize the SNR. Especially if the low amplitude signal of interest is close in frequency to a stronger interfering signal, the ADC may introduce harmonics and intermodulation distortion products and mask the signal of interest.

The preselector filter can either be a bank of fixed tuned filters or a tunable filter. In either case, the bandwidths of the filters should be less than one octave in order to effectively block harmonics of strong interfering signals. In Figure 6, the signal of interest is located at a frequency of f2. The preselector filter tunes to allow f2 to pass. If a large amplitude interfering signal located at a frequency of f1, such that f1 = f2/2, is present, the preselector filter prevents the receiver’s first mixer from generating 2nd harmonic distortion that would potentially mask the signal of interest.

At RF frequencies, the low quality factor (Q) of the preselector filters prevents sufficiently narrow enough bandwidth to block all interfering signals. If the signal of interest is located at a  frequency close to the interfering signal, both signals can progress through the receiver chain. The roofing filters, located at one of the IF stages, provide further suppression of interfering signals before they can reach the final IF stages or the ADC. These analog filters are a set of fixed frequency bandpass filters whose bandwidths are variable. These filters can either be configured as a bank of filters or a single filter with tunable bandwidth.

Figure 7 shows how the roofing filter is used in the spectrum monitoring system. In this figure, two large amplitude signals are close enough in frequency that the preselector filter at the RF input cannot remove both tones. The roofing filter, due to operating at a lower frequency has a Q sufficiently large enough to allow for narrow bandwidths. Roofing filters are effective when a signal of interest is located at a frequency that would fall near an IMD product generated by the two large interfering signals. When measuring the weaker signal of interest, the large amplitude interfering signals fall outside the roofing filter bandwidth. With the interfering tones attenuated by the roofing filter, the amplifier stages that follow the roofing filters no longer create significant distortion which allows the gain of these final stages to be increased. Two important results occur: one is that the increased gain helps overcome the noise figure of the ADC and the other is that the higher signal level at the ADC input improves the ADC’s spurious-free dynamic range performance. 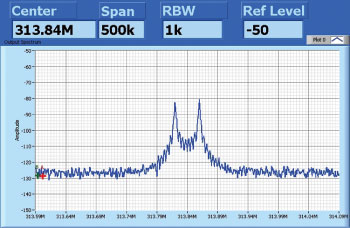 Using a spectrum monitoring receiver, the following measurement example shows how the roofing filters improve the receiver’s dynamic range when measuring an FSK modulated signal. A large amplitude interfering signal is injected such that it falls within the bandwidth of the final IF. To view the lower level FSK signal shown at the center of the spectrum in Figure 8, the receiver gain must be increased. This causes the final IF amplifiers and the ADC at the end of the IF chain to distort. This distortion manifests itself as a CW spur and with the FSK signal being mirrored about the CW spur. A user would not be able to decipher the true FSK signal and the receiver-generated distortion product from Figure 8. 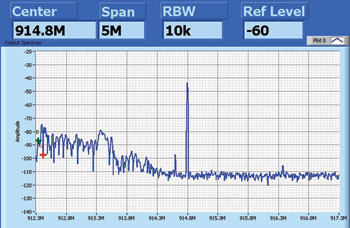 In Figure 9, a roofing filter has been selected such that the large amplitude interfering signal is blocked from progressing on to the final IF stages and the ADC. The result is improved receiver distortion performance. The true FSK signal can now clearly be seen.

In this example, a large amplitude signal whose frequency is at one-half the center frequency of the spectrum monitoring receiver is injected. When the preselector module is bypassed, as shown in Figure 10, the second harmonic generated in the receiver is clearly visible above the level of other signals in the ISM band.

In Figure 11, the preselector module is included in the receiver chain. The receiver-generated second harmonic is now greatly suppressed, allowing the other signals in the ISM band to be clearly separated from the receiver distortion products.

Over-the-air measurements of the RF spectrum are subject to unknown and unwanted interfering signals. As we have seen, traditional receiver architectures that feature a wide bandwidth RF section as well as a wide bandwidth IF section are prone to receiver-generated distortion that could mask the signal of interest. Also, simply lowering the receiver gain to improve receiver distortion performance can adversely affect the receiver’s sensitivity performance. A spectrum monitoring receiver, on the other hand, is uniquely designed to analyze over-the-air signals. By combining strategic preamplification and filtering at both the RF and the IF, a spectrum monitoring receiver provides maximum dynamic range when measuring a low level signal even in the presence of large interferes. 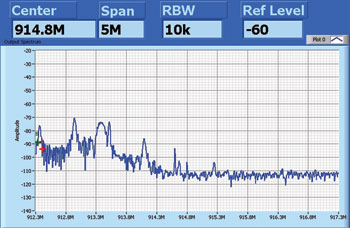