We use cookies to provide you with a better experience. By continuing to browse the site you are agreeing to our use of cookies in accordance with our Privacy Policy.
×
Home » Testing Radar and EW Systems for the Real-World
Aerospace and Defense Channel

Testing Radar and EW Systems for the Real-World

Dingqing LU, Agilent Technologies, Santa Clara, CA
No Comments
Operating in a Complex Environment
The latest generations of radar and EW systems operate in a variety of frequency bands and use wideband or UWB signals that carry highly complex modulation schemes. These systems also use advanced DSP techniques to mask or disguise their operation and thereby avoid jamming.
Within the operating environment, the complexities may include multiple targets, ground clutter, sea clutter, jamming, interference, wireless communication signals and other forms of electromagnetic noise. Depending on the type of radar or EW system, the test platform must be capable of producing a variety of signals: pulse Doppler, wideband, UW and beyond.

In the field, radar and electronic warfare (EW) systems face an environment filled with known and unknown signals: target returns, clutter, jamming, interference and electromagnetic noise. During design and development it has been difficult and costly to simulate realistic scenarios that thoroughly exercise system performance.

Today, a combination of COTS instrumentation and electronic design automation (EDA) software is making it easier to create scenarios such as multi-target returns in a complex electromagnetic environment. The software provides an environment for electronic system-level (ESL) design and includes a library of radar models. The key instruments are arbitrary waveform generators (AWG) and vector signal generators (VSG).

Complex baseband signals or sequences are created in the ESL environment and downloaded into the memory of an AWG capable of producing modulated carrier signals. If a wideband AWG is used, it can drive the I/Q inputs of a VSG to produce wideband or ultra-wideband (UWB) scenarios.

This synergistic combination of hardware and software provides a platform that can be used for component testing and scenario simulation for system test. The addition of a signal analyzer or wideband oscilloscope running vector signal analysis (VSA) software provides measurement and analysis capabilities that are useful in the development of transmitters, receivers, amplifiers and other subsystems.

To meet these requirements, two solutions have been developed: a radar target generator and a test platform for radar and EW testing. The chosen combination of software and hardware elements makes it possible to create realistic and dynamic scenarios for component and system testing. The software environment can be used for modeling, simulation, verification and testing during system design and implementation. It also has the flexibility to incorporate models created using tools such as C++, MATLAB and HDL.

Specific to radar, the ESL software provides four key capabilities: the generation of custom waveforms; support for advanced measurements; control of hardware and software instruments; and emulation of “golden” transmitters, detectors or receivers. The first step is to assemble the desired radar system within the software environment. To simulate multiple types of systems, the software lets the user specify individual components within the block diagram: signal sources, transmitter and receiver modules, antennas, RF and IF modules and signal-processing techniques. Further, measurements and the surrounding radar environment can be defined as part of the model. The software also includes links to enable the downloading of simulated waveforms to AWGs, which can play back the simulated waveforms for the testing of transmitters and receivers.

The major attributes of a radar target generator include RF details such as carrier frequency and modulation bandwidth as well as scenario parameters: number of target returns, duration of target returns, range, speed, azimuth, radar cross-section (RCS), types of clutter, jamming, interference and more. Within the ESL software, these are entered as details within the system model described above.

The configuration is shown in Figure 1. Starting on the left side, the first three elements are used to generate the signals necessary for transmitter and receiver testing. The signal analyzer is used to verify the test signals. Signal simulation also proceeds from left to right, starting with the creation of a block diagram-based radar design within the ESL software. In this case, the model used a transmitter waveform generator to produce a baseband waveform that was then modulated. Next, three target signals were created, combined with each other, combined with clutter signals and output to an antenna model. The resulting signal was analyzed within the ESL environment and, when the scenario was finalized, downloaded to the AWG.

Figure 2 shows the results from a three-target simulation with individual range values of 500, 1500 and 2500 m and velocity values of 100, 200 and 0 m/s. As shown, moving target indication (MTI) processing removed the stationary (0 m/s) target from the bottom (orange) trace.

Figure 3 shows the simulation signal created in software and subsequently downloaded to a vector signal generator with AWG capability. The four traces provide different views of the RF test signal, which is emulating radar returns from three targets.

The configuration shown in Figure 4 is a component test system in which different UWB signals can be generated in software, downloaded to a wideband AWG, upconverted by the vector signal generator and applied to the hardware component as a stimulus. The real-time oscilloscope provides waveform analysis and also supports signal analysis through the VSA software running on the PC. 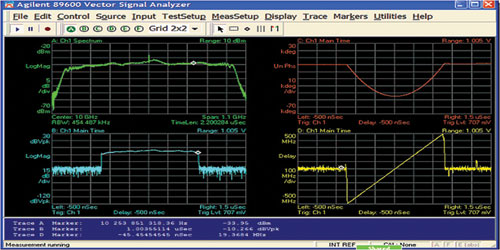 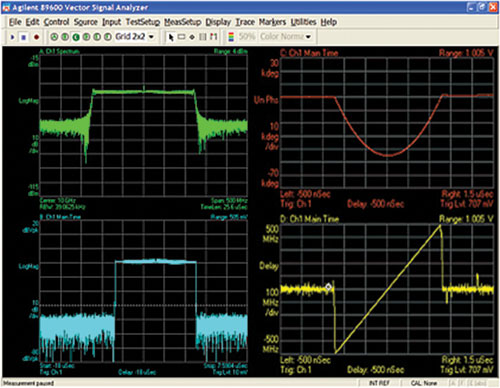 The solutions described above do more than address a wide range of present and future radar systems: They also help overcome organizational hurdles. For example, the development of complex radar or EW systems typically requires the involvement of multiple people working in teams that may be physically or geographically separated. System integration can be especially difficult without a consistent, shared set of tools for simulation and testing. The software environment described here supports team collaboration across the radar block diagram and between team members working in different locations.

Dingqing Lu has been with Agilent Technologies/Hewlett Packard Co. since 1989 and is a scientist with Agilent EEsof EDA, working on modeling, simulation, testing and implementation of Military and Satellite Communications and Radar EW systems. From 1981 to 1986, he was with University of Sichuan as Lecturer and Assistant Professor. He was a Research Associate in the Department of Electrical Engineering at University of California (UCLA) from 1986 to 1989. He is IEEE senior member and has published 20 papers on IEEE Transactions, Journals and Conference Proceedings. He also holds a U.S. patent on fast DSP search algorithm. His research interests include system modeling, simulation and measurement techniques.