We use cookies to provide you with a better experience. By continuing to browse the site you are agreeing to our use of cookies in accordance with our Privacy Policy.
Home » Compact Transistor Models: The Roadmap to First Pass Amplifier Design Success
Software/EDA Channel

Amplifier designers have been making use of modern transistor models since their first appearance in the mid-1970s. Models have allowed engineers to create advanced designs with first-pass success, without the need for multiple prototypes and design iterations. But with so many different modeling techniques, how does one select which one to use? The three most common types of models used in industry today are: physical models, compact models and behavioral models.

Physical models, as their name suggests, are based on the physics of the device technology. These models are dedicated to the transistor itself and not the overall circuit. Due to the nature of the model, complex model equations have to be used, which can lead to time-consuming simulations. The advantage of the physical model is that it can be successfully used over the largest operating range, compared to alternate methods, since equations are used to describe complex physical rules rather than actual measurement results.

Compact transistor models, based on measured IV and S-parameters, allow designers to shift focus from transistor designs to circuit designs. Extracted from quasi-isothermal pulsed IV and pulsed S-parameter data and validated with load-pull characterization, compact transistor models contain a reduced set of parameters. Unlike other model types, compact models take into account complex phenomena, such as electro-thermal and trapping effects. For simulations under nonlinear operating conditions, responses to complex modulated signals (such as EVM or ACPR) are accurately predicted as low-frequency and high-frequency memory effects are taken into account. Compact transistor models are ideal for die-level applications, as developing such a model from IV and S-parameters is straightforward and relatively quick. Packaged-transistor models need to include a die-level model as well as a bonding model and package model, and consequently can be time consuming and costly.

Behavioral models, based on frequency domain measurements, are far less flexible than physical or compact transistor models, but can be easily developed for any type of component (including die-level or packaged transistors). Behavioral models are considered “black-box” models, where only the responses of the component to some controlled stimuli are known, and are consequently only valid under the operating conditions measured. This model type is actively under development and has been recently improved to take into account memory effects,1,2 however, as a table-based model, it cannot be as complete as a formula-based model.

It is clear that each model type, physical, compact and behavioral, has unique advantages and disadvantages, as illustrated in Figure 1. While there is no one-size-fits-all model, compact transistor models offer the shortest development time for maximum flexibility with regard to die-level transistors. 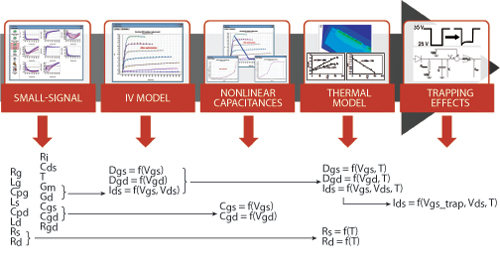 Research and development of compact transistor models has been, and continues to be, an important topic for universities and institutes across the globe.3-9 As such, an abundance of literature and documentation exists on the background R&D of compact models. This discussion will concentrate on the main topics involved with model extraction of wide band gap (WBG) field effect transistors (FET) such as gallium nitride (GaN) FETs. The perfect GaN compact transistor model needs to be accurate for device operation over temperature, bias and RF power. The design flow of a GaN FET compact transistor model, shown in Figure 2, consists of:

Additionally, the compact transistor model can be validated through load-pull measurements. 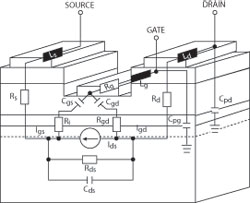 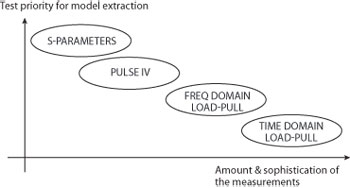 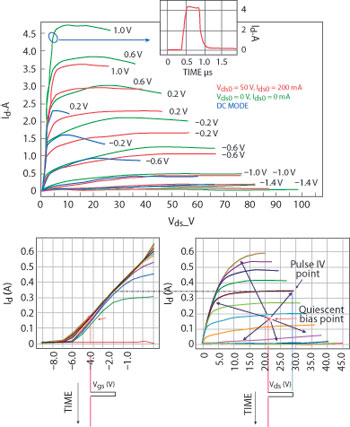 The first step in linear model extraction is to use S-parameters to determine the transistor’s extrinsic parasitic elements (Rg, Lg, Cpg, Rd, Ld, Cpd, Rs and Ls), as sketched in Figures 3 and 4. By defining a set of extrinsic elements, the S-parameter data can be de-embedded to the intrinsic reference plane and a set of intrinsic parameters (Cgs, Cgd, Gm, Gd, Cds, Ri, Tau, Rgd) can be extracted using explicit equations.10-11

During the optimization process, the goal of the linear modeling step is to determine values for the extrinsic parameters, which in turn provides a set of intrinsic parameters with a fixed value versus frequency. During the modeling optimization, measured and modeled S-parameters are compared over the entire RF bandwidth. The measured S-parameters are converted to the corresponding [Y] and [Z] parameters, so that both [Y] and [Z] parameters can be compared at both intrinsic and extrinsic reference planes.

Nonlinear model extraction uses pulsed IV measurements to study the effects of temperature-dependent performance (including self-heating) in safe operating regions and to study the breakdown area of the transistor (see Figure 5).12 Pulse widths are kept sufficiently short in order to avoid a strong temperature variation during the pulse duration and the duty cycle is kept sufficiently low in order to avoid a mean variation of the temperature, so that the transistor’s pulsed IV measurements are obtained under quasi-isothermal operating conditions.

It is necessary to determine the transistor’s thermal impedance in order to complete an electro-thermal model that can dynamically predict performance as a function of device temperature (chuck temperature) and self-heating.9,13 To extract the thermal impedance, two sets of measurements are performed. 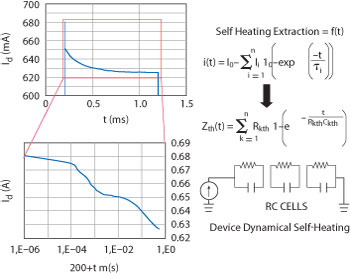 First, IV measurements are performed under both continuous (DC) and short-pulsed conditions in order to extract the thermal resistance. As shown in Figure 6, longer pulses are then applied in order to study the current decrease with time and extract the thermal capacitance. How the temperature (and therefore performance) varies with time is related to the transistor’s design, number of layers, type of carrier, heat sink, etc.; the thermal impedance can be modeled by a combination of several thermal resistances and several thermal capacitances representing various time constants. This thermal circuit provides the equivalent transistor junction temperature as a function of DC power and is used in the various sub-circuit models (resistances, current source, diodes and breakdown circuits) that are linked to voltages, currents and temperatures.

In the example shown in Figure 7, the input current diodes must be modeled by equivalent nonlinear current sources that are able to generate a positive gate current when the transistor is biased in forward model with low Vds and high Vgs values, and able to generate a negative current for high Vds and pinch-off Vgs values. To ensure convergence, the output current source model has to be continuous at n-order for any Vgs and Vds values. The AMCAD-FET model uses a current source model that can be formulated using the following equations:

where α1, α2, Vgs1, I1, λ, Vdsp and Rds0 are parameters. The “Fa” function defines a lower limit to a related function from an arbitrary value U0 with an adjustable smooth transition parameter Ru. The “Fp” function is an n-order polynomial with two variables (Vgs, Vds). Additionally, measurements can be repeated at various chuck temperatures when measuring on-wafer. This allows a temperature-dependence variable to be determined and applied to the model. 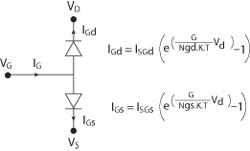 The feedback capacitance Cgd depends heavily on the drain voltage; therefore, it must be included to fit large-signal operating conditions. The Cgd capacitance model is defined by the equation 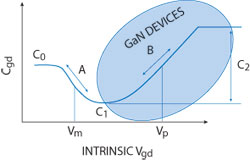 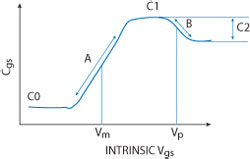 The output capacitance Cds is linear; no voltage dependence is taken into account due to the weak influence for amplification purposes.

Nonlinear model extraction also takes advantage of pulsed IV measurements to isolate the trapping effects as a function of quiescent bias condition. Trapping effects are parasitic effects that reduce the maximum output current; the charging and discharging of traps influences Ids and leads to current collapse. Trapping corresponds to the existence of energy states, which can be occupied by holes or electrons in the gap. These holes or electrons are trapped at these levels over a time period and cannot take part in conduction, hence the term trap. Trapping is the result of impurities or defects in the crystalline network of the material from which the transistor is composed, and alters the electric behavior of the transistor at microwave frequencies.

Pulsed IV measurements are used to study the individual trapping effects and differentiate between surface trapping (gate-lag) and buffer trapping (drain-lag). When performing pulsed IV measurements, it is important to ensure the IV pulses are shorter than the emission time constant of the traps. It is also important to maintain a constant temperature throughout the measurement to be certain that the device changes are due to trapping effects and not temperature changes.

Gate-lag is mainly attributed to surface trapping effects. In order to isolate these effects, two series of measurements are made with identical dissipated powers equal to zero. When performing pulsed IV measurements, the two quiescent bias points chosen are: 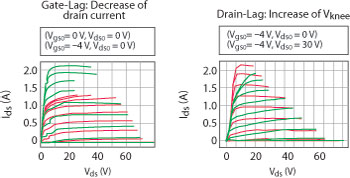 Vp is the pinch-off voltage applied on the gate. Because both dissipated powers are zero, any difference between IV characteristics can be attributed to the presence of gate lags.

Drain-lag is mainly attributed to buffer trapping effects. In order to isolate these effects, two series of measurements are made with identical dissipated powers equal to zero. When performing pulsed IV measurements, the two quiescent bias points chosen are:

Examples of typical gate-lag and drain-lag IV curves are shown in Figure 10.

These parasitic phenomena can be modeled by a trapping circuit composed of gate- and drain-lag sub-circuits that are connected to the gate command15 in order to drive the output current as a parasitic phenomenon. The lagging hysteresis can be modeled by a circuit that contains a diode element that will reproduce the dissymmetry between the capture and emission times.16 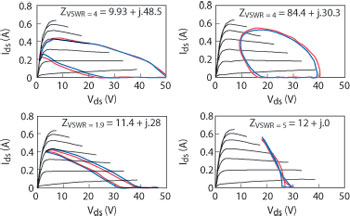 Time-domain load-pull measurements may also be used for model validation.19 In addition to the parameters obtained from a frequency-domain system, time domain load-pull allows for the measurement of voltage and current waveforms and load lines. When correctly calibrated and de-embedded to the intrinsic transistor reference plane, the RF load line can be displayed and superimposed onto the transistor’s IV characteristics, and a comparison between measured and modeled results can be made, as shown in Figure 12. Time-domain voltage and current waveforms and load lines can be used to verify whether the transistor is operating close to RF breakdown, or used to confirm class of operation (A, AB, C, E, F, F-1, G…).

Amplifier designers are under more stress than ever to release effective products in the least amount of time and maximize profitability; meaning first-pass design success and being first-to-market. Gone are the days when engineers could cut and paste, design by trial and error, and work at their own pace to release innovative products. Compact transistor models are the first and most crucial step in a successful MMIC design flow and, when used in conjunction with circuit simulators, can lead to first-pass design success and first-to-market.